Release Day ARC Review and Spotlight: My Dragon, My Knight by John Inman

My Dragon, My Knight 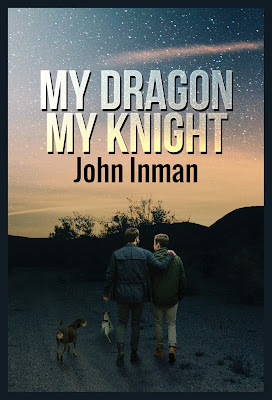 Danny Sims is in over his head, torn between his abusive lover, Joshua, and Jay Holtsclaw, the bartender up the street, who offers Danny the one thing he never gets at home: understanding.

He runs.
But Danny isn’t a complete fool. He has enough sense to run into the arms of the man who actually cares for him—the man he’s beginning to trust.

Just as their lives together are starting to fall into place, Danny and Jay learn how vengeful Joshua can be.

This book is a lot darker than John Inman's usually sweet, funny, and somewhat fluffy romances. Sure, there's a bit of humor in this one too, and a sweet relationship as well, but there's a lot of darkness too. Quite a bit of suspense inside too, not in the usual whodunit sense, because it's clear from the start who the villain is, but I was on the edge of my seat for the last half of this book, because I knew, I just knew, that... well, you read this for yourself.


Danny Sims, one of the MCs, is in the above mentioned abusive relationship with his older boyfriend Joshua, asshole first class, and doesn't know how to escape the ever-tightening shackles he wears day in and day out. Having fallen into this trap, he now feels dependent on his abuser, without any friends or anyone to help him. My heart broke for him from the first chapter, and I hoped that he would find the courage to run.

Jay Holtsclaw is a bartender/owner of a bar not far from where Danny lives with his abuser, and takes a shining to the young man sitting at his bar with what is going to be quite a bruise on his jaw.

I liked Jay from the start. He was unassuming and kind, while at the same time only offering friendship to Danny, knowing that the younger man was in a relationship.

Danny's little dog is a thorn in the abuser's side, and when he goes after the dog one morning, Danny scoops up his pooch and runs.

And Jay offers the safety of his arms and his home, and Danny learns to breathe again.

What develops next is a wonderful new relationship for these two as they make a home for Danny in Jay's mountain house. Their initial friendship slowly turns into more, and Danny learns that love is patient and kind and supportive and encouraging. Danny learns to trust.

The writing here is emotional and really tugged on my heartstrings. The more I found out about Danny's life with the abuser, the angrier I became, and the more I cried for this sweet young man trapped in such a loveless relationship, controlled by an abusive asshole who didn't know love at all. But I also smiled with Jay and Danny as they forged a new life together, rejoiced at Jay's tenderness and Danny's awe, and even giggled on occasion, though underneath all of those smiles and giggles, I feared. The author really kept me in suspense - again, not so much as to who was the villain, but as to what the hell he would come up with next. There was obviously the calm before the storm, then a few quick showers, and then all hell broke loose.

I cried hot tears for Ernie. Sweet, helpful Ernie who loved Jay so much and who gave it everything he had.

But when the storm finally came, I was also ready for the abuser to meet his well-deserved ending. Thank goodness for George.

Who's George? Well, you read and find out. I'll just say it was very fitting that George would be the one to deal the final blow.

So, yeah - darker than what I'm used to from this author, but oh so well plotted and written and oh so fantastic to read.

Get yourself a copy. It's available now from Dreamspinner Press.

** I received a free copy from the publisher. A positive review was not promised in return. **

John Inman is a Lambda Literary Award finalist and the author of over thirty novels, everything from outrageous comedies to tales of ghosts and monsters and heart stopping romances. John Inman has been writing fiction since he was old enough to hold a pencil. He and his partner live in beautiful San Diego, California. Together, they share a passion for theater, books, hiking and biking along the trails and canyons of San Diego or, if the mood strikes, simply kicking back with a beer and a movie.