Book Review: Between These Sheets by Devon McCormack 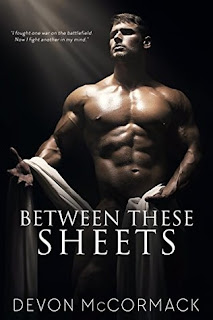 “I fought one war on the battlefield. Now I fight another in my mind.”


Jay is always on the run—always looking for the next place to start a new life. But no matter how much he moves, he can’t escape the painful memories that haunt him. As he settles into his latest job in the warehouse at a glass bottle factory, he finds himself the target of his co-workers’ teasing. When he takes a stand against one of the bullies, a fight breaks out. His boss, a war vet named Reese, steps in, and Jay accidentally shoves him to the ground, revealing Reese’s prosthetic leg. Jay’s sure he’s gonna lose his job, but he’s blown away when he’s given another shot.

Reese is annoyed by the new guy. Jay is reckless and temper prone. Maybe Reese shouldn't have given him a second chance, but his attitude reminds him of his war buddy—a guy who he cared deeply for and who he lost under tragic circumstances. He just hopes Jay doesn’t let him down.

When an accident in the factory triggers one of Reese’s PTSD episodes, Jay returns the favor by being there for him and keeping anyone else from discovering the incident. Reese wants to move on and forget it ever happened, but Jay won’t let it go. And as much as Reese tries to keep his distance, there’s a heat—a passion—between them that he can’t resist. It leads them to the bedroom again and again, but Reese quickly realizes they’ve ignited more than the sparks they create between the sheets. And despite the tough-guy façade Jay puts on, underneath there’s a soul just as tortured and hurt as he is. He’s starting to fall for Jay, but he knows there’s a dark storm lurking in the back of his own mind—a storm that will return one day and destroy the beautiful connection they share.

Between These Sheets is a standalone romance novel with no cheating, no cliffhangers, and a happy ending.

I was mightily impressed with the writing in this book. It's like with every book this author releases, the writing gets better.

I also was mightily impressed that such difficult topics as PTSD and psychological trauma were handled with realism, insight, and depth.

Jay is the new guy at a factory, having recently moved to town. He never stays long in one place, preferring to run when the going gets tough, always trying to escape the memories of the past that are still haunting him.

Reese is the supervisor at the factory, and annoyed with Jay's being prone to temper tantrums. He sees that the tough guy persona Jay shows to the world isn't what's beneath the shell, and when Jay gets himself into trouble on the factory floor, Reese lays down the law, but gives him another chance.

See, Jay reminds Reese of someone he used to know, someone he couldn't save, someone who saw too much and never got help to learn to live after traumatic experiences in war zones.

Shortly after Reese has a come-to-Jesus meeting with Jay, a loud noise sends Reese into a PTSD tailspin, and Jay instinctively knows how to protect the other man. And then educates himself on the topic.

Their physical attraction is fiery, and they burn up the sheets. The bedroom is also initially where they are fully equal, not boss and employee, but simply two men scratching an itch. Well, at least at first it's just an itch. And then it becomes much more. Which is of course what I expected.

However, their ultimate happy ending, as promised in the blurb, is not something that comes easy. The men have to fight for it, find compromises, realize that a strong connection such as theirs doesn't come along all that often, and that they're worth fighting for. They have to overcome their personal demons, and the author did a fantastic job describing their struggles, and making me root for them both. With each setback, with each insecurity raising its ugly head, I watched them push forward and fight to get what they want, while I was cheering them on. Neither one gave up, even when it sometimes seemed easier to let go than keep holding on.

I really liked how the author allowed each man to find his stride, how both Reese and Jay grow (and in Jay's case, grow up) in realistic increments as the book progresses, and how sometimes the goal is reached with two steps forward, and one step back. The fact that the book is written in the first person present tense also really helps the reader feel as if we are right in the middle of their developing relationship, and really conveys the emotional aspects of this love story.

This was the best book I've read by this author thus far, and I am definitely looking forward to more.