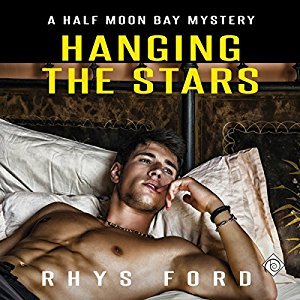 
Angel Daniels grew up hard, one step ahead of the law and always looking over his shoulder. A grifter’s son, he’d learned every con and trick in the book but ached for a normal life. Once out on his own, Angel returns to Half Moon Bay where he once found…and then lost…love.

Now, Angel’s life is a frantic mess of schedules and chaos. Between running his bakery and raising his troubled eleven-year-old half-brother, Roman, Angel has a hectic but happy life. Then West Harris returns to Half Moon Bay and threatens to break Angel all over again by taking away the only home he and Rome ever had.

When they were young, Angel taught West how to love and laugh but when Angel moved on, West locked his heart up and threw away the key. Older and hardened, West returns to Half Moon and finds himself face-to-face with the man he’d lost. Now, West is torn between killing Angel or holding him tight.

But rekindling their passionate relationship is jeopardized as someone wants one or both of them dead, and as the terrifying danger mounts, neither man knows if the menace will bring them together or forever tear them apart.

I loved 'Fish Stick Fridays' and Rhys Ford is a favorite of mine so I think it goes without saying that I'd be reading this book...but, things got even better when I was able to request the audio book. I admit I was nervous because...kids...me and kids in audiobooks... mmmm...not doing well. I have yet to meet one that I like...wait, I meant to say I had yet to meet one that I liked because I can now say that I've met 2. Zig and Roman. We're talking an 8 year old girl and an 11 year old boy and both of these characters voices worked for me. I did not want to strangle either of them. Their voices were neither irritating or whiny nor were they irritatingly whiny!!! I was over the moon, over joyed! Seriously I want to listen to the audiobook all over again just for that experience. So I just need to say...
"Greg Tremblay....I tip my hat to you because I really despaired of this ever happening."

Now as for the story. 'Hanging the Stars' is the story of Lang's twin brother West. We met him in 'Fish Stick Fridays'. Initially when his character came on page I was pretty sure I wasn't going to like him but surprisingly he wasn't a total tool and I found him to be a brother who sincerely cared.

When West was younger he met a boy named 'Angel' they had a wonderful summer together and fell in love. Unfortunately life and Angel's con-artist father and West's overly controlling father tore them apart and now after years and miles of separation fate has brought them back together, but a lot has changed. West has his heart firmly locked down. Angel has his hands full with keeping his bakery going and taking care of his 11 year old brother Roman, who in spite of his challenges is far more enterprising than an 11 year old should be. Needless to say Roman and Zig are friends...heaven help the world because these two will be taking over soon.


While there was a lot more going on in this book than the first one and it did just fine. I liked that this story gave us more of Lang, Deacon and Zig. I really enjoyed how much West grew as he and Angel worked to sort out their lives together, I also liked seeing West sort out himself as he developed a relationship with Roman and came to realize how much he'd missed out on with his own brother and what he lost out on by letting his father control him.

In general I enjoyed 'Fish Stick Fridays' just a tiny bit more and if I'd read the e-book this probably would have sat somewhere between 4 - 4.5 stars for me but because I still love Zig, I'm saying "What the hell?", bumping it up to 5 stars and calling it a day.

An Audiobook of 'Hanging the Stars' was graciously provided by the publisher in exchange for an honest review.