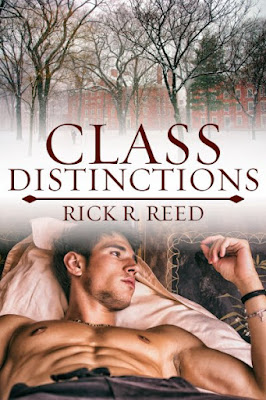 
Kyle and Jonathan were perfect for each other, the two halves that, once together, made a whole. And then one snowy night just before Parents’ Weekend on the campus of Hamilton University, Kyle drops a bomb: he’s breaking up with Jonathan.

Follow the couple through the stormy (in more ways than one) night that ensues. Why has Kyle suddenly decided to throw away something so precious and good?

The answers lie in their backgrounds, and will gradually come to light as a winter blizzard rages around the young couple.

Their tortured paths bring them to the covered bridge where their love had sprung to life on a hot summer day. But will the warmth of that memory and the heat of the love they once shared be enough to outclass the storm, and more importantly, bring them back together?


Jonathan got up, grinning, and crossed the room, ready to fling open his door and his arms to Kyle. He could picture his boyfriend in his mind’s eye: the short muscular build, the hazel eyes, the mop of curly sandy hair that blended so perfectly with the constellation of freckles across his nose. He thought of the little tragus piercing in Kyle’s ear that for some inexplicable reason, Jonathan adored and could always be counted upon to play with his tongue, which drove Kyle nuts. The knock sounded again, and Jonathan took exactly three seconds to check his image in the mirror above his dresser. His blond hair had been cut that morning and, with a little dab of gel, looked stylish and alluring, the classic combo to his pale blue eyes and dark lashes. He wore only a plain white T-shirt and a pair of plaid boxer shorts. He figured they’d be naked soon enough, so why bother with a complicated ensemble that would only slow them from getting to the main course?

Jonathan would swear his heart began to beat faster and he got a little breathless as he approached the door. He couldn’t stop the beaming smile that spread across his face as he reached for the knob.

But that smile vanished when he saw Kyle standing out in the hallway, staring down at the floor and radiating dejection. His shoulders slumped and there was about him an overall lack of energy. When he managed to tear his gaze away from the tile floor, he looked at Jonathan with sadness. Jonathan frowned too when he could discern no excitement, no joy to see him, in those hazel eyes.

This was not the picture he had been anticipating when he swung open the door.

“Good God, Kyle, what’s the matter? Is everything okay?”


Kyle’s gaze returned to the floor and Jonathan shook his head, reached out and forcibly pulled his boyfriend inside the room, closing the door behind him. Jonathan cocked his head, “What’s wrong, sweetheart?” He smelled cooking grease on Kyle, the after-effect of toiling in the Hamilton University student cafeteria. Normally, he would suggest the two of them slip down the hall and into a shower together -- a nice, sudsy, both clean and dirty beginning to their three-day weekend.

But the game plan seemed to have changed. Kyle’s bad mood, so rare and unexpected, cast a pall on the anticipation Jonathan had felt only moments ago.

Jonathan turned down the music, which was Moby’s “We Are All Made of Stars” and said, “Sit down, Kyle. Let’s talk. It’s obvious from your face, hell, from even the way you’re standing there that something is very wrong. What is it? Trouble in one of your classes? Is that Psych bitch giving you problems again?”

Kyle slumped down in one of the desk chairs, his long legs extended before him, the rest of his body sort of curled into itself. Jonathan wondered why Kyle didn’t take a seat on the bed, so they could at least sit side-by-side, but he let the move pass without comment.

“No. Everything is cool in my classes. In fact, I’m on track to make the dean’s list this quarter.” Not even a glimmer of a smile heralded this happy news. Kyle simply continued to appear distant and, yes, forlorn.

“So what then? Work? Trouble at home?”

Kyle snickered when Jonathan mentioned home -- and Jonathan had no idea why. One of the mysteries with Kyle was that he had never been too forthcoming about his home life, only that he was from a small town in eastern Ohio, on the Ohio River, and that he was an only child. Jonathan still had no idea what his parents did for a living or how he even felt about his old hometown. Kyle shook his head. “No. And no.”

Jonathan didn’t want to entertain what the other possibility could be. He sank down onto his bed, nausea rising in his gut as he pondered being told Kyle had cheated on him (he was, at least in Jonathan’s mind, about the most handsome hunk on the campus of Hamilton University), or that he “wanted to see other people” or that he “needed a break” or that “it’s not you, it’s me” and he needed to end things between them.

But none of those scenarios could possibly be true, could they?