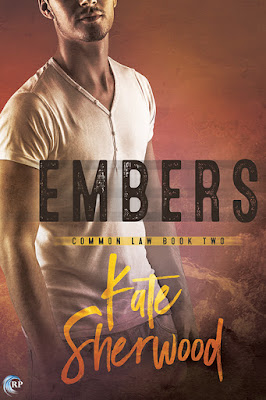 He doesn’t really need a biker war on top of it all, but as the bodies start to pile up, it becomes pretty clear that’s what he’s got. Not only that, but Wade’s involved somehow, and as soon as Wade is a part of something, things that seemed clear become cloudy.

With the feds breathing down his neck, Jericho has to find his way through Wade’s maze of half truths and manipulations. It would all be so much easier if Jericho could think straight in the other man’s presence. So much easier if their passionate past could be forgotten, and if he could be sure he’s strong enough to resist the temptation of a passionate present.

Our interview with Kate Sherwood:

Characters, for sure. Writing a book, for me, is essentially a character-based puzzle—I know where they are at the beginning and where I want them to be at the end, so the writing process is based on figuring out realistic but dramatic ways to get them where I want them to be. So I’m inspired to write because I enjoy working on that puzzle.

I always want to plan things out, but as soon as I start writing, any plan I’ve come up with goes out the window. I think maybe it’s because my plans tend to be more plot-based, but my stories are really character-driven. So when I start writing and figure out something new about one of my characters, there goes the plan, because the character has changed a little and the new character would never do what the plan demands, plot-wise…

So I generally start writing at the start of the book and work through to the end in order. I’ll make notes for myself right in the text, usually with some easily-searched symbol (YYY, usually) so I can zip through and find the notes later. Things like “Hockley more sympathetic from here on—rewrite earlier Hockley” or whatever. So when the first draft is done I can go back and address those notes and smooth everything over.

I love whoever I’m currently working on. I’ve got a soft spot for Dan from the Dark Horse books, I think mostly just because I wrote so damn much of him. But other than that? Whichever character is most messed up in whichever book I’m currently writing is my favourite. (Which means right now it’s Trey, from my Shelter series—he’s physically tough and puts on a really good show, but underneath it all he’s just looking for love, and has no idea how to get it.)

And interestingly, since I usually prefer the more damaged character, I’m about equally fond of Wade and Jericho in Common Law—which makes sense, since I’d say they’re about equally damaged.


I try really hard to avoid one-dimensional villains, or really “villains” of any sort. I don’t always have the time/space to go into the details, but in my mind even the clearly antagonistic characters in my books are the heroes of their own stories. They’re doing what they think is best, even when I totally disagree with them…

So I don’t think I really have a least favourite character. I’ve got a soft spot for just about all of them!

I would definitely be tempted to rewrite some of the Dark Horse books to be tighter and less wandering… those were the first novels I wrote and I didn’t really understand about time lapse; I couldn’t figure out how to just have a character be somewhere else in time later in the book. So, for example, if I showed Dan going to bed at night, I’d show him waking up the next morning rather than skipping ahead to the next important scene. But I could tell I wasn’t supposed to be writing like that (why would anyone want a detailed description of Dan’s breakfast or whatever) so I kept adding in extra elements (like that he doesn’t eat enough, or whatever) to fill the space, and then once I’d mentioned that detail once I couldn’t just leave it so I’d have to refer to it again, and… the whole thing ended up sprawling all over the place.

But then I get reader feedback about how much they loved climbing inside Dan’s life, so… just because I’d change it doesn’t mean it should be changed!


6. What's next for you? What amazing book are you working on?

I’m currently working on finishing up the fourth and final book in the Shelter series—tough guy Trey and preppy Sebastian find love in the Seattle streets! And I have some projects underway for my m/f pen name (Cate Cameron) and some previously published Kate Sherwood books that need to be re-published, but other than that? I’m at loose ends, which is an experience I haven’t had for a few years now! I’m tempted to work on a contemporary-monster-hunters project I’ve been playing with for a long time, but I think it’s got a lot of series potential and I’m feeling a bit bogged down by all the series books I’ve been working on lately. It’d be nice to just write one book and be done with things for a change! So… not sure! Kinda a fun position to be in.


To celebrate the release of all four books in the Common Law series, we’re giving away one four-tour-wide GRAND PRIZE of $100 in Riptide credit! Enter at each stop on each tour (once they go live) to maximize your chances to win! Leave a comment with your contact info to enter the contest. Entries close at midnight, Eastern time, on April 8, 2017. Contest is NOT restricted to U.S. entries. Thanks for following the Embers tour, and don’t forget to leave your contact info!