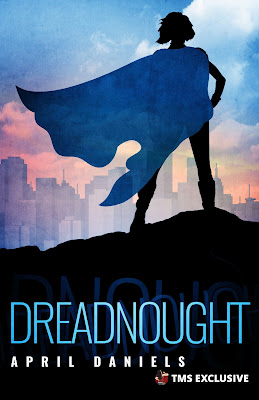 Danny Tozer has a problem: she just inherited the powers of the world's greatest superhero. Until Dreadnought fell out of the sky and died right in front of her, she was trying to keep people from finding out she's transgender. But then her second-hand superpowers transformed her body into what she's always thought it should be. Now there's no hiding that she's a girl.

It should be the happiest time of her life, but between her father's dangerous obsession with curing her girlhood, her best friend suddenly acting like he's entitled to date her, and the classmate who is secretly a masked vigilante, Danny's first weeks living in a body that fits her are more difficult and complicated than she could have imagined.

She doesn't have much time to adjust. Dreadnought's murderer, a cyborg named Utopia, still haunts the streets of New Port City. If Danny can't sort through the confusion of coming out, master her powers, and stop Utopia in time, humanity faces extinction.


Chapter 7
I fly. It’s easier to get home than it was to reach Legion Tower. After I stash my clothes in my room I consider trying to sleep, but my head is whirling. It feels like it’s been weeks since I left. The clock says it’s been about eighty minutes.
My cape snaps as I leave again, boosting for altitude. Below me the lights of my street drop away like candles off a cliff. The rage comes back, hot and thick, and I’m screaming. I’m screaming like I never have before. My voice echoes in the night air, reflects my fury back at me. It is a girl’s rage, and it is right. It is necessary.
The clouds are low and glowing orange with reflected city lights. I punch through them, up into the hard clear night beyond. The temperature is dropping quickly, and I nose over, fly for open water. I reach for more power, more speed, and the mantle answers me. My power surges—and it is my power—until the wind tears at me with feeble fingers, until it seems the world itself is scared of me, begging me to stop. I will never stop. I will never give this up. I will never be what they want me to be.
The rumbling pressure builds at my forehead, pushes down around my shoulders, hangs for a moment, and then explodes in a cloud of vapor. I pass through to the other side of the sound barrier, to a world of silence and pressure. My screams slip away from me, gone before they reach my ears. It seems to bottle the fury. Bottle it, compress it, make it burn hotter and brighter.
Fifteen years trapped. Seven of those, aware of my prison and screaming inside.
The shelter of boyhood ended, and they called me a young man. For no reason at all, they looked at the things that felt right to me, and they took them. Even down to the way I carry my books and cross my legs. They took it. They took everything. Puberty came, and my body turned on me, too. Watching every part of myself I liked rot away one day at a time, the horrified impostor staring back at me. Watching the other girls, the ones they let be girls, head in the other direction. Every day, torn away further from myself, chained down tighter. Suffocated. Strangled.
They’ll make a man of me. Show me how to be a man. Teach me to man up by beating me down.
THEY NEVER ASK IF I WANT TO BE A MAN.
And now I’m finally free. I’m finally myself, inside and out.
So they spit on me. They’re embarrassed by me. They hate me.
FOR A MISTAKE THAT THEY MADE.
They want me to cooperate in my own destruction. They want me to tell them it’s not true. They want me to help them believe the lie.
NEVER AGAIN.
I tip over, and shoot back down through the clouds. Five seconds later the ocean slams into me like a cement wall. The water is cold, and grips me tighter and tighter still as I go down. The black is absolute. The water wants to crush me like a soda can, but it can’t. The pressure breaks itself against me. My ribs should shatter. My lungs should collapse. I hold. Effortlessly.


The sea floor rises to greet me, and though I can’t see anything, I know it’s there. I can trace the tangles in the lattice spreading out beneath me, a rolling smooth floor all the way out to the continental shelf. The mud is soft against my boots when I touch down. I can hear for miles. Whales call. Dolphins click. Schools of fish swirl and bloom.
Down here, in the heavy cold, there is peace. This scalding outrage cools and hardens to something stronger than diamond, and infinitely more precious. Resolve.
The water bursts and leaps after me when I leave it, a white geyser a hundred feet tall. I push for speed. Higher and faster, until the seawater that’s left on me freezes and cracks away. Up, past the clouds and the birds, past the jets and the atmosphere. I let go of the speed and coast, floating so high the planet curves away from me in all directions. Earth is gauzy blue at the edges. There are lightning storms in Canada, and wildfires in Mexico. All of humanity is pinpricks of light beneath me. The silence up here is perfect. I can see forever.
And I see.
I see a world that is terrified of me. Terrified of someone who would reject manhood. Terrified of a girl who knows who she is and what she’s capable of. They are small, and they are weak, and they will not hurt me ever again.
My name is Danielle Tozer. I am a girl.
No one is strong enough to take that from me anymore.

April Daniels was born in a military hospital just before it was shut down for chronic malpractice—in hindsight, that should have been an omen. After various tribulations in childhood and the frankly disconcerting discovery that she was a girl, she graduated from UC Santa Cruz with a degree in literature, and then promptly lost her job during the 2008 stock crash and recession. After she recovered from homelessness, she completed her first manuscript by scribbling a few sentences at a time between calls while working in the customer support department for well-known video game console and has been writing ever since. Visit her online at www.aprildaniels.com.