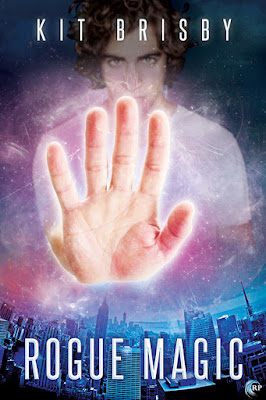 While trapped in a stalled subway train on his morning commute, PR rep Byron Cole flirts with Levi, a young waiter with adorable curls. But Byron's hopes for romance crash and burn when Levi saves him from a brutal explosion—with outlawed magic.

When Levi is imprisoned, Byron begins to question everything he's ever believed. How can magic be evil when Levi used it to save dozens of lives? So Byron hatches a plan to save Levi that will cost him his job and probably his life. If he doesn't pull it off, Levi will be put to death.

Byron discovers that he isn't the only one questioning America's stance on magic. And he learns that Levi is stubborn, angry, and utterly enchanting. Time is running out, though. Byron must convince Levi to trust him, to trust his own magic, and to fight against the hatred that’s forced him to hide his true nature his entire life. The more Levi opens up, the harder Byron falls. And the more they have to lose.


Kit Brisby lives in Tampa Bay, Florida, with her two young sons and two rescue dogs. A graduate of the University of Florida, she's been writing professionally since 2002. Her career has taken her from writing think pieces on breastfeeding to writing erotica for the adult industry—and nearly everything in between. She works in digital marketing and helps businesses find and tell their stories.

Kit is always trying to find balance between working full-time, revisiting or writing books every night, and modeling badass behavior to her two boys. Sometimes the lure of Tumblr interferes with all of that balancing. She's just old enough to still be utterly enchanted by animated gifs.

A single mom and aspiring yogi, Kit is open about her struggles with anxiety and the importance of self-care. She also advocates for neurodiversity and acceptance of those on the autism spectrum. Few things get her as riled up as bisexual erasure.

Though she lives in the South, Kit is a NYC girl at heart, and makes a point of traveling to the city as often as she can to catch a few shows and eat as much ramen as humanly possible.

She reads avidly, and gravitates toward historical queer romance and young adult fantasy, especially when the stakes are high. She's a fan of awkward first dates unless she's participating in them, and is outspoken about embracing kink and sex positivity.

To celebrate the release of Rogue Magic, one lucky winner will receive a yoga mat from Kit and a $15 Riptide credit! Leave a comment with your contact info to enter the contest. Entries close at midnight, Eastern time, on February 4, 2017. Contest is NOT restricted to U.S. entries. Thanks for following the tour, and don’t forget to leave your contact info!

Matched To His Wolf  An M/M Mpreg Shifter Dating App Romance  (The Dates of Our Lives Book 1) Author: Lorelei M. Hart and Colb...