Audio ARC Review: When All The World Sleeps by Lisa Henry & J.A. Rock 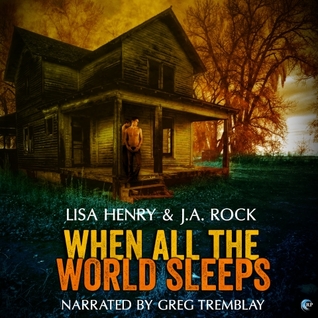 
Daniel Whitlock is terrified of going to sleep. And rightly so: he sleepwalks, with no awareness or memory of his actions. Including burning down Kenny Cooper’s house—with Kenny inside it—after Kenny brutally beat him for being gay. Back in the tiny town of Logan after serving his prison sentence, Daniel isolates himself in a cabin in the woods and chains himself to his bed at night.

Like the rest of Logan, local cop Joe Belman doesn’t believe Daniel’s absurd defense. But when Bel saves Daniel from a retaliatory fire, he discovers that Daniel might not be what everyone thinks: killer, liar, tweaker, freak. Bel agrees to control Daniel at night—for the sake of the other townsfolk. Daniel’s fascinating, but Bel’s not going there.

Yet as he’s drawn further into Daniel’s dark world, Bel finds that he likes being in charge. And submitting to Bel gives Daniel the only peace he’s ever known. But Daniel’s demons won’t leave him alone, and he’ll need Bel’s help to slay them once and for all—assuming Bel is willing to risk everything to stand by him.

Daniel Whitlock walks in his sleep and that wouldn't be so bad if it was all that he did in his sleep but it isn't and now after years in prison having paid his debt to society. He's trying to rebuild his life...to rebuild  himself...but, that's a lot harder than it sounds when people won't let go of the past, won't accept why things happen.

Joe 'Bel' Belman's one of those people. He just can't believe that Daniel wasn't aware, wasn't cognizant of what he did the night Kenny Cooper died. It's only as he begins to witness Daniel's erratic behavior, his confusion and terror at suddenly finding himself places he doesn't remember going, saying and doing things that he later has no memory of that Joe begins to truly question what he thought he knew.

But it's not until Bel rescue's Daniel from his own house as it burns that he truly realizes the fear that Daniel lives with...fear of what he'll do once he falls asleep, fear of how vulnerable he becomes as he tries to keep the world safe from him. Bel agrees to help Daniel by being with him at night and keeping him from leaving his home and what starts as simply doing his duty to help keep his community safe turns into so much more for both men. What begins as duty soon becomes friendship for these two men and slowly turns into so much more but it's not an easy path they've chosen. Small communities can be as mean and vindictive as they are kind and caring. Memories are long and forgiveness is short, especially when things aren't all that they seem to be.

"When All the World Sleeps" is not an easy story. It's dark and heartbreaking...filled with pain, fear and suffering but it's also graced with love, hope and acceptance as Daniel and Joe struggle to find their way together and build something good and loving.

This is actually my second time out of the gate with this one. The first time was back in 2014 when the e-book was released, I gave the book 5 stars then and I stand by that rating now for both the e-book and the audiobook as well.

Greg Tremblay did an amazing job with the narration on this. I was honestly as enthralled by his narration as I was by the story itself. He captured Daniel's sense of hopelessness and his fear and frustration so perfectly as well as Bel's determination and his own frustrations with how people reacted to Daniel and the moments when Del tried to make Daniel see himself as someone so much better than he believed himself to be. I'm not one who's prone to just sitting and listening with audiobooks I'm usually doing other task as I listen but I found myself on more than one occasion just sitting with my eyes closed as I absorbed this story into my heart while Mr. Tremblay read to me. I know that doesn't seem like much but I know me and I know that this speaks to how much I was enjoying the audiobook.

If you enjoy audiobooks add this to your must have list. At 12 hours and 11 minutes it's definitely the longest book I've listened to yet and one of the best.

An audio ARC of "When All the World Sleeps" was graciously provided by the publisher in exchange for an honest review.