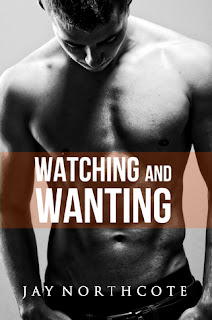 
Shawn is adrift. Recently graduated, he’s stuck in a dead-end job that barely pays the bills. His girlfriend dumped him, his friends have moved on, and he’s still in Plymouth—going nowhere.

This is yet another scorching addition to Jay Northcote's Housemates series. You may remember Shawn from the third book; he's the straight "bro dude" who lives with Jez, Mac, and Dev. Shawn's life is stagnant, and he's been recently dumped by his long-term girlfriend.

When Shawn walks in on Jude, his hot flatmate, naked in front of a camera, he flees. No straight man wants to see that.

But a bisexual man, long repressed, does. (Thank god we don't get any GFY fuckery here; Shawn is BI, just in mega denial about it.)

Jude becomes the teacher, Shawn the willing pupil—first ON camera, and then OFF. Shawn realizes that men do it for him, that JUDE does it for him. But he's terrified of coming out, of being with Jude, REALLY being with him.

Jude doesn't want to march back into the closet, and I can't say I blame him. I do think he pushed Shawn a bit too much, and maybe Shawn had that ding-ding-ding moment a little too quickly, but jealousy can be a powerful motivator.

This book CAN be read as a standalone, but I really liked visiting with the other couples (except for Josh and Rupert) again. Jez and Mac are as fun and flirty as ever, and Dev has really come into his own with Ewan as his boyfriend.

- seriously RED-HOT lovin' with mild D/s elements (Shawn loves to be tied down and gets crazy turned on when Jude bosses him around. He's also a blatantly greedy cocksucker. Yeah, you heard me. Shawn BEGS for it.)

- low on the angst, moderate on the sweetness, high on the SMEX (see red-hot lovin' above)

- strong HFN (too soon for a HEA, but it's obvious these guys belong together)

Absolutely recommended for lovers of the series and those who have not yet discovered the joys of housemates getting it on.

In a good book the best is between the lines.