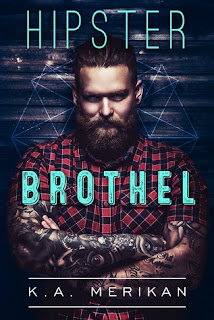 
Mr. B has always been a safe guy for Jo to crush on. He’s the cutest bearded lumber-god to salivate over. Add to that his friendly, outgoing personality, and Mr. B might just be the first guy Jo would be willing to kiss. Fortunately, Mr. B has been in a relationship for years, and Jo is no home-wrecker.

But when Mr. B breaks up with his partner and all of a sudden is single, available, and talks about his plans to be sexually adventurous, Jo isn’t so sure anymore if he has the guts to come out as bisexual.

After a sour breakup, Mr. B wants to show his ex that he’s independent, exciting, and can do very well without him. His best friend Jo is there to the rescue, and they come up with a great new business venture. One thing they lack to start their own line of artisanal boozy jams - money for the investment.

After a drunken brainstorming session, Mr. B finds a way to both gather the cash and show the middle finger to his ex. He will create a one of a kind Hipster Brothel - The Lumbersexual Experience - offering wood chopping lessons, pipe smoking, and a reclaimed wood bed where the magic happens. It’s bound to be a success… if only Mr. B can go through with it, because the mixed signals from Jo are making him wonder if his best friend is as straight as he always seemed.

Thick wool socks, suspenders, plaid shirts, and a beard that occasionally catches crumbs: Mr. B is the modern version of a lumberjack. He does CrossFit and makes boozy jam. He's tall and broad and LOOKS intimidating. But he's the biggest softie inside.

Jo, the hip & cool to Mr. B's cozy, can't help but crush on Mr. B. Jo is (secretly) bi, and being bi (according to Jo, at least) is complicated, so he sticks to girls. But when Mr. B breaks up with his long-term boyfriend, Mr. A, Jo can't resist any longer. In a moment of impulsive bravery, fueled by lust and desperation, he buries his face in Mr. B's crotch.

It's a bold move.

Mr. B doesn't say no. Instead, he hears wedding bells in his head.

But Mr. B still plans on opening a brothel catering to men seeking a lumberjack sexual experience. With Jo's help, he's renovating an old train car, trying to make it nice and inviting. Jo HATES the idea, but B won't be deterred.


Mr. B and Jo have been best friends for years, but Mr. B never suspected Jo was bi—not until the crotch incident. That was a dead giveaway.

Jo digs Mr. B, but he's worried about coming out; he doesn't want the attention. And Mr. B can't do casual.

Right. Cause nothing screams commitment like running a brothel.

Don't let the word "brothel" in the title scare you. This is the sweetest damn book. It's funny and adorable and SEXY.

All the secondary characters are awesome. I was giving B's ex, Mr. A, the side eye for a while, but once I heard his side of the story I could see where he was coming from.

Jo's mom also rocks; the scene where she catches Jo in bed with B is utterly hilarious. She walks in on her "straight" son naked with another man; her biggest concern? How much money Jo spends on shoes.

I admit the name Mr. B is awkward. It got stuck in my head at first, but it grows on you, I promise. It's all Mr. A's fault anyway.

Includes: a wooly sock fetish; sex in the wild; a very special Workout of the Day; and a shout-out to a Polish bakery (because nothing says I love you like rosehip jam donuts).

There comes a time when you have to choose between turning the page and closing the book.