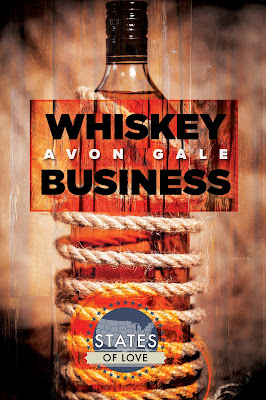 Ryder Waites will do anything to keep the tiny town of Gallows Grove, Kentucky, from vanishing off the map—even sell his family’s whiskey recipe to Bluegrass Bourbon in Lexington. Hopeful that the larger company can provide necessary improvements to the distillery, Ryder aims ultimately to get Gallows Grove on the Bourbon Trail… and bring in much-needed tourism revenue. But to keep producing Hanged Man Bourbon in Gallows Grove, he’ll have to convince company liaison, unbearably stuffy and seriously hot Adam Keller, that he's worth the investment.

Adam comes from an old-money family, but he’s determined to make his own way in the world. When he’s sent to Gallows Grove, he questions the life choices that led him to a rented room in a funeral home in a town full of macabre-themed businesses. And he doesn’t know what to make of Ryder, the descendant of bootleggers who’s on a mission to save his strange town from extinction. When Adam and Ryder put aside their initial mistrust, the results are as smooth as good whiskey. But after Adam’s assignment ends, he’ll have to decide if small-town life and a future with Ryder is to his taste.


States of Love: Stories of romance that span every corner of the United States.

“So, Gallows Grove used to be called something else, which I’m sure isn’t a surprise.” Ryder honked the horn at the driver of a Chevy C10 pickup, a classic, turquoise-blue model that look vaguely 70s-ish that was turning into the lot.
“My uncle,” said Ryder as he pulled onto the main road from the distillery’s gravel lot. “Anyway, the town used to be called Coleman, and they were going to flood it when they dammed up the Little Sandy, so they relocated everyone. Except that was in 1913, and then there was a world war and priorities changed. They didn’t end up damming the Little Sandy until the 1960s, when they made Grayson Lake.”
Adam nodded. That sounded vaguely familiar, and he knew Grayson was fairly close to Gallows Grove.
“So Coleman was basically this abandoned town, and it stayed that way, because it wasn’t even much of a town to begin with. Just a few businesses and houses. The funeral house was the nicest and one of the few still around. And even the people who lived there before didn’t care enough to come back, so it was sort of forgotten. Anyway, when Prohibition hit, some enterprising bootleggers came across it and decided it was the perfect front for running booze. They could pretend it was just another town and the businesses—the drugstore, the post office, whatever—were exactly what they said on the signs.
“Only, in reality, they weren’t anything of the sort. The distillery is out here, kind of hidden from sight, as you noticed, so they’d drive these backroads in the middle of the night and load the booze in the ‘businesses,’ and they’d conduct illicit alcohol sales sometimes in the middle of the day. Because the town didn’t technically exist, no one bothered to check on it. And if any of the revenue men happened by, all they saw was a small, Podunk little Kentucky town with a real popular post office.”
Adam couldn’t help his rueful laugh. “Clever.”
Ryder looked pleased. “Right? Anyway, those are my ancestors. People trying to pull one over on the law while running booze. Well, they say three can keep a secret if two are dead, and that’s morbid but probably true. At some point someone got jealous, and someone else got tipped off, and the revenue men started sniffing around, looking for proof that this town was nothing more than a front for bootleggers. So the only thing to do to throw off suspicion….”
“Was make it an actual town,” Adam answered. And yeah. Okay. He couldn’t help it. That was a pretty charming story, even if he didn’t believe a word of it.
“Right. So the people knew that if they got caught, they’d all swing. There’s this big grove of trees by the park—I’ll show you—and that’s where they figured they’d end up if they didn’t do something, fast. So they got together, wrote up a town charter, and had it signed and everything. Rumor has it one of the bootleggers had an in with the county commissioner or something. Probably he was providing him with booze, but I like to think it was blowjobs.” Ryder gave him a sly smile, and Adam shifted imperceptibly in his seat. “Anyway, they drew up a town charter, had the commissioner sign it, and had it ready for the sting they knew was coming. When the law showed up, they proudly presented the town charter… for Gallows Grove, Kentucky. Legend has it they were all standin’ there, right in the middle of that grove of trees, when the law showed up.”
Adam shook his head. This all sounded completely made up, like something in a television show. “Is any of it true?”

“The basic story? Yeah. It’s true enough, though I don’t really buy the part about everything happening at the last second because the government ain’t usually that quick to act,” Ryder said as he swung the car onto a road that led to the heart of downtown. “If you don’t believe me, we can stop by City Hall, and you can see the charter for yourself. It’s in a frame and everything and supposedly the date is backdated prior to the law showing up, but who knows. Obviously, by the time the law figured out they’d been had, Prohibition was history and the revenue men were hitting the bar like the rest of the town.”

Avon Gale was once the mayor on Foursquare of Jazzercise and Lollicup, which should tell you all you need to know about her as a person. She likes road trips, rock concerts, drinking Kentucky bourbon and yelling at hockey. She’s a displaced southerner living in a liberal midwestern college town, and she never gets tired of people and their stories -- either real or the ones she makes up in her head.