Happy holidays, everyone! I’m the McKay half of Ari McKay, and I’m here to share an exclusive excerpt from our upcoming book, Striking Sparks. It was released on December 15 by Dreamspinner Press. We’d like to thank My Fiction Nook for hosting us on our blog tour, and we hope the readers enjoy this sneak peek of our new book! 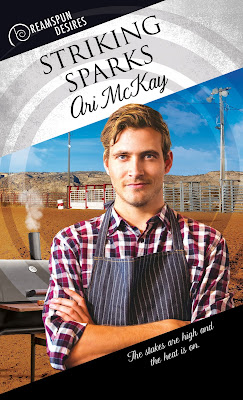 Beau Walker, owner of the Barbecue Shack, needs the help of Jake Parnell, his one-time rival and secret crush, in a televised barbecue competition. Beau is a proud man, but the stakes are high, and smart, sexy Jake is his only hope, even if being around Jake reawakens the attraction he’s fought for years.

Jake left his hometown, determined to build a life somewhere his sexuality wouldn’t hurt his family’s restaurant business—and far away from hunky, obstinate Beau Walker. Then his twin, Josh, is killed, and Jake returns to support his brother’s wife and children. Despite his reservations, he agrees to go head-to-head against Beau on national television. Between stress and grief, as well as pride and determination, only one thing is certain—the heat between Beau and Jake extends well beyond the kitchen.

Something inside of Jake felt trapped, cornered, pushed toward something he didn’t want to face. Since flight wasn’t possible, all that was left was fight, and with a snarl, he lifted his free hand, braced it on Beau’s shoulder, and shoved Beau backward until he was pressed up against the wall. Beau released Jake’s arm and pushed Jake back, making him stumble.
“You wanna do this?” Beau made a beckoning motion with both hands. “Bring it on.”
“Yeah, I do.” Jake wasn’t thinking. All he could do was feel, and what he felt wasn’t good. A part of his mind that was still rational was urging him to stop and walk away, but that small voice was drowned out by the louder part screaming that he’d had enough of Beau Walker and his attitude. Anger and pain and frustration were knotting within him, and he stalked toward Beau, reaching out to shove Beau harder than Beau had pushed him.
Beau stumbled backward, but he didn’t fall, and his expression was one of grim determination as he rebounded and pushed Jake again. “You can do better than that,” he taunted. “I can’t even feel your little taps.”
“Asshole!”
Jake snarled and lowered his shoulder, charging at Beau as he had once done on the football field. He took Beau in the solar plexus, using his weight and momentum to tackle Beau to the ground. Breathing hard, he stared down at Beau, seeing determination and stubbornness rather than anger in Beau’s blue eyes. He could feel Beau’s rock-hard body beneath his, and a feeling of déjà vu swept over him.
“You gonna hit me or what?” Beau’s expression was pure stubborn defiance as he stared up at Jake. “Get it out of your system, Parnell.”
“You’d like that, wouldn’t you?” Jake growled. Part of him did want to slug Beau, but another, traitorous part had other ideas. He remembered the night they’d discovered things about each other that no one else knew, and he remembered how Beau had rejected him when he’d reached out. How Beau claimed he didn’t belong in Buffalo Lick, and how Jake had agreed.
Maybe he didn’t belong, but Buffalo Lick, Lexy, and the kids were all he had left of the brother he’d loved more than anyone else in the world. The brother whose shoes he could never fill. Pain sliced through him, and Jake rolled away, not wanting Beau to see how close he was to breaking down completely.
“Go away, Beau,” he said, his voice ragged. “Go away and leave me the hell alone. You still hate my guts, and I’m sick of you rubbing my nose in it.”
Beau sat up, and when he spoke, his voice was quiet and deep. “I don’t wanna fight you, but I will if it’ll help. Meanwhile, let’s get something straight. I was an angry kid with a bigass chip on my shoulder, and I took a lot of it out on you, but it wasn’t because I hated you. I wanted to fuck you.”
“What?” Jake looked at Beau, unable to believe what he was hearing. He knew he must be gaping like an idiot, but he couldn’t help it. “Are you telling me that you’ve been a total ass to me for years because you were attracted to me?”

“Pretty much, yeah.” Beau leaned back on his hands as he watched Jake somberly. “I was scared of being different, so I got mad instead. Wasn’t nothing we could’ve done about it even if I’d known you’re gay too.”
Jake couldn’t find words. He’d spent most of his teenage years being hung up on Beau, wondering if Beau had sensed his interest and that was the basis of Beau’s apparent loathing of him. After he’d learned Beau was gay too, it had made things worse, because it made Beau’s rejection more personal. Beau’s antipathy had become a given, something Jake had even joked to Josh about. “Nothing is sure but death, taxes, and Beau Walker hating my guts” had become something of a running joke between them, even after Josh and Beau had achieved a truce.
Jake ran one hand over his face. He had to say something, but he had no idea what. He hated feeling off-balance, out of control, lost. Hated that he couldn’t do anything about it. Hated that he was here and Josh wasn’t. Hated being alive when Josh was dead.
He swallowed hard. “Okay,” he murmured. “If that’s all you have to say, then I’m going to head home now.”
“That ain’t all.” Beau’s expression turned stern, and he sat up straight, looking ready to grab Jake if he tried to leave. “Sounds to me like you’ve been so busy trying to be Josh and take care of everybody else’s life that you ain’t taking care of your own. That’s got to change, or you’re gonna burn out.”
Jake wanted to argue, but the words wouldn’t come. He was doing what he had to do, and it was no one’s business, especially not Beau Walker’s, what Jake chose to do with his life and how he chose to deal with the world. That part was his pride. It was a powerful thing, and he went still, conflicting feelings, conflicting needs warring within him. He’d clung to his duty to his family, but his grief was strong as well, crying out at being recognized at last.
He didn’t even realize which part was winning until his vision blurred, and he realized he his breathing sounded like sobs. Aching with loss, he curled in on himself, the black pit of grief pushing away everything else, even shame at Beau Walker seeing him cry. Beau scooted closer and rested one big, warm hand on Jake’s back, rubbing it gently. He was close enough that Jake could feel his presence, solid and reassuring.
Once the tears started, Jake couldn’t stop them. He hadn’t been able to cry for his brother. At first, shock had coated him in icy numbness, and then he’d had to be strong for everyone else, pushing away his pain so he could take care of his family. But now the inescapable fact that Josh was dead hit hard. Josh, who had been the only person who understood him, the one who had been more than Jake’s twin. Josh had been his best friend, his touchstone, his sounding board. Even when they lived a thousand miles apart, Josh had always been there for him, and more than that, Josh understood why Jake needed to leave Buffalo Lick. But now Josh was gone, and Jake felt as though he’d been ripped in half.
He had no idea how much time passed before the agony eased a bit, and the painful knot he’d been carrying around loosened enough to allow him to breathe. He became aware of Beau’s nearness, of the way Beau was doing what he could to offer comfort. Despite his surprise, he felt grateful to Beau, who’d recognized that Jake was close to a dangerous edge and had done what he could to help, but Jake was also embarrassed. Beau might not hate him, but Beau wasn’t Josh, and they weren’t friends.
Drawing in a deep breath, Jake fumbled in the pocket of his khakis and pulled out a handkerchief, and he wiped his eyes and nose. It took a few moments for him to regain enough composure to glance at Beau from beneath his lashes.
“Sorry about that,” he said, his voice thick and raspy. “I’m okay now.”
“No, you ain’t,” Beau replied matter-of-factly. “But you will be one of these days. In the meantime, you got to start takin’ care of yourself as good as you are everybody else.”