On December 1, Harmony Ink Press released my title The Santa Hoax. It's a holiday teen romance with a trans protagonist who is also bisexual. There are a handful of other queer teens in this as well, along with some really great adults and an English teacher that supports Julian as he starts to come out to more people. Julian's struggles and triumphs are set during the holiday season as he and his diverse group of friends start to plan, and then enact, a monster secret Santa exchange and a holiday party on the December solstice.

I've been talking a lot about the teens in the past few posts for this blog tour, so now I want to talk about the adults--like the English teacher Mr. Fisher and Julian's father Damien. I bring up Mr. Fisher the English teacher in particular because, not only does he get to be an inspiring teacher (while also reminding Julian near the end that he, like everyone else, is also human and makes mistakes), he also recommends a lot of really good books to Julian. Most of these have to do with queerness in some way; after a class on Willa Cather, author of My Antonia and O Pioneers, Mr. Fisher tells Julian that Cather used to go around in men's clothing and asked to be called Will. Mr. Fisher supports Julian (whom he has on the class list by his birth name) by calling him J, and then informing him about other queer titles he could read when Julian officially comes out.

Similarly, Julian's dad bonds with him early on in the story over their love of sci-fi stories. Julian's first inclining of difference came from reading stories about robots, where he wondered if he could be just like them--that way he could replace the girl parts for boy parts and move on. The excerpt I've included today is part of that initial scene where he reads sci-fi books with his friend Aiden. As soon as Julian's dad realizes that Julian likes Asimov, among other writers, he starts to shower Julian in a bunch of other choices. As Julian grows up, and distance is put between him and his dad, he clings to books once again to re-establish their relationship and also be more open about his queerness. Stories like The Left Hand of Darkness by Ursula K. Le Guin and The Passion of New Eve by Angela Carter become monumental because of the way in which those authors handled different genders. When Damien starts to read those and like them right alongside Julian, it feels like some form of acceptance.

Since this story is set around Christmas, and I also love sci-fi and speculative fiction, I wanted to give everyone a taste of a few really interesting--and free--holiday spec fic reads. Check out this really comprehensive list from Tor.com for novels that embrace both the cheery and the spooky sci-fi Xmas reads, and check out this amazing short story involving brass canaries if you get the chance. It's one of my favs, though all the stories on this list are quite good. Whether or not you're a fan of sci-fi stories, I hope you enjoy The Santa Hoax if you pick it up. Thank you! 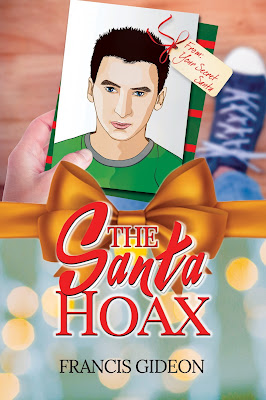 When Julian Gibson realizes he’s transgender, he doesn’t think anything has to change. His parents and friends still call him Julia and think he’s a girl, but so long as Julian can still hang out with his best friend Aiden and read sci-fi novels with his dad, life seems pretty good.

Then high school happens. Aiden ditches him, and a new girl, Maria, keeps cornering him in the girls’ bathroom. A full year after discovering he’s transgender, Julian realizes life changes whether you’re ready for it or not. So Julian makes a deal with himself: if he can tell his secret to three people, it is no longer a hoax. What happens during his slow process of coming out leads Julian down odd pathways of friendship, romance, Christmas shopping, random parties, bad movies, and a realization about why kids still believe in Santa—it’s sometimes better than discovering the truth.


Julian looked at the Asimov book and then back to Doctorow’s novel I, Rowboat. “Can I see that passage again?”
Aiden handed both books over. “I’m still working through Asimov. But I think what Miss Stevens was telling us about irony applies to this too.”
“Oh?”
“Yeah. I mean, I don’t want to get all smart or nothin’,” Aiden said. Julian was sure he was deliberately using bad grammar so he didn’t sound too into it.
Aiden was always so nervous and fidgety when it came to school. He liked to read on his own time, just like Julian, but he was a boy. A “real” boy, Julian often lamented. Reading and being smart became a lot more complicated when you were a boy like Aiden was one. Even if Julian was unsure about who he was, he saw how different Aiden had been treated the past few years at school as things began to change. The two of them had known one another since their parents met at a Gymboree session, and they had grown up alongside one another as neighbors until Aiden’s mom got a divorce and had to move.
“Think about it. If the machines have been conscious all this time, then we’ve been treating them like crap. And they know it,” Aiden said. “So I think that when the machines rise up and go after us, we will start to reconsider our world and how we’ve treated things. How we’ve treated one another.”
“And that’s ironic, how?”
“Because the machines were already there, just waiting. They knew the ending before we did.”
“I guess. But we already use people now. The machines are no different.”
“Hmmm…. Maybe you’re right. You usually are.”
Julian smirked, his cheeks red again. Aiden pawed through his backpack and pulled out his notebook. He seemed to be correcting some of his homework, so Julian looked at the bio in the back of Asimov’s book. He skimmed over some details about where he was born and raised, before he realized that Asimov wrote at least 1,700 words a day.
“Jesus,” Julian said aloud. He pointed to the stat in the book so Aiden could see. “No wonder he has so much in the library.”
Aiden let out a low whistle at the number. “Kind of makes you wonder.”
“About what we’re capable of as humans?”

“Or if he was really a machine!” Aiden corrected with a laugh.
Julian closed the cover of the book and nodded. Maybe Asimov was both. Part machine, part human. Maybe that’s why I like his books so much. Just the idea of robots made Julian feel better. To think of himself as a machine meant he could be fixed. Someone could put in a new engine or gear or whatever else, and he could run again. He could reboot his system, his hard drive, and start the game again with a new avatar.
But as Julian soon realized, most people would try to fix him and make him like the girl body he had. Instead of making Julian into a “real boy,” they would turn him into the woman they thought he should grow up into. Julian didn’t want to be fixed that way. He wanted to be like Aiden, with a boy body and boy life, even if that made reading—among other things—difficult. Being a boy and being a girl were both difficult, especially at that age. But Julian knew he would so much rather deal with the boy worries than the girl ones.
That’s what those sparks were about, Julian told himself. When Aiden and Julian’s hands touched, those sparks were because of their machines. The sparks let them know they were made of the same material, even if Julian often thought he had to be fixed.
“What would you be if you were a machine?” Aiden asked.
Julian coughed, startled by the question. “Um. A hot-air balloon, I guess.”
“That’s not a machine.”
“But it’s what Jules Verne used to get around the world.”
Aiden thought about this. “Well, okay, then. I guess.”
“What about you?” Julian asked, hoping their gears would still be compatible.
Aiden grinned. “I’m pretty sure I’d be that rowboat.”

Francis Gideon is a writer of m/m romance, but he also dabbles in mystery, fantasy, historical, and paranormal fiction. He has appeared in Gay Flash Fiction, Chelsea Station Poetry, and the Martinus Press anthology To Hell With Dante. He lives in Canada with his partner, reads too many comics books, and drinks too much coffee. Feel free to contact him, especially if you want to talk about horror movies, LGBT poetry, or NBC’s Hannibal. Find him at francisgideon.wordpress.com.