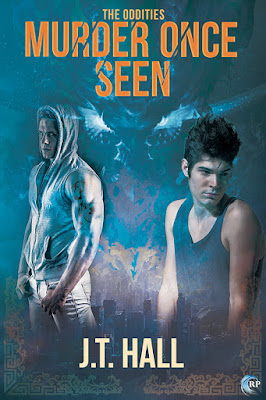 In the city of Nis, things often aren’t what they seem.

Derwin is a bounty hunter gifted with the Oddity of superhuman strength and agility—perfect for hunting down fugitives and demons who roam the streets. One killed his boyfriend two years ago, and Derwin won’t stop until he finds out who. Police suspect it was someone he sent to prison, but he can’t shake the idea that they’re missing something.

Elliot is a rentboy who’s been living on the streets since his parents disowned him. He mistrusts everyone and, given his uncontrolled ability to Read Objects and a client list that includes a major gang boss, despairs of ever having a normal life.

Derwin and Elliot meet in a storm of lust. Derwin’s Oddity is fed by the pain of others, but he only wants what’s freely given. Elliot loves pain, but needs safety and a way off the streets before he can allow it. They may be able to solve each other’s problems . . . if they can survive long enough to work together.

I’ve been plagued by the writing bug since I was little, and just about everything inspires me. I’ll see a movie and think about what could be done with a similar setting but entirely different characters, or perhaps similar characters but in a completely different world. Music inspires me, and I often enjoy either writing or plotting while listening to my favorite playlists. (Green Day is my favorite band.) People talking on the subway inspire me. When I was in college, I even wrote a short story based on a conversation between two gardeners I heard outside my dorm window. History fascinates me, and I often research history or different cultures which can lead to ideas.

As far as the actual writing is concerned, it’s really a matter of putting yourself in the chair in front of the computer and writing. If I can’t get to a computer, a pen and notepad will do. I set daily goals, and until I meet that goal, it’s like I have a little mosquito buzzing in my ear, nagging at me until I go do it. I’m very goal-driven, so that works for me.

I create a loose outline before I begin writing that goes chapter by chapter. Typically I have a good idea of how the first five to ten chapters will go, and then they become vaguer. I’ll write down which plot points I want or need to hit, which conflicts I want to deal with, and a general guideline to get me to the climax and the ending. For example, the original outline for Chapter 3 of my book Murder Once Seen simply said “Intro to Elliot, a dance, a proposal. Information revealed about Derwin’s power and his hunger.”

In the actual writing I may expand on or totally stray from the outline, and write by the seat of my pants. Many times the characters dictate how things go based on their personalities, strengths, and weaknesses. If I start to feel stuck, I’ll delve into the antagonist’s viewpoint and try to think what they could do to make things worse.

That’s a tough question because I like all my characters. Right now I think my favorite character is Elliot Leed, because he’s grown quite a bit from the scared, angry kid on the streets that he started out as. The first Oddities book only shows the early hints of the man that he’s going to become by the end of the series. I like that he’s a survivor. Even though he was thrown out with no education or money, he didn’t curl up and give in, and he didn’t allow himself to be a victim. He held firm in refusing to join gangs, deal drugs, or harm others, and he kept alive a dream that life could eventually be better if he just kept on fighting.


I tend to like all my characters, even the bad ones, for various reasons. However, there are some characters that are uncomfortable to write because they’re bigoted or just plain mean. I don’t like Elliot’s mother, for example, and I didn’t like writing her. I’m currently writing a YA paranormal book where I don’t really like the protagonist’s father, for many of the same reasons. They both have a narrow idea of what their child should be like, and they don’t accept LGBT. I hate judgmental, close-minded people, both in real life and in books, but unfortunately they exist.

Hmm. I’m not really a backwards-looking type of person. I’m usually looking forward, toward the future. Even if there was something I wanted to change, I might instead look at how I could return to the moment and show that while you thought X happened, it was really Y because your perception was skewed somehow. And if I killed off someone I wished I hadn’t? Well, the nice thing about paranormal fiction is that there’s always the possibility of a character returning in some way . . .

It’s never just one book for me; I’m typically working on at least three or more books at the same time, because I’m ADHD and that method works for me, being able to flit in and out of different projects at any given time. Right now I’m heading into the climax of a YA paranormal gay romance between a boy who sees ghosts and a boy who wishes he could see his Fae father. I hope to have that finished in the next few months.

In addition, I’m just starting the third book of the Oddities series, which will be the last book featuring Derwin and Elliot, though there will be an additional three books in the series with another couple. I also plan on writing another short story or two to expand on Tim and Gary’s (The Hard Hat Series) developing relationship. Meanwhile for editing, I’m working on the second Oddities book, coming out mid-2017 and a gay shifter novel dealing with the plight of the Sumatran tiger. So yes, I’m busy!

Thank you for the interview! It was a long, hard road to get to this point, so for readers out there, the main thing is that same quality that I love about Elliot. Never give up on your dreams and your goals. Keep fighting, and keep believing in yourself. You’ll make it.

J.T. Hall has been writing for many years under this name and others, and has appeared in magazines, anthologies, and online books. She earned her BA in creative writing from the University of Arizona, her master’s in education from Argosy University, and works as an independent technical writer for state and federal programs. In her free time, she volunteers for the LGBT community and is active in the leather scene. She has a teenage daughter and a partner of over ten years. They live in sunny Arizona with three adorably cute dogs, three black cats, and a hamster who loves peanuts.

To celebrate the release of Murder Once Seen, one lucky winner will receive a $20 Riptide credit! Leave a comment with your contact info to enter the contest. Entries close at midnight, Eastern time, on December 17, 2016. Contest is NOT restricted to U.S. entries. Thanks for following the tour, and don’t forget to leave your contact info!