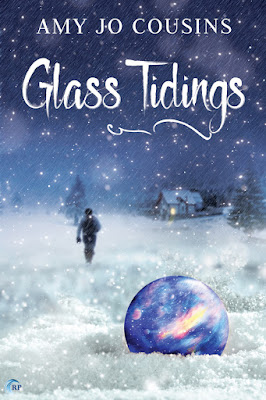 Eddie Rodrigues doesn’t stay in one place long enough to get attached. The only time he broke that rule, things went south fast. Now he’s on the road again, with barely enough cash in his pocket to hop a bus to Texas after his (sort-of-stolen) car breaks down in the middle of nowhere, Midwest, USA. He’s fine. He’ll manage. Until he watches that girl get hit by a car and left to die.

Local shop owner Grayson Croft isn’t in the habit of doing people any favors. But even a recluse can’t avoid everyone in a town as small as Clear Lake. And when the cop who played Juliet to your Romeo in the high school play asks you to put up her key witness for the night, you say yes.

But Eddie Rodrigues never sticks around.

Unless a Christmas shop owner who hates the season can show an orphan what it means to have family for the holidays.

Our Q&A with Amy Jo Cousins:

Everything inspires me. Literally. I usually have a story idea or two every time I set foot out of the house, and almost as many when I do get outside. My brain is in constant “what if” mode. I’m working at the library today and I hopped this cement barrier to get to the front door instead of walking around a construction blockade. As I did, a police cruiser passed me. In my head: “Whoops. Probably not supposed to do that. I could get in trouble. But probably not, because I’m a grown up. If you were younger though, you might get a lecture, which would make you really uptight if you were trying to avoid being noticed by the police. Like if a girl had run away from home? College? A stalker boyfriend? And was heading into the library to get warm because it had been really cold the night before and the friend she was supposed to crash with hadn’t come home, so she’d sat on their doorstep all night. And maybe someone who works at the library notices that she’s been, and tries to talk to her. But her stalker ex shows up at the library and she takes off out a back door to avoid him, while the library guy gets even more worried about her…” But I don’t write suspense, so at least I can put that one off for now! As for what gets me writing? This is my job. I pay the bills with my books, so writing has to happen whether or not I feel like it. But turning off social media definitely helps. Lately, the walk to the library also gives me time to get a scene sketched out in my head, so I’m ready to go once I get there.

Changes from book to book. It used to be straight pantsing. With my first couple of books for Harlequin, I literally didn’t know what I was doing. I’d read Kathryn Falk’s How to Write a Romance and Get It Published about a hundred times in high school and college, telling myself all the while that I was going to write a “serious” literary novel, but I had no real sense of how to plot. These days, I’ll usually do an informal GMC (goal, motivation, conflict) in my head, sometimes writing it down, and sketch out the big plot points while making notes about details of scenes that are already bubbling up from my subconscious. I keep that second doc open when I write, and ideas that come up while I’m writing go in there so I don’t end up with a jumbled mess in my main doc. I’ve also been trying to get better about noting down character & place names/details so I don’t have to search for them later, which is a new thing for me so I’m unreasonably excited about doing it. “Wait, what did that guy’s shower gel smell like? Shoot.” *wastes ten minutes trying to find that scene where it was mentioned* “Aha! Satsuma oranges. Excellent.” I am envious of some people’s super elaborate spreadsheets because they look really cool, but I’m not there yet.


You know I love them all. It’s part of the intimacy of knowing a character so well that you can tell their story. I always end up in love with them by the time I’m done. But yeah, I have an extra special favorite. ☺ Cash, from the Bend or Break books. He’s the most open, loyal, not-defensive guy and I love him for it. Plus, he’s got no verbal filter so anything that goes through his head pretty much shoots right out his mouth a second later. It makes him a really fun character to write, and just about the best friend you could possibly want. I love him.

A couple of days ago, I would probably have said Jack Tarkington from Nothing Like Paris, because I redeemed him in that book, but he was such a bully in Off Campus, I’m not sure I’d actually forgiven him myself. But I ended up rereading NLP over the weekend (something I rarely do after publication) and man, now I really like him. He went through a lot of growth in that book, and turned into the kind of man you can be proud to know. So now I’m not sure who’s my least favorite anymore!

I just did this with the Off Campus audiobook! I made an error using a historical metaphor and nobody caught it either, through all our stages of editing and copy-editing. I was referencing the Christmas truce in the trenches of WWI and I said it was between the Germans and the Americans, which I absolutely know is incorrect! Argh. Such an embarrassing typo for a history buff. So when Cooper North was doing the narration, I emailed him and asked if he could please correct it to say the Germans and the British were the soldiers involved. This is a tiny, inconsequential detail in a very long book, but it had been driving me crazy for two years, so I was quite pleased to get it corrected.

I accidentally upended my whole writing schedule last month when the Cubs won the World Series. I’m a tiny bit of a baseball fan, and I was babbling so much on social media about our Cubbies that my Riptide editor reached out and asked my agent if I wanted to write a baseball romance, standalone or series, for them. I totally meant to say no! I had plans, many plans, for ms. that are near the publication point. But somehow, twenty-four hours later, I had a whole series of stories plotted out, with main characters and secondaries, intersecting timelines, childhood histories and frigging dietary preferences laid out for all these awesome people. So lots of things have been put on hold for this first baseball book, and if that goes well, there’ll be several more stories to follow.

Amy Jo Cousins writes contemporary romance and erotica about smart people finding their own best kind of smexy. She lives in Chicago with her son, where she tweets too much, sometimes runs really far, and waits for the Cubs to win the World Series.

To celebrate the release of Glass Tidings, one lucky winner will receive $20 in Riptide credit! Leave a comment with your contact info to enter the contest. Entries close at midnight, Eastern time, on December 10, 2016. Contest is NOT restricted to U.S. entries. Thanks for following the tour, and don’t forget to leave your contact info!