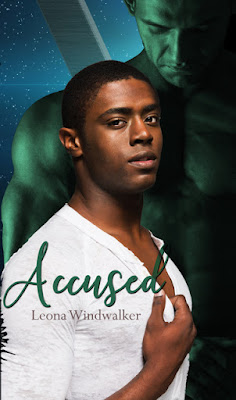 Matthias Reynolds loves his life. He's starting to make it as a graphic artist at last and has a job he really likes at a local café that pays the bills. When a night out clubbing leads to an awkward morning after, he's embarrassed and more than ready to forget all about it. When Talani Enforcers show up at the café, he doesn't know what to make of it all as he's led away in restraints.

Standing accused of crimes he struggles to understand, he finds he has an unexpected champion: the Talani warrior and war hero J'nah Quislin. J'nah knows that Matty is his. All J'nah has to do is keep Matty safe from those who engineered Matty's charges and sentencing. That, and get Matty to accept that universe always intended them to be together as one. All it requires is for Matty to return J'nah's devotion and offer his willing submission. Can Matty do it, with all that it will mean for his future?


Matty recoiled. Leave Earth and work an assigned job on some alien space station or planet until I'm too old to be any use?  Maybe I can beat the rap. No, wait, he said 'admit to being careless'. That means that drunk me being careless where I stuck my dick probably makes me guilty under their rules. Shit, shit, shit. Can't be that bad, right? People volunteer to go and the vids of them show them all enjoying the jobs they were matched to while living in exotic locations.

Licking his lips, he blurted out, “I'll accept the plea bargain.”

R'nar inclined his head, tapped something out on his screen, and then gestured for Matty to come forward and climb the dais He extended his data pad to Matty. “Please press your thumb and forefinger on the screen here and here,” he said, quickly flicking between screens. “The first one accepts the terms of the plea bargain. The second one signs the penal service agreement.” One of Matty's captor's came forward to unlock his hands and Matty did as he was told. Once completed, he was cuffed again and led back out to the hallway where they walked to another elevator.

“Where are we going?” Matty asked.

“Transport level,” the Talani to his left answered. “You'll be transported right away and sent on to processing. They'll match you there with your new job. Be useful and responsible and you'll do fine.”

Just how fast became readily apparent. Upon entering the transport level, Matty was surprised to see just how many people there were. People who had accepted work contracts under the “Volunteer” program were busy processing their transit and lining up to enter various chambers at the end of the room. Matty's jaw dropped as he caught a glimpse through the chambers' glass walls of what was happening.

They have beam technology? Holy shit! I'm going to get Scotty'd up through space?

He was pulled firmly towards a desk. His escort and the Talani seated behind the desk conversed in their language. He desperately wished he understood a word they were saying. The Talani behind the desk tapped a built-in screen on the desk and seemed to find whatever he was looking for. He nodded and then turned his attention to Matty. “You are Matthias F. Reynolds, aged twenty-six?”

“Residence of record is 28 Evergreen Avenue, Apartment B3?”

“Please read through this screen carefully and verify the information is correct by placing your thumb and forefinger against the glass and pressing so that it reads your prints.”

Geeze, how many times do I have to verify it's me and that I accepted this deal? Still, at least he was able to turn it right way around for me with one tap on that screen, he thought as his escort unbound his hands to allow him to follow the instructions, then re-cuffing him.

“Thank you. Your escort will now take you to where you will be transported to the Clearing House.”


“Yes. Those like you who have not signed up for specific jobs go through the Clearing House, where it is ascertained what jobs they are most needed and qualified for. Those who participating in the Volunteer program get placed first while those who have been placed in the Penal Voluntary section of the program will be matched with what's left over.”

His escort once more gently tugged him in the direction they were to go, without speaking a single word to him.

Great, the jobs no one wants or that are too dangerous. Still, I'm a food server, occasional short order cook, and an aspiring graphic artist so it's bound to be something like that, right? I understand that sometimes people end up on military and civilian cargo ships, doing the scut work. Maybe they'll want a cook or something.That'd be okay, not like they are at war or anything. Just patrolling borders and exploring, looking for new trade worlds.

His thoughts came to a halt as they reached one of the glassed in chambers. This one had a much shorter line, with only two other humans waiting their turn while also cuffed and escorted. One was a tall red-headed woman who appeared to be in her to mid to late thirties, immaculately dressed in expensive business attire. The second was an older man, slightly paunchy and balding, wearing a rumpled suit. There was a small podium that had yet another Talani official standing behind it. It appeared that he had been waiting for Matty to arrive, as he scurried from behind the podium, carrying what appeared to be a pen in his right hand. Facing the three humans, he said, “Good. You are the only three I'm expecting today. I am informing you that everything in this chamber is recorded on video and will be added to our databases and your personal files.” Catching the woman's eye, he said, “You are Ella Louise Gimble, convicted of embezzling client funds while working in Accounting. Just a verbal agreement is needed,so please speak clearly.” She replied in the affirmative, her voice betraying only a minor tremor. The Talani official nodded and pressed the pen against her neck. There was a small hiss and she gave a small surprised jerk. Turning to the older man, he said, “And you are Robert  J. Lidgely. You have been sentenced for falsifying data and insider trading while working as assistant to the Senior Commodities Director.”

“Yes, that is correct,” the man replied, swallowing nervously.The official repeated his actions with what Matty now knew was an injector of sorts.

“And you are Matthias F. Reynolds. You have been sentenced for Theft of Sexual favors and Obtaining Sexual Favors by Deceit.”

“Yes, I am Matthias F. Reynolds and those, uh, are what I am being sentenced for.” Matty braced himself, expecting pain from the injector. He was surprised when all he felt was a moment of cold accompanied by a soft hiss.

“You have been injected with nanites which carry copies of the data in your files. If you think to try to run away from your job assignments, you will be found out as they can give your location as well as all the data that is currently in your file, as well as any updated information the Clearing House and your subsequent employer may add. The penalty for being caught is quite severe, ranging from confinement on a penal mining colony to death, depending on the circumstances of your escape and capture.” 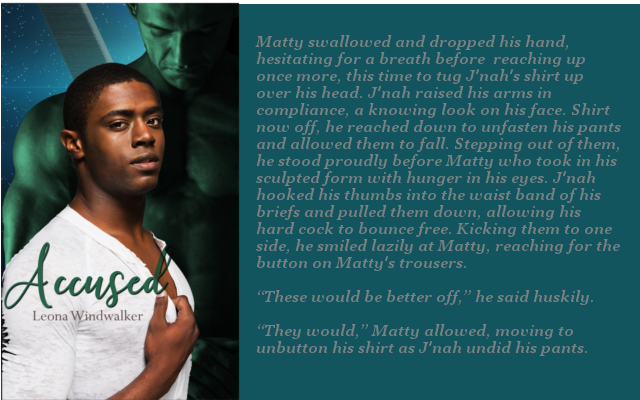 Leona is a longtime staunch supporter of human rights and environmental causes. Her favourite genre to read is M/M fiction and she particularly enjoys science fiction, fantasy, and action/suspense subgenres—especially if they have a nice seasoning of romance. She has far too many books on her Kindle, has overloaded her phone with even more and, when not reading, writing, being driven to distraction by her children, or being overlorded by her three cats, can be found trying to locate the portal that the sock monster uses to steal socks from her dryer.

Recently head-reeling news for her included her novel Jared:Urban Wolves #1 being nominated for an Indie Award from Metamorph and placing as a finalist in the 2016 Rainbow Awards, earning an Honorable Mention. She's still suspicious that it's all been a dream, but as long as her readers are happy and she can find at least one of the missing socks, she's happy.