ARC Review: The Virgin Manny (The Mannies 1) by Amy Lane 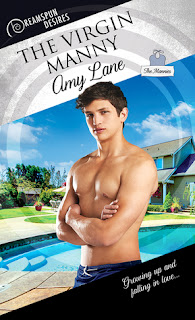 
Sometimes family is a blessing and a curse. When Tino Robbins is roped into helping his sister deliver premade dinners when he should be studying for finals, he’s pretty sure it's the latter! But one delivery might change everything.

Channing Lowell’s charmed life changes when his sister dies and leaves him her seven-year-old son. He’s committed to doing what's best for Sammy… but he’s going to need a lot of help. When Tino lands on his porch, Channing is determined to recruit him to Team Sammy.

Tino plans to make his education count—even if that means avoiding a relationship—but as he falls harder and harder for his boss, he starts to wonder: Does he have to leave his newly forged family behind in order live his promising tomorrow?

One word: ADORABLE. This amount of cuteness should be illegal. When Amy Lane writes feel good stories, she doesn't spare the sweetness.

The premise here is actually kind of sad: Channing's sister passed away recently, leaving him with custody of his 7-year-old nephew Sammy. Channing is a good guy, the BEST guy, but he has a demanding job and needs help yesterday.

Enter Tino, who's most definitely not Box Dinner Girl. That would be his sister. But Tino shows up in time for dinner and basically invites himself over. He wants to hug Sammy and his uncle too.

Channing makes Tino an offer he can't refuse, and Tino, new college graduate, becomes Tino the Manny. This is a temporary arrangement for the summer only, except, as Tino's mom tells him, life is what happens when you're making plans.


Tino's plans include a full-time job and independence; they don't include falling in love. But fall in love he does. Channing gives Tino plenty of space, but the morning kisses turn to caresses turn to Tino being a virgin no longer.

There is a loooong slow burn, and the steam is on the lower end, but I didn't mind. Much.

Tino and Channing are just so good together. And Tino is wonderful to Sammy, who's like a lost puppy, devastated by the loss of his mom. I have a boy Sammy's age, so I found Sammy's grief particularly poignant. Sammy is not a brat; he acts out because he's hurting.

I liked all the secondary characters, especially Tino's friends Artie and Jacob. I could have done without the side story about Jacob and Tino's sister, however. I'm sorry, but getting knocked up at 18 is not something to celebrate.

We can celebrate Channing and Tino instead. The Virgin Manny ends with rainbows and glitter! I'm looking forward to other books in this series.

If the crowns of all the kingdoms of Europe were laid down at my feet in exchange for my books . . . I would spurn them all.