Blogtour: The Trouble With Trevor by Cin Forrester

The Trouble With Trevor

Thank you so much for letting me come to the blog to talk about The Trouble with Trevor. I’m excited about this new pen name and new series. I’m very proud of it, but I needed a new name to separate the K.A. Mitchell brand from Cin.

I’ve brought along an exclusive excerpt for you. Trevor is in really deep trouble here, maybe even more than he wants. 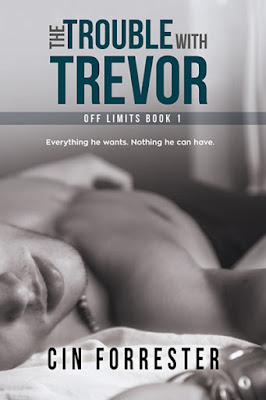 Like most other guys his age, Trevor Nash just wants to escape his small town, go to college and get laid. It’s not his fault his parents are freaked out because his older brother went to college and binge drank himself to death. Trevor’s not going to do that, but they won’t let him go unless he stays with his godfather, Marine vet Grady McKinnon.

Grady’s come to appreciate a quiet life in Boston since an IED tore off his foot and forced his discharge, but he owes his oldest friend a lot. He agrees to the babysitting, provided Trevor sticks to a few basic rules.
It’s been five years since Trevor’s seen Grady, a long time in a teen’s life. Now Trevor is stunned to find out his muscled temporary guardian is a walking wet dream. Trevor has a new plan: get Grady’s attention, no matter how many rules he has to break to do it.

Warning: This book contains a brat, a loner learning to like company, lots of spanking, and some desperate longing.

No text. No call. I can’t very well find out what’s up with Trevor if he’s not here. And it’s twenty-one fifty. Ten minutes to curfew. He can’t be stupid enough to pull the same shit twice in one week, not if he expects to negotiate any more extensions.
But time ticks on while I wait for the local news—and Trevor. With how he was acting last night, I’m actually worried. If he’s just pushing boundaries again, I swear I’m going to lay into him so hard his grandkids won’t be able to sit comfortably.
The rerun of a sitcom can’t hold my attention, and I stand. Through a gap in the curtains, I catch a glimpse of light on the street where no light should be.
A quick sidestep to the window shows the light’s from the screen of a cell phone. A cell phone held in the hand of one soon-to-be-damned-sorry brat.
What the hell is he doing?
I stay hidden at the side, but I can see him just fine through that space in the curtains, standing in front of the house next door. He pokes around on the phone, glances up toward my door, then goes back to poking.
The little shit. He’s deliberately provoking this. Oh, son, you have no idea how much trouble you just bought yourself. At exactly eleven minutes past, his key turns in the lock. I’ve moved into the hall, hugging a shadow from the dark kitchen while I wonder how far he wants to take this.
He hangs up his coat, but his boots get dropped casually on different sides of the hall. He’s holding his backpack in front of his waist by the top loop when I move.
He jumps, guilt and surprise all over his face. “You—uh—I didn’t see you.”
I wait, watching. His body language is nervous, shoulders hunched, teeth pulling his lower lip in, fingers twisting in the nylon loop. But his eyes stare straight back into mine. Bold. Challenging me.
Smart-assed brat, you are writing a check your ass ain’t gonna want to cash. I already picture him facedown over my lap, legs kicking as I bring that paddle down on his ass until he’s begging.
I fold my arms and see how he wants to play this out. “Just get in?”
“Yeah.”
“What time is it?” Like we both don’t already know the answer.
“Around ten.” He shrugs.
Okay then, here we go. I’m on him in two steps, making sure to land on my real foot so I can pivot as I clamp my hand on the back of his neck. Damn, his hair is so long, soft under my grip. I drag his head down so my watch is in his face. “What time does that say?”
He doesn’t struggle, but his muscles are rigid. He mumbles something.
“What?” I loosen my grip a fraction.
“Ten o’clock.”
I squeeze and give him a little shake. “Try again.”
“Ten thirteen.” There’s a sigh of surrender in his voice. “But I’ve already been inside for—”
“Two minutes.” I let him go.
His eyes watch me close.
“You gotta reason for being late?”
“I didn’t think ten minutes really mattered that much.” Something about the flat way he says it reminds me of the way he’d been last night, waiting for me to say the right thing.
Looking after him for Frank meant more than just feeding him and making sure he didn’t drink himself to death. “Trevor, is something going on?”
When he doesn’t answer, I push, “School? Friends?”

I stretch a hand toward his shoulder. He doesn’t flinch or pull away, but he’s not meeting my eyes.
“Your nightmares?” I try.
“No.” He ducks away. “Jesus Christ.”
There’s enough of a pause for the last to be more deliberate baiting. You caught yourself a damned big fish, brat. “Watch your mouth.”
There’s no apology. Not that I expected one. I don’t know what the hell he wants with this shit, but I know damned well what he’s going to get. “You were late. You know the consequences. Go upstairs and get ready. Don’t forget about the paddle.”
He swings his backpack over one shoulder and makes for the stairs, then turns back. “Wait. You said I had a choice.”
“You had a choice to be home on time.”
He blinks and sucks on his lip before saying, “I mean about taking a spanking.”
Oh. I’d never wanted to spank him in the first place, so why am I disappointed now? I think of something substantial enough for all this defiance. The kid loved his sleep. “Okay. Forget about sleeping past five a.m. for the next week. I’ve got lots of chores you can be doing.”
“A whole week? For ten f—for ten minutes.”
“It’s a repeat offense. You should probably get to bed now. Don’t count on any free time this weekend either.”
“Okay, okay, I’ll take a spanking.” Again with the heavy, defeated sigh.
“Trevor.” I say it sharp, and he looks up. “Your butt is going to be damned sore, probably for days. Last chance for you to change your mind.”
I was really hoping he wouldn’t, just like I was looking forward to making him sorry about that. I couldn’t explain it to myself. I knew I didn’t want to beat him up or punch him, but making his ass sore enough that he was thinking twice about his attitude every time he sat down was going to be damned satisfying.
I had to fight a smile when he said with a huff, “I’ve got other stuff I want to do this weekend,” and turned to climb the stairs.
“Might want to take a piss. You’re gonna be occupied for a while.”