Blogtour: The Playmaker by Andrew Grey


Sometimes a story writes itself and other times they are a two steps forward, one step back kind of process.  Thankfully The Playmaker was the former.  This story flowed like water.  As a writer you wish for those kind of stories, you really do.  That’s not to say that writing any story is easy.  Each one takes something personal.  As a kid I wasn’t able to play sports like the other kids.  I broke my arm twice and had to have corrective surgery on it all by the time I was eleven, so the rough and tumble of most sporting activities was missing for me.  As a consequence I developed separate interests.  So needless to say, there’s a lot of Monty in me.  But that doesn’t mean I don’t appreciate the beauty and grace of an athletics.  It just means that I’ve always had to do it form the sidelines.  So in a way The Playmaker is another way that I’ve been able to enjoy the hard impact of sports from a safe distance. 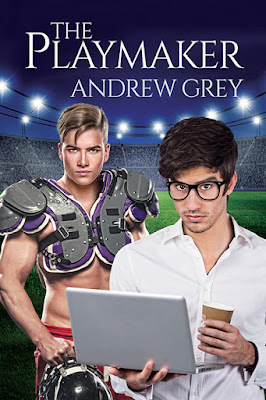 Professional football player Hunter Davis is learning that saying he’s gay is very different from actively being in a relationship with another man—especially in the eyes of his teammates and fans. So when Hunter needs a personal assistant to keep him organized, he asks for a woman to prevent tongues from wagging. Montgomery Willis badly needs to find work before he loses everything. There’s just one position at the agency where he applies, but the problem is, he’s not a woman. And he knows nothing about football. Still, Hunter gives him a chance, but only because Monty’s desperate.

Monty soon proves his worth by saving Hunter’s bacon on an important promotional shoot, and Hunter realizes he might have someone special working for him—in more ways than one. Monty’s feelings come to the surface during an outing in the park when Hunter decides to teach Monty a bit about the game, and pictures surface of them in some questionable positions. Hunter is reminded that knowing he’s gay and seeing evidence in the papers is very different for the other players, and he might have to choose between two loves: football and Monty.


“So you’d change me,” Hunter said.
“No. I’m saying I’d work with you to bring out your style.”
“Okay.” Hunter clearly wasn’t buying it. “Do you cook?”
“Yeah.”
“What kind of food?” Hunter demanded.
“What do you like? I made fettuccine carbonara last night for dinner, I make killer pork chops, and I’ve been told my chicken wings are to die for. But I bake them so they don’t have all the fat. I make a mean cheesecake and cupcakes too.”
“What about vegan?”
“Are you vegan?” He somehow doubted it, as big as Hunter was.
“God, no.”
“Then why ask? I’ll cook all the meat your football heart desires if you’ll give me a chance.” He thought he might have earned a few points.
“What about cleaning?”

“I’m not a maid. I’m your assistant. If you want me to find you a cleaning service, I can certainly do that.”
“Okay. That’s great, but you don’t know football. Do you have any idea when preseason starts?” Monty shook his head. “Practice schedules? Do you have any idea about the demands on my time once practice starts? How about conditioning. Do you run?”
“Yeah. That I can do. Where do you need me to go for you?” Monty realized he’d misunderstood as soon as he saw the sneer.
“I mean run as in exercise.”
“Oh. I used to run in school,” Monty answered. “Look, I may not be the kind of person you’re looking for, but I’ll do my very best for you if you’ll give me a chance.” He was still trying to figure out what Hunter was looking for.
Hunter sighed. “Fine, I’ll give you a chance. I need you to put together my schedule for me. You can call Helen to get the things from my agent. You’ll also need to contact my publicist as well as the coach’s office and the team office. I also have a bunch of laundry upstairs that will need to be taken care of, and I have a team meeting sometime this week. Oh, and I have a lunch this afternoon, but I can’t remember what time or with who. It’s just some vague memory. So find out for me. I need a cleaning service, so get on that, and I’ll need someone to open the pool and clean the hot tub. It’s smelling funky.”


Monty had grabbed a notebook in his bag and scribbled things down as Hunter had rattled them off.