Author Of The Month - A.M. Arthur - Week One

Welcome to our first week of celebrating the amazing

In our first post, we'll talk about the Cost Of Repairs series, and the Offbeat series, plus a list of the author's favorite things. All the way at the bottom is a chance to win one of her books too!

First up, Cost Of Repairs: 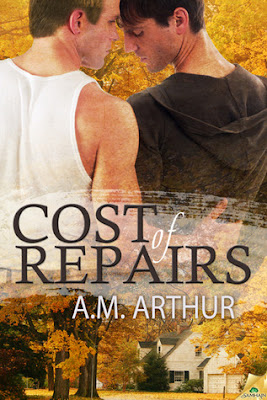 "Fixing the home can heal the heart if you can find all the pieces. "

Police officer Samuel Briggs is getting to know the people on his new, third-shift beat, but he'd prefer they not know too much about him or the painful past that drove him away from New Mexico to start fresh in small-town Stratton, PA.

All he wants is peace, a manageable routine, and time to fix up his project home. There's no room in his broken heart for a new relationship. It's crowded with too many memories. But there's something about the Dixie's Cup short-order cook, who's flirty one minute, distracted the next, that piques Sam's interest.

Part-time cook, part-time hardware salesman and full-time handyman Rey King lives to work but not because he loves it. Relationships? No time. Until one glance at Sam's haunted eyes sends a plumb line straight to his wary heart.

One afternoon of impulsive, no-strings sex begins to grow into a cautious friendship. But when Rey is seriously injured protecting a friend, the cracks in their already shaky foundation begin to show. Falling in love wasn't in either man's recovery plan and this time, the risk could be too great.

Warning: Contains one emotionally wrecked cop, one angsty short-order cook, a few too many secrets, some meddling small-town folk, and plenty of hot man-on-man action.


Samuel collected the bags of sliced meat and cheese from the fridge, as well as a jar of mayo and bottle of mustard. The loaf of rye was already on the table next to a pair of paper plates and plastic utensils. Rey joined him at the kitchen table but didn’t sit down.
“Everything’s still in storage?” he asked, poking at a paper plate.
“Yeah.” Samuel plucked a bag of barbecue potato chips out of the cardboard box that held most of his non-perishables. “It’s why I’m trying to finish the kitchen first. Seems like the most important room to get fully functional.”
“Not the bedroom?”
He nearly dropped the bag of chips. Rey’s deadpan delivery of the question left no clues as to how he’d meant it. Serious? Flirtatious joke? Samuel hadn’t openly flirted in years and he felt a bit out to sea. Especially around Rey, who made him want to jump out of his own skin. He was so flustered he let himself say, “It’s the least used room in the house, so it can wait.”
“Shame.” The teasing light in his eyes was back, even though he didn’t smile. He put his coffee mug down next to the roast beef. “You know, I’m really not that hungry.”
Samuel swallowed. “You’re not?” Somehow he’d lost control of the situation. The script had changed and he didn’t know his lines. Hell, he wasn’t even sure about the scene.
“And you still haven’t shown me your rear deck.”
His heart pounded harder at the keen interest in Rey’s expression—his wide eyes and parted lips. Rey drew his tongue across his lower lip, and Samuel’s dick took a sudden interest.
“It’s, uh, this way,” Samuel said. He scooted around Rey and walked to the back kitchen door that needed a new coat of paint and a screen not covered with patches. He unlocked and opened the storm door to give them a better view of the rear deck.
Rey stepped to his side, close enough that Samuel could feel his warmth. Rey smelled like Ivory soap and sweat, not a hint of cologne or strong shampoo. He liked the clean, natural scent. He also had enough control of his faculties to not give in to the urge to lean over and inhale more deeply. He stared at the ancient oak tree standing sentinel in the middle of the yard to keep from staring at Rey.
The object of his inattention leaned slightly forward, gazing through the ripped screen door. “You’re right again, Samuel,” he said. “An amazing rear deck. The owner’s isn’t too bad, either.”
“Uh…” It wasn’t the most intelligent thing to tumble out of his mouth, but Samuel couldn’t quite manage higher thought. Rey was definitely flirting and bordering on an overture of intent. He’d invited Rey over with the hope of making a friend, maybe even getting his full name. Nothing else.

Also in the series: 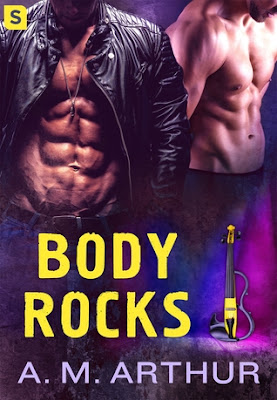 Everything is finally falling into place for Trey Cooper: his band has been accepted into one of the biggest music competitions in the country…too bad their drummer just quit to play with XYZ, their biggest rival. When Trey has a mind-blowingly hot hookup with a mysterious violinist, Trey definitely plans to see him again – just not on stage as a member XYZ.

Dominic Bounds’ time to make his musical dreams come true is running out. If something doesn’t happen fast, he has to head home to find a real job. This competition is his last chance, and Dom needs to come out on top – but he never expected to fall for his rival. As Dom and Trey risk everything to begin a secret affair, there’s no denying their chemistry is off the charts – but could their band rivalry turn their romance into a one-hit wonder?

“So you play bass and keyboard, and you have an amazing voice,” Dom said. “Anything else I don’t know about?”
“I have a pretty cute ass, too.”
The flirty remark made Dom’s dick twitch with interest. “Is that your personal opinion, or is this coming from a secondary source?”
“Both.” Coop’s lazy smile, combined with his very open appraisal of Dom’s body, kind of made Dom want to skip the go-karts and find a private place so he could nail Coop’s cute ass. “You want to find out for yourself?”
“Oh, I am definitely finding out for myself.”
Coop’s gentle laughter sent excited shivers down Dom’s spine.
The go-kart track was on the west side of town, tucked in behind a bunch of chain stores. Bright lights all around the perimeter and in various places inside of the fenced-in area made it practically daylight. Half a dozen karts were racing around the far side of the track. The humid air had lost the scent of the ocean, replaced by burnt rubber and gasoline.
Coop took the lead, man-hugging a guy their age that he introduced as Gray. Gray set them both up with helmets and karts, then showed Dom how to run the thing. Seemed simple enough. He got it going and followed Coop out onto the main track. It seemed pretty crashproof, with bumpers on both the kart and the edges of the track. Wide enough for three karts at a time.
“Ready, set, go!” Coop said, then hit the gas.
He shot off. Dom jammed his own gas. The kart surprised him with the power of the initial lurch, and he belted out a sound that was half fear and half laughter. Once he figured out how to apply pressure, he started to enjoy himself. Coop slowed down so Dom could catch up, and they began a high-speed dance around each other. Dom would lead, then Coop would take over. Every time he caught a glimpse of Coop’s face, Coop was grinning like a fool.
Dom was having a blast, too. They were probably supposed to have a time limit, but they raced around the track for what felt like hours. Dom lost himself in the chase, until Coop signaled that they should pull over. Coop’s eyes were bright, his cheeks flushed, and Dom had never seen someone so completely alive from something as simple as go-kart racing.
Dom pulled off his helmet, grateful to get the heavy thing off and some air on his face.
“So what did you think?” Coop asked. He bounced on his feet like an excited puppy.
“It’s killer, man, I loved it.”
“Sad you waited so long to try it?”

“Nah. Then you wouldn’t have been able to pop my cherry.”
Coop’s eyes widened briefly, then he laughed. “Happy to help.”
On their way back to the car, Dom asked, “Anything else you want to do?”
Coop leered at him. “Anything you want to do?”
Blood started going south, and Dom was glad they’d reached the car, because he didn’t want to be walking through a parking lot with a boner. “Dude, your ass better be ready to cash the check your mouth is writing.” 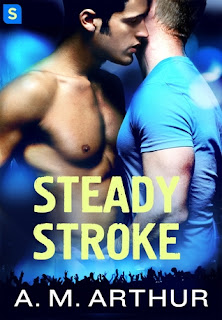 No stranger to the writing world, A.M. Arthur has been creating stories in her head since she was a child and scribbling them down nearly as long. She credits an early fascination with male friendships and "bromance" (and "The Young Riders") with her later discovery of and subsequent affair with m/m romance stories. When not writing, she can be found in her kitchen, pretending she's an amateur chef and trying to not poison herself or others with her cuisine experiments. You can contact her at AM_Arthur(at)yahoo(dot)com.


Thanks for celebrating with us this week. Come back next Thursday for more of A.M. Arthur's books, five little-known facts, plus another chance to win.