Audiobook ARC Review: Fish Out of Water by Amy Lane 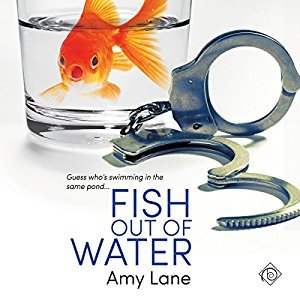 Defense attorney Ellery Cramer grew up with the proverbial silver spoon in his mouth, but that hasn’t stopped him from crushing on street-smart, swaggering Jackson Rivers for the past six years. But when Jackson asks for his help defending Kaden Cameron, Ellery is out of his depth—and not just with guarded, prickly Jackson. Kaden wasn’t just framed, he was framed by crooked cops, and the conspiracy goes higher than Ellery dares reach—and deep into Jackson’s troubled past.

Both men are soon enmeshed in the mystery of who killed the cop in the minimart, and engaged in a race against time to clear Kaden’s name. But when the mystery is solved and the bullets stop flying, they’ll have to deal with their personal complications… and an attraction that’s spiraled out of control.

When listening to the audio book is as good as...

the first time you read the book it's worth at least a 1/2 star in my opinion. I read this book back in July of this year so not quite 4 months ago and  it got happily got 4.5 stars at that time and I have to say usually even if I do a re-read it's a year or 2 between readings, but I really, really liked this story so when I was given the chance to listen to the audio book, I thought why not. It's narrated by Greg Tremblay who my friend Heather will tell you is fantastic! Well Heather, I think I might be inclined to agree with you because I enjoyed this so much that I could have happily started listening to it again as soon as I was done...or at least I would have if I didn't have 3 more audio books waiting for me and a whole stack of other 'oh-my-god-I-need-to-read-this-now-books'.

I'm going to start this with my review of the book and since that hasn't changed and I stand by my original review of not quite 4 months ago, we're just going to add a link here...
Amy Lane Does Mystery
why rehash what's already been said, right?

Needless to say Greg Tremblay has another fan. I was more than a little impressed with the narration of this book. His voice was engaging and effortless to listen to. The voices that he gave to the characters worked for me and while they may not have been the exact voice that my brain conjured up the first time I read this story neither did they conflict with my concept of the character and they were consistent which is to say that Jackson sounded like Jackson from start to finish and at no time did I confuse characters because voices suddenly changed. Overall it felt like I was getting the chance to see or I guess I should say hear this story from a different perspective.

One of the things that I found I really liked about Greg Tremblay and the narrator from my previous audio book is their ability to maintain consistency in the voices. Simply put Jackson and Ellery sounded the same at the end of this book as they did in the beginning and this is something that I have to admit, I like many others I'm sure, have come to realize that this is an integral part to producing a quality audio book.

An Audible copy of this book was provided by the publisher in exchange for an honest review.