Audiobook ARC Review: Commitment Ranch by B. A. Tortuga 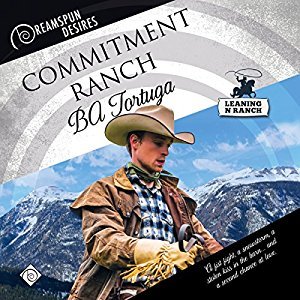 Maybe I should have just read the book...

I have to admit for me the book was probably a 4 star read but the audio version just didn't quite work as well this time around.

Ok so what I liked about the story. It was a second chance story and I'm pretty much a sucker for them. It was B.A. Tortuga and I like her stories. Her characters are real and down to earth and often times damaged and have an inner strength that just refuses to quit. I liked Ford...probably a little bit more than Stoney which was unusual for me because normally Stoney would be the one I'd be rooting for, but for most of the book I just felt like Stoney was being a idiot.

Years earlier in college Stoney and Ford were a couple. They went back to Ford's home on the Leaning N for spring break and for reasons that neither of them truly understood fully, Ford returned to school and Stoney stayed at the Leaning N. The next thing that Ford knew Stoney apparently had a son with his cousin Brit who died shortly afterwards in a river accident. Now Ford's Uncle Ty is calling him out of the blue and telling him to come home and Ford does. He's a successful lawyer with a law practice that he loves but Uncle Ty's family and if he needs him, Ford will go. I have to admit right about now is where I'd love to go into why I was less enamored with Stoney but I truthfully can't do that without giving out pertinent plot details so I'm just going to move on to other things at this time.

There were several secondary characters but the one that I really liked was Geoff the cook. He was a character with the potential for a really good story of his own. Then there was Andy the interior decorator this character was so stereo-typed it might have made me roll my eyes a time or two...seriously flamingly gay, effeminate interior decorator...I kid you not..but still he was just enough over the top to pique my interest and make me feel like more of him could be fun.

The last two characters that I want to touch on are Uncle Ty...shame, just shame on you because truthfully you were a big contributor to the problems between Ford and Stoney and I have yet to see or understand why it was necessary. So no in a nutshell I did not like Uncle Ty. He wasn't a bad man but I feel like he owed explanations that he didn't seem to have or want to give...so he stays on my sh!t list.

Last of all is Quartz? Really? You named the kid after a rock? No, sorry I just don't get stuff like this and that's all I'm saying about that because more importantly and I think this goes more to the audio portion of the book. Quartz irritated the hell out of me. I did not like this kid...specifically I didn't like his voice.

Don't get me wrong. I like John Solo and I stand by that. I like the voices he used for Stoney, Ford, Uncle Ty, Miranda, Andy and even Geoff (although between you and me, I'm pretty sure Geoff was stoned for most of the story...just sayin') and the fact that he can keep the voices straight and Stoney never sounds like Uncle Ty who never sounded like Miranda just impresses the hell out of me. Even minor characters who maybe only have a line or two in the whole book don't sound like anyone else. But I just could not warm up to Quartz and it was very much due to the voice. I found his voice to be whiny and I'm sorry, whiny voices grate on my nerves.

I also have to admit this is the second book that I've read with a kid in it that I ended up not being enamored of and I love kids...I really do, guys, I'm really thinking I might be broken here. I either have to find me a book kid to love or avoid them at all cost for awhile, I'm just not sure which.

An Audio ARC of "Commitment Ranch" was graciously provided by the publisher in exchange for an honest review.