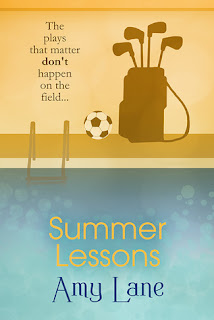 
Mason Hayes’s love life has a long history of losers who don’t see that Mason’s heart is as deep and tender as his mouth is awkward. He wants kindness, he wants love—and he wants someone who thinks sex is as fantastic as he does. When Terry Jefferson first asks him out, Mason thinks it’s a fluke: Mason is too old, too boring, and too blurty to interest someone as young and hot as his friend’s soccer teammate.

The truth is much more painful: Mason and Terry are perfectly compatible, and they totally get each other, but Terry is still living with his toxic, suffocating parent and Mason doesn’t want to be a sugar daddy. Watching Terry struggle to find himself is a long lesson in patience, but Mason needs to trust that the end result will be worth it, because finally, he’s found a man worth sharing his heart with.

I loved Winter Ball, the first book in this series, and was excited to read Mason's story. Mason is one of the VPs at the company where Skip works. In book 1, Mason crossed some boundaries in pursuing Skip, but once he met Richie and realized that Richie was IT for Skip, he backed off.

Mason has a huge heart; he's smart and loves to take care of his people. But he's also socially awkward and has a tendency to blurt out whatever pops in his head. Mason doesn't think he's much of a catch, until he sees that he's been surrounding himself with the wrong tribe. I really loved Mason, spazzy mouth and all.

The other MC, Terry Jefferson, was harder to like. Terry is youngish (25 to Mason's 37) and has lived with his mother his entire life. Terry's mother is a piece of work: homophobic, hateful, unhappy; she's just a nasty, ugly human being. But she's Terry's MOTHER, and he can't leave her, not yet.

There is definite chemistry between Mason and Terry, and their coupling is raw and intense. Mason loves sex, and he finally meets his match in Terry, who is totally uninhibited and wanton.


Terry teaches Mason how to play soccer, and Mason teaches Terry golf (which doesn't go as well). I liked seeing Richie and Skip again. The banter between the guys on the soccer team is hilarious! Carpenter is back as well, trying to lose weight and hanging out with Mason's younger brother, Dane, who broke my fucking heart.

Dane is bipolar and sometimes he just stops taking his meds and falls into a deep, black hole of depression. Mason worries about his brother incessantly, and the friendship between them is a beautiful thing. Dane and Mason's parents are AMAZING, a true foil to Terry's selfish, emotionally abusive mom.

My biggest issues with the story was how Terry treated Mason. Mason falls head over heels for Terry, but Terry is flighty. His heart is in the right place, and he cares about Mason, but he's a squirrel, always flitting around. Even after dating Mason for months, after all the help Mason gives him, Terry can't promise Mason anything. He won't even say they're boyfriends.

I get why Terry would need to grow up and find himself once he moved out of his mother's house. After all, he's never been his own person. But the way he sort of forgets about Mason and starts dating other men made me really grumpy.

Plus, there wasn't enough groveling! Terry doesn't do enough to prove himself, and Mason gives in too easily. I really wanted Mason to make Terry beg for it, but Mason's just not a bitch like that. And Terry does promise; he finally does.

Summer Lessons is classic Amy Lane: sweet with a touch of angst, sharp dialogue, complex characters, lusty sex, and a HEA (but of course).