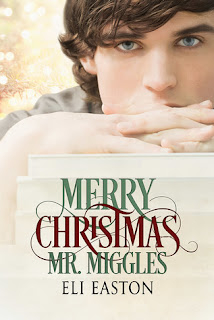 
Toby Kincaid loves being the junior librarian in his hometown of Sandy Lake, Ohio. He spends his days surrounded by books and chatting with the library patrons. He especially adores the head librarian, Mr. Miggles, who is kind, witty, knowlegable about everything, and hopelessly addicted to Christmas. Sean Miggles is also pretty cute—especially for an older guy who wears ties and suit pants every day.

But Sean keeps himself at a distance, and there’s a sadness about him that Toby can’t figure out. When Sean is accused of a crime he didn’t commit, he gives up without a fight. Toby realizes that he alone can save the library—and their head librarian.

Toby will need to uncover the darkness in Sean’s past and prove to him that he deserves a second chance at life and at love too. And while Christmas miracles are being handed out, maybe Toby will get his own dearest wish—to love and be loved by Mr. Miggles.

I beta read this book, but my rating has naught to do with that. I was enamored with Mr. Miggles (the book AND the character) from the get go.

Sean Miggles, town librarian, is a man entirely dedicated to his job. He loves books. And he loves to share books with others. He's a quiet, unassuming, kind-hearted man who dresses like a professor and keeps to himself.

Toby, laidback and loyal, is Mr. Miggles' assistant, his one and only employee. Mr. Miggles is just a few years older than Toby but so reserved, he seems much older. Toby adores his boss, but he can't imagine Mr. Miggles anywhere but the library.

Unfortunately, Toby's dating Justin, a selfish dude who takes advantage of Toby's giving nature and borrows money he never pays back. Mr. Miggles is not a fan of Justin. I wasn't either.

Mr. Miggles loves Christmas and starts decorating early (he's especially fond of tinsel). He has a dry sense of humor, and the banter between him and Toby is hilarious.

I liked how Toby’s thoughts about Mr. Miggles slowly progress from “Oh, he’s my old boss who’s kind of weird and awkward” to “He’s not that old, and he has a nice ass.”


The sexual tension under the surface, the way Sean initially rejects Toby’s flirtations, made me that much more invested in these MCs getting together.

Even though Toby narrates the story, I felt like I got to know Sean well by seeing him through Toby’s eyes. Granted, Toby isn't always the most reliable narrator (the way he chooses not to see what a douche Justin is, for example), but he's smart and self-aware, and his narrative voice rings true.

The secondary characters really stood out for me; I liked that each of the regular library patrons had a story.

When Sean attempts to help a little girl often abandoned for hours on end at the library by her abusive mother and the mother's fuckwat boyfriend, the unthinkable happens. Toby is protective of Sean, and he rallies the community to stand up for their Mr. Miggles, who becomes withdrawn and resigned.

This is such a sweet, romantic story. While there is some angst and sadness (Sean's backstory will break you a little), love totally wins. You'll cheer for Mr. Miggles, for his courageous heart, and for Toby, who works so hard to be the man Sean needs.

Includes: literary references that made me geek the fuck out, inspirational speeches (grab a tissue or two . . . or three), music (Because. It's Christmas.), best family ever (supportive families rock!), and sex in a library (you're welcome).

Whenever you read a good book, somewhere in the world a door opens to allow in more light.