Today we shine the spotlight on Jackie Nacht and 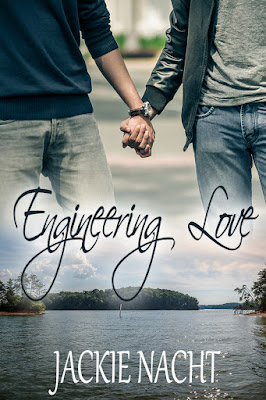 
Adrian is a student from a northern college transferring to Georgia Tech. Used to seeing snowmobiles outnumbering the cars on campus, Adrian finds himself living in a state hotter than hell and feeling completely lost in the heart of Atlanta. A chance encounter introduces him to Davis who Adrian knows is trouble, but can’t help falling for.

Davis is the picture of big man on campus and oozes with confidence, at least until he meets Adrian. Something about Adrian has Davis’s usual charm flying out of the window and everything goes from smooth to hell as Davis tries to make Adrian his own.

Between awkward dates, second-degree burns, study sessions, and snow, the two stumble their way into a relationship neither had planned. Will Davis give up the bachelor life to take a chance at a relationship with Adrian, or will he walk away from something special just to stick to his original plan?


Ten minutes until kickoff and it was like every person in the student body had showed up. Adrian was squished next to Mark and a girl wearing glitter tattoos on her cheeks. She and her friend were taking selfies, and somehow, Adrian got tugged into one.
“What’s your name?” the girl hollered.
He leaned in, yelling, “Adrian.”
“Mara.” She smiled over at him.
“Mara!” a guy called from behind them, then he landed on Adrian’s back.
“Careful, Davis!” Mara yelled.
Bending over from the weight of the guy, Adrian would have face-planted into the person in front of him if it hadn’t been for Mark grabbing his shirt. The fucking game hadn’t started, and he was about to be on the injury list. And Adrian wasn’t even playing in the game!
“Whoa, whoa, whoa.” The guy on his back grabbed him and wrapped an arm around Adrian’s chest.
The person in front of him turned with a scowl on his face before he smirked at the man behind him and raised his hand. “Davis!”
Hands clapped over his head, and the damn bull in the china shop behind him still had his arm around Adrian.
The two chatted above him, and Adrian glanced over at Mark who was rolling his eyes. “That’s Davis.”
Oh yeah, because that explained everything. It’s Davis so it’s natural to start chatting it up with Adrian snuggled right in. Boundaries, people, boundaries. Apparently, tackle-boy Davis seemed to know everyone since people all around shouted his name. Adrian felt Davis’s deep chuckle and wondered why the hell he was still being held by him.


Adrian turned and glanced over his shoulder, then kind of wished he hadn’t. Davis was laughing while talking to the guy Adrian almost fell into before. Davis was hot… like hotter than Atlanta. Black hair and a five o’clock shadow around a strong jaw. Built enough to belong on the football field and damn, and he had light ice-blue eyes. Adrian had an urge to reach out and touch Davis’s face to make sure he was fucking real. The only thing that detracted from the model-perfect looks was a small scar on his bottom lip, which Adrian thought was sexy as hell. The white line bisected plump full lips, which made Adrian want to kiss it. And he shouldn’t be thinking that.
With a small twist of his arm, Adrian was free of Davis. He glanced back at him.
“Don’t trample the newb, Davis,” Luke hollered from down the row.


Davis’s blue eyes glinted in the noonday sun, and a crooked smile appeared on his face. Adrian felt like prey in the presence of a predator, trapped by a sea of fifty-five thousand people.

These are a few of my favorite things. :D Now read that without singing it LOL

Thank You My Fiction Nook for having me on here today sharing a few of my favourite things. deep breath Okay here it goes…

Favorite Food: Chipotle burrito bowl. I could have that every day. ;)
Drink: Well, since it’s fall my favourite drink is hot apple cider. It’s yummy and great to drink during the Michigan weather change.
Movie: Oh this is a tough one. I have to with a top three. I love Return of the Jedi, Lord of the Rings and Princess Bride.
Music: I listen to everything. I have no favorite LOL
Books: I love Kresley Cole and Gena Showalter.
Places to Vacation: Maui. My husband and I went there years ago and I would love to go back again. The place was beautiful and the snorkelling was awesome. Place to live: Georgia.
Places to Blow a $100 dollars: I hate blowing money on anything. LMAO But if I were to blow a $100, it would have to be on my friends or family to justify it. Take them out to eat or have a giant bash for the kids with the other neighbourhood kids.
Candle scent: Yankee Candle Apple Cider
Holiday: Christmas
Wine or beer: White wine
Favorite TV Show: Ghost Adventures
Favorite season: Fall

Be sure to tell me if we have anything in common or let me know some of your favorites!

That’s the best way to describe Jackie Nacht’s stories. I was introduced to M/M Romance through my sister, Stephani, and read it for years. Then, I thought it was time to put my own stories on paper. I began writing short and sweet stories that ended with a happily ever after...and sometimes more than one, in the case of my YA Fork in the Road series, which has interactive endings.

Thinking back to my own book addiction, where there were many nights I stayed up way too late so I could read just one more chapter—yeah, right—I decided to write short romances for young adults as well as adults. Hopefully, they will give high school and college students, or working men and women something they can read during their lunch hour, in between classes or just when they want to briefly get away from the daily stresses of everyday life.