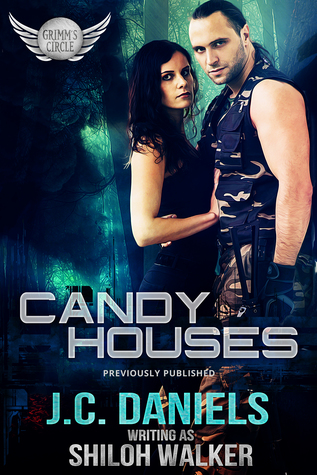 Think you know fairy tales? Guess again.
It’s been hundreds of years since Greta’s so-called story came to an end and it didn’t end with a happily ever after then. Why should she expect it to be any different now?
She’s a Grimm—a special kind of guardian angel and official ass-kicker in the paranormal world. Between trying to stay alive, training new Grimm and dealing with demons, romance is hard to come by. Then there’s the fact that there’s only been one man ever who really made her heart race.
And he’s been out of her life for a long, long time…
But now he’s back and just in time.
Greta needs Rip’s help.
There’s an unexpected threat to their world, a betrayal none of them saw coming.
Working together is the last thing they want, but it just might be their only chance.
A fairy tale best suited for grown-ups…don’t say you weren’t warned.

J.C. Daniels is the alter ego of author Shiloh Walker and was created basically because Shiloh writes like a hyperactive bunny and an intervention was necessary.  J.C. is the intervention.  The name… J.C. Daniels is a play off of the three people who pretty much run Shiloh’s life.

J.C./Shiloh Walker has been writing since she was a kid. She fell in love with vampires with the book Bunnicula and has worked her way up to the more…ah…serious works of fiction. She loves reading and writing just about every kind of romance. Once upon a time she worked as a nurse, but now she writes full time and lives with her family in the Midwest.  She writes urban fantasy, romantic suspense and paranormal romance, among other things.

You can learn more and connect with JC at