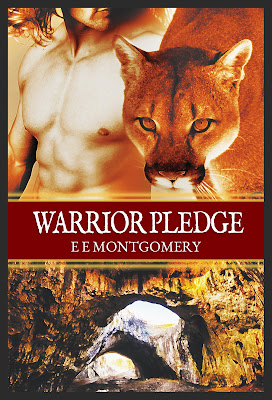 When the two moons of Thalazar cross orbits, the Warrior Pledge must be completed or the cat-shifting Mafdeti nation will face annihilation. There are four who can save the people and their land: the Silver Shining from Rock, the Great Heart Farseeing, the Changeling, and the Pure. They must find each other before time runs out.

Silver-eyed Checa is Captain of the Guard for the Mafdeti. Thanks to the friendship and loyalty of Heath, son of the Mafdeti Matriarch, Checa has survived and thrived after a childhood of horrific abuse. He knows Heath is his Bond-Mate but refuses to bond with the younger man because he feels he isn’t worthy. Nor does Heath’s mother approve of her son bonding with a lowborn warrior.

Together they face deadly wing-strikes from carnivorous birds, earthquake, betrayal, ambush, and an enemy invasion, only to be confronted with the possibility that the Warrior Pledge will bond Checa and Heath to others. If Checa is to complete the Warrior Pledge, he must overcome the belief that he doesn’t deserve Heath’s love, and fight for the one man who can make him whole.

Deleted Scene - The death of Beattie


Warrior Pledge is a fantasy novel released by Dreamspinner Press on 3 October. As usual with my writing, the book went through many incarnations before I finally got it right. I love the story as it is now but there are many layers that didn’t make the final cut. I thought I’d share one of those layers with you today.

Rim, one of the four people in the Warrior Pledge, originally had a much larger part to play. He was once married but lost his wife to the norrgel. That was also when he discovered that he has the extremely rare and unusual ability to change gender at will. This scene describes Beattie’s death.

My marriage came as a surprise. I met Beattie at a political rally. Her father was running for Protector. She was stunning; tall and thin and not at all athletic. Beattie and I didn’t love each other at the beginning of our marriage. We married because we had the same political aspirations, but by the time I was elected Protector we were inseparable. Beattie was my best friend, my confidante and my lover; with her help, I gained Protector by my twenty-fourth year.

Towards the end of my first year as Protector, Beattie died. I don’t talk about it. I don’t think about it if I can avoid it. My grief for her is buried deep, entangled with the fear and the shame from that time. Inseparable still. And it changed me. I’m quieter, more focused, I need more control but I’m less willing to instigate a confrontation. If I get overexcited or stressed it might happen again without my knowledge or consent.

Beattie was taken by the norrgel. We were at Benton discussing a sudden drop in the water table and the impact it was having on crops with some farmers. We were out early in the morning just on dawn, an hour before the norrgel arrive in that area. We weren’t concerned about getting caught out. We had the full hour and there was a hide nearby. The call of ‘wings up’ came and we started running to the nearest hide when Beattie noticed some children playing in the fields to the east.

She ran towards them. I was twenty man-lengths ahead before I noticed she wasn’t with me. I turned and saw immediately she’d never make it if she got the children – she couldn’t run that fast. They hadn’t noticed the norrgel and were far enough away they didn’t hear the call, so they were still playing tag and chase.

“Beattie!” My scream for her still echoes in my dreams. I ran after her, gauging the distance; I’d make it if I pushed it. It would be easier if the children came to us though so I yelled again, the bellow of my voice echoing across the fields. Finally, the children noticed me, but they didn’t recognise me or Beattie and they ran away. I caught up with Beattie. “Go!” I pushed her towards the hide and changed direction to intercept the children.


By now they’d noticed the norrgel and were running towards the hide. I grabbed the two smallest and slowest, then noticed Beattie was still coming towards me. I thrust the two children at her and yelled again to go. Finally she turned towards the hide. There were three more children running towards me. I met them and swung one onto my back and grabbed the other two into my arms then took off for the hide again. They were only small children but three of them added enough weight to slow me down. I was still powering over the ground but I noticed the difference in my speed and in my muscles and lungs. I wouldn’t be able to keep to the pace for long. I overtook Beattie who was struggling with her two. I didn’t stop. If I stopped we’d all die.

Taking those three children to the hide first and then going back for Beattie and the others gave us a better chance. Intellectually I know that, even if I keep dreaming I could have saved her. Should have saved her. If only she’d turned back when I first told her to.

The farmer came out from the hide to take the children. My lungs were working like a bellows but I turned back to Beattie and ran. The eastern sky was black with norrgel, their eerie cries scraping down my spine. Dust flew as I powered along the furrows towards Beattie. She stumbled as I reached her, and I barely managed to grasp the children before she dropped them. “Hurry!” I turned and ran back to the farmer who was waiting nervously not far from the hide entrance. I passed the children to him. Others came to the hide entrance to grab them and take them inside.

I turned to Beattie, to grasp her hand and drag her into the hide with me but she wasn’t there. At first I couldn’t see her, then I did. She’d fallen and was struggling to rise. “Beattie!” I screamed at her. I surged forward to go to her but hands grabbed me from behind.

The air around me swirled, dust rising and stinging my skin. “Beattie!” The air darkened as the norrgel came in from the east and above and filled the sky. I fought to move forward to go to Beattie and bring her to the hide but more hands held me, pulled me back, my feet dragging furrows in the ground. And still Beattie tried to rise.

Suddenly, the norrgel were there, making their first pass and Beattie began screaming. I was pulled into the hide still hearing her screams. She screamed for more than an hour. I watched the frenzy of the norrgel feeding, sucking her liquefying body from her, just metres from the hide. Once I saw her hair, red-gold in the morning light, a strand of it flying, but it too disappeared under the writhing mass of black birds.

By sundown the norrgel had gone and the only thing left of my wife was her wedding band and a dark oily stain. I staggered to her, still unable to breathe calmly.

The farmers tried to get me to leave with them but I refused. I don’t know if I was lucid enough to make my request clear or just too stubborn, but they let me be and I dropped to my knees next to the stain. I reached out to touch all that was left of Beattie, wanting to draw her out of the soil and back into my arms. I’d seen her here, the early morning sun glinting off her strawberry gold hair, her mouth open, eyes full of tears and pain and fear. This was all that was left of her. All that was left of six years of getting to know each other and learning to love.

It was like she’d never existed. Like I didn’t exist. Like I was not me but someone else. Those words circled around and around in my mind. It would be better to be someone else. If I was someone else I wouldn’t be me. I wouldn’t have had to watch Beattie die, wouldn’t be left with nothing but a stain in the ground to represent the best of my life. I could be someone totally different. I could be Beattie with her soft, smooth skin, her long, thin legs and her softly rounded hips.

Just imagining Beattie’s form calmed me. I closed my eyes and focused more fully. Someone else. I wished I could be someone else. Pain ripped through my body. My scalp tingled and stretched, my skin rippled as all my muscles spasmed and changed. My ribs compressed, making me gasp until my lungs shrank and I could breathe again, then my pectorals lifted and breasts popped out on my chest. I cried out in shock then grasped my genitals as I felt them stir. Under my fingers, they shrank, disappearing as I cupped my balls until nothing but a cavity remained. I screamed, my mind blanking. Only my screams pierced the darkness that consumed me and even they faded as my raw throat refused to make the noise. The blackness in my mind consumed me.

I came to in a hut when a child placed a cold compress on my forehead. I’d no sooner snapped my eyes open than I surged upward, accidentally knocking the child over. I grabbed my genitals, sinking to the floor sobbing in relief when my fingers closed around the familiar weight.

E E Montgomery wants the world to be a better place, with equality and acceptance for all. Her philosophy is: We can’t change the world but we can change our small part of it and, in that way, influence the whole. Writing stories that show people finding their own ‘better place’ is part of E E Montgomery’s own small contribution.

Thankfully, there’s never a shortage of inspiration for stories that show people growing in their acceptance and love of themselves and others. A dedicated people-watcher, E E finds stories everywhere. In a cafe, a cemetery, a book on space exploration or on the news, there’ll be a story of personal growth, love, and unconditional acceptance there somewhere.

Have you ever wanted to be someone different? I’d love to hear about how you made it happen, or how you came to terms with it. I’ll choose one from the responses to receive any one ebook from my backlist.