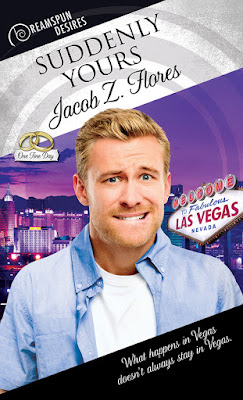 "What Happens in Vegas Doesn't Always Stay in Vegas"

Cody Hayes is having one epic morning-after. The hangover following a Vegas bachelor party is nothing new to him, and neither is the naked man in his bed.

His apparent marriage is a different story.
Carefully plotting every detail of his life carried Julian Canales to a senate seat as an openly gay man. A drunken night of Truth or Dare isn’t like him… and neither is marrying a man he just met. He’d get an annulment, but the media has gotten wind of his hasty nuptials. If Julian’s political career is going to survive, he has to stay married to a man who’s his opposite in every way.

Now he must convince Cody that all they need to do is survive a conservative political rival, a heartbroken ex, their painful pasts… and an attraction neither man can fight.

Watch Jacob read an excerpt from the book! 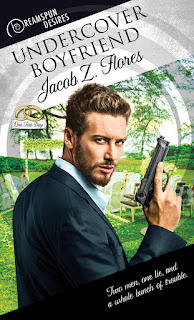 Summers in Provincetown, Massachusetts, provide Jacob with inspiration for his fiction. The abundance of barely clothed man flesh and daily debauchery stimulates his personal muse.
When he isn’t stroking the keyboard, Jacob spends time with his daughter. They both represent a bright blue blip in an otherwise predominantly red swath in south Texas.

You can find Jacob at

$50 Amazon Gift Card for the grand prize and 5 winners will win free copies from Author’s Dreamspinner back list.