This book contains explicit M/M sexual scenes and strong language. It is intended for mature, adult audiences only.

There is a trigger scene within this book. It includes a hostage scene and leads up to but doesn't include a rape.

The final episode in Tony and Will’s story.

After his encounter with Will, Tony was left more confused than ever. He’d never expected to experience the sensations, the pleasure that Will had brought out in him and it had excited, but confused him.

After every encounter, Tony was left more disturbed at the level of arousal that Will could create in his body. The emotional conflict Tony faced, wanting to continue and wanting to run away were tearing him apart.

Just when Tony thought he could handle and accept his attraction to a man and finally move their relationship forward, a man from his past threatens to destroy the fragile trust Tony is developing.

Will their burgeoning relationship survive and continue, or will the shadows of his past prove too much for Tony?

Will he fight for Tony or will he walk away?

Is Tony too much trouble or a man worth waiting for?


Will stepped forward into Tony's personal space. Tony wanted to move back but stayed where he was. He didn't want Will to see that he intimidated him.
"Let me remind you of what has happened between us. You left me. Not once or twice but three times. I have tried to contact you, and you have ignored me. So you tell me, why should I have waited for you?"
"I needed time. I needed –"
"All you had to do was tell me that," Will interrupted him. "But, you said nothing. You didn't tell me anything. You left me hanging, not knowing what the fuck was going on. I felt used, Tony."
Tony glanced away as he closed his eyes. "I'm sorry..."
"It doesn't matter now. You've had your little gay experience, got what you needed." He sighed as he ran a hand through his hair. "Don't come back, Tony." Tony watched as Will stepped back into his house and went to shut the door. No, he couldn't just walk away.
Tony shot forward and grabbed the door pushing it open and forcing Will to take several steps back into the hallway. Tony slammed the door closed behind him as Will shouted, "What the fuck..."
He grabbed Will by the arms and pushed him up against the wall before pressing his body against his and holding him there. He stared into Will's eyes before he closed his and kissed him. He felt Will's body tighten against his a split second before Will tried to push him off of him breaking the kiss.
Tony released one hand and grabbed Will by the hair pushing him back against the wall and kissed him again. He ran his tongue over Will's bottom lip, but that didn't get a reaction. Will didn't kiss him back. He opened his eyes slowly and stared into Will's dark blue ones. He went to step back when Will suddenly pushed him back and spun him, so he was against the wall.
Tony's eyes went wide, and his breath caught as he watched the pupils in Will's eyes expand, and a slight flush rose on his cheeks.


"I shouldn't..." Will whispered but Tony wasn't sure who he was speaking to. 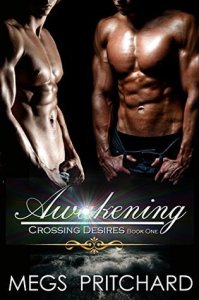 Tony likes women. Always has. Always will. So when he wakes up in a strange bed after a drunken night out, he isn’t too concerned.

Thinking he’d scored with a woman from the club he’d been in the night before, he was shocked and horrified when he realized he was in a man’s bed.

What the hell happened last night?

With that question in mind, Tony quickly leaves before seeing the man he spent the night with, but in his haste leaves something important behind.

When the man he spent the night with calls him, Tony realizes that he has to meet him in order to get back what he left and that maybe he might not be as straight as he once thought.

With his brother’s help, Tony begins to question what he thought he knew about his sexuality and where the answer to that question might lead him.

Megs Pritchard lives in England and is a mother to two small boys. When she isn’t working or being mummy, she is busy writing about complex characters that know the harsh realities of life but want a HEA.

A lover of M/M and M/F romances she believes everyone deserves to be happy, healthy and loved.

Growing up in a military family, Megs has traveled Europe and has a great deal of respect and gratitude for all the men and women who have and who still serve. Her dream job was to be a Bomb Disposal Expert and even had her own ‘kit’ when she was younger.