Please welcome J.A. Rock who's here with the latest book in the Subs Club series,

Hi! I’m J.A. Rock, and I’m touring the internet to talk about Slave Hunt, Book 5 in The Subs Club series. Thanks so much to the blogs that are hosting me on this tour, and be sure to leave a comment with your contact info for your chance to win a $15 Riptide Publishing voucher. 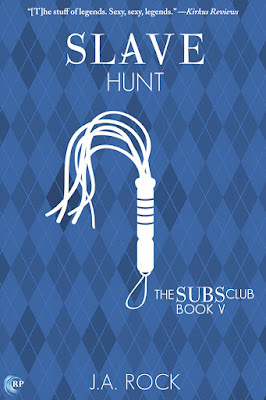 Thirty people. Two hours. Only the strong will survive.


When Riddle decides to put on a slave hunt, the Subs Club is on board. Tops hunting bottoms in the woods with paintball guns? Yes. Captives strung up on whipping posts, at the mercy of their captors? Hell yes. But on the morning of the hunt, nothing’s going according to plan. Miles and Drix are at odds over Miles’s reluctance to move in together. Dave is determined to show up D, who thinks Dave won’t last two minutes in the woods. Gould finds himself torn between obeying his master’s orders and living out a longtime fantasy. And Kamen inadvertently becomes a double agent when he aligns himself with two different parties.

By the end of the hunt, alliances will be forged and broken, loyalties will be tested, relationships will be strengthened…and someone will barrel roll. Narrated by ten different characters, Slave Hunt tells the story of two hours in the woods that will change everyone forever. Or at least, remind them that love is the greatest victory of all.

Slave Hunt has ten narrators, so on this tour I’ll be introducing you to the new POV characters—love interests and friends from the original four books who are now getting a chance to narrate.

Today, I’m introducing you to Maya. She’s the college student introduced at the end of Pain Slut who likes the Subs Club, but struggles to reconcile the fact that when she hangs out with them, she’s pretty much the token girl. She’s also struggling with her identity as a kinkster—she tells Miles in Pain Slut that she wants extreme kink but isn’t sure how to find a partner willing to go there with her. And throughout the next three books, she has an on-again, off-again relationship with Fucktopus, the tentacle furry who stalks the Subs Club message board.

In Slave Hunt, we learn a little more about what Maya wants: sex. Lots of it. Specifically with a cute puppy player. And with everyone. But especially with the pup. She also wants to be Katniss Everdeen. So bad.

We also get some insight into how she really feels about the guys of the Subs Club—she loves them, but thinks they’re total doofuses. Which is fair. Throughout the previous books, Maya and Kamen have developed a special bond, wherein Kamen alternately acts like her overprotective dad and relies on her for advice. In Slave Hunt, we really see that manifest as the two are forced to team up.

For Maya’s voice, I wanted a combination of smart, no bullshit, and bitingly sarcastic. The quasi-arrogance of being twenty-one combined with the insecurity of struggling to find what she wants. I loved getting to know her better, and if the series continues, it will definitely be with her.

About The Subs Club

After the death of their friend Hal at the hands of an irresponsible dom, submissive friends Dave, Kamen, Miles, and Gould band together to form the Subs Club—an organization seeking to expose dangerous local doms. The club slowly evolves as romances blossom, loyalties are tested, and tensions mount in a community already struggling for unity in the wake of Hal’s death.

From domestic discipline to knife play to fashion paraphilia, and from family drama to new jobs to first loves, the members of the Subs Club explore life’s kinks inside and outside of the bedroom as they attempt to let go of the past and move forward.

The Subs Club series is available from Riptide Publishing.

To celebrate the release of Slave Hunt, one lucky winner will receive $15 in Riptide Publishing credit! Leave a comment with your contact info to enter the contest. Entries close at midnight, Eastern time, on October 22, 2016. Contest is NOT restricted to U.S. entries. Thanks for following the tour, and don’t forget to leave your contact info!

Promotional post. Materials provided by the publisher and author.