Blogtour and Review: Enjoy The Dance by Heidi Cullinan 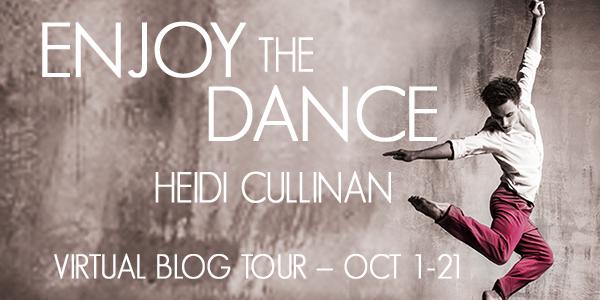 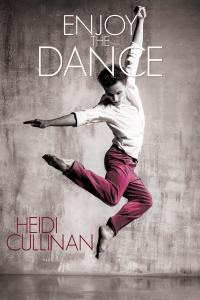 Kindergarten teacher Spenser Harris has carved a quiet, stable future out of his tumultuous past, but his world turns upside down the night a homeless teen appears on his doorstep—a boy whose story mirrors the one Spenser has worked so hard to overcome. The decision to shelter Duon is easy. What’s tricky is juggling the network of caregivers in Duon’s life, especially Tomás Jimenez.

Tomás wouldn’t have hesitated to take Duon in, but his plate is already full working three jobs to support his family. Though Spenser’s carefully constructed walls are clearly designed to keep the world at bay, Tomás pushes past Spenser’s defenses, determined to ensure the man is worthy of his charge. As the two of them grow closer, Tomás dares to dream of a life beyond his responsibilities, and Spenser begins to believe he might finally find a home of his own after all.

But Spenser and Tomás’s world is poised to crash around their ears. Duon’s grandmother isn’t sure she wants him to be raised by a gay man and challenges Spenser’s custody. Tomás’s undocumented parents could be deported at any time, and all the while the state of Minnesota votes on a constitutional amendment against marriage equality and the US Supreme Court debates whether or not Spenser and Tomás get a happily ever after. All they can do is hold tight to their love, hope for a better future…and remind each other to enjoy the dance. 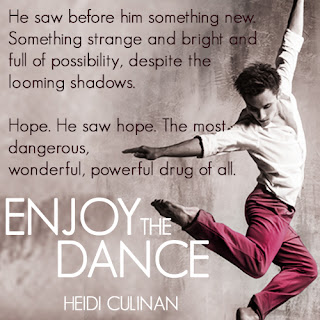 Interviews are a staple of blog tours, but this time I’d like to shake things up, because while I did my homework as best I could to write Enjoy the Dance, I’m by no means an expert. I wanted to let you hear from some people who know a lot more than me about the subjects touched on in the story, and one of those people is my friend (and friend to many of you!) Laura Adriana.

Thanks so much for letting me interview you, Laura Adriana! Would you like to take a moment to introduce yourself to the readers?

I’ve been a gay romance reader for a long time now, about seven years now. One of the things I love about this genre, specifically your work Heidi, is that it the stories have a lot more depth than straight romance. I specially love when I read characters with real life struggles or get to read about people that remind me of the people that I meet in my work.

I know you’ve worked in many different capacities in social justice and advocacy, and worked specifically as an immigrant advocate. Could you tell us a little bit about the work you did?

Yes, I’ve been working in social justice issues for about 11 years now. I began my work in Ethiopia, in Eastern Africa, working with rural communities to develop programs where women and youth were empowered to self-advocate to diminish harmful traditional practices like female genital mutilation and child marriage, I later worked in Central and South America doing HIV/AIDS prevention and treatment with high risk populations.

I came back to the U.S. in 2011 to Ithaca, NY there I began working as an immigrant advocate, in that job I worked with families who had come to the U.S. as refugees, as well as with immigrant families who needed assistance in gaining a path to citizenship, entering the workforce and advocacy within the social services systems. Finally, for the last two years I’ve worked as client services director for the agency that provides services and support to survivors of domestic violence, adult sexual assault and child sexual abuse in the county.

What was the most difficult part about your work in immigration advocacy?


The hardest part was having to tell families there was nothing I could do for them to gain legal status. It is not easy looking at people who have been doing back breaking work in this country for decades, who have raised their children here that they need to continue to live in the shadows and in fear, because they are not welcome here.

What was the most rewarding part?

I am immigrant myself, I came from the Dominican Republic at the age of 23 to attend graduate school in New York City. Although I had huge privileges, I still came here by myself and know how daunting it is to be in a new place and having to make your own way. It was a huge honor to be able to be part of the story of people who came to this country to work hard and build a life here. For a lot of us the reality is that in this country we can do much more than we could in our own, and being able to be part of that narrative for others made me very proud.


There’s more to this interview! Come read part two at Back Porch Reader on October 4 and part three at Bike Book Reviews on October 5. Follow the rest of the blog tour, with other interviews and information at Heidi’s website. 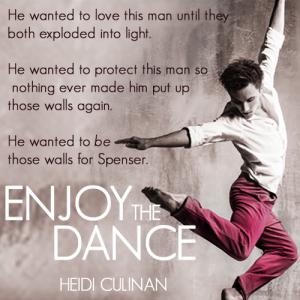 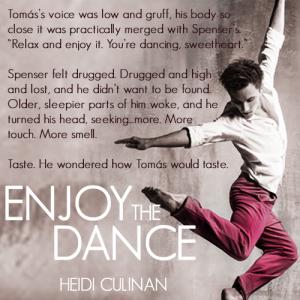 This story is the 2nd book in the Dancing series, and picks up after Dance With Me concludes, which means it takes place toward the end of 2012 and the beginning/middle of 2013.

During this time, Minnesota, where Spenser and Tomas (and Ed and Laurie) live, had a Marriage Amendment on the ballot, which would, as a state constitutional amendment, banned same-sex marriage in the state. DOMA is also still in place when this book begins.

We first meet Spenser when he comes home to his apartment to find a young man slumped in the hallway, clearly showing signs of having been in some kind of fight. He's bleeding and hurt, and looking for Tomas, who lives with his parents in the apartment across from Spenser and is a dance instructor at Laurie's studio, among other jobs.

Spenser is an elementary school teacher, and he wastes no time in coaxing the young man into his apartment to take care of the wounds and offer him a shower, while they wait for Tomas to come home.

The young man is Duon, whom you might remember as one of Laurie's students from the first book.

While the romance that develops between Spenser and Tomas doesn't exactly take a backseat to the rest of the plot in this book, it is quiet and subdued, but provides the backbone to everything else that happens within.

Tomas' parents are illegal immigrants, and while Tomas and his sister were born in the US, his parents could theoretically be deported. Tomas' sister also tends to dump her children at her parents place while she runs off living her life, which has Tomas working multiple jobs to make ends meet. There's not a lot of time for him to date, but after he sees Spenser take care of Duon, and then apply to be the young man's guardian/foster parent, a spark begins a slow-burning, smoldering fire.

Spenser knows what it's like to be in the foster system, having grown up in it, and he has built a bunch of walls around himself, to avoid being hurt. He had two foster mothers, with whom he lived after aging out of the system, and while one has passed on, the other is still somewhat prominent in his life, an anchor of sorts, someone he knows he can rely on if he needs it. He immediately jumps in when it's clear that Duon cannot return to his grandmother's house, not wanting the boy to be sent to a group home.

The book has a very political overtone, considering that DOMA is still in place, a state amendment banning same-sex marriage is on the ballot, and they're still four years away from the SCOTUS decision in the Obergefell case. Even though Laurie and Ed are married, their marriage might not be valid in Minnesota if the amendment passes. (Spoiler alert: It doesn't) The author also makes a point of showing the lack of funding and resources that plague many Social Services departments, as well as the difficulty in securing citizenship for illegal immigrants.

The romance is by design slow-burn, and not front and center in this book, but it is there, smoldering and providing warmth. There are some hot as hell scenes too, when Spenser and Tomas finally get it on, and boy, oh boy, Tomas talking dirty is super sexy.

Both Spenser and Tomas are givers. They care so much about the people in their lives, and find joy in helping others, in being there for each other, in doing little things to make the other's life easier. I enjoyed that part of their romance so much, because it showed me how much they truly care about each other. Tomas draws Spenser out of his shell, and Spenser is a safe harbor for Tomas to cast his anchor. They meshed so well, despite their differences, and it was a joy to read their story.

While this surely isn't your typical Heidi Cullinan romance, I would still recommend you read this book. And above all keep dancing. 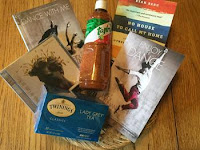