Blogtour: In From The Cold by JT Rogers

In From The Cold 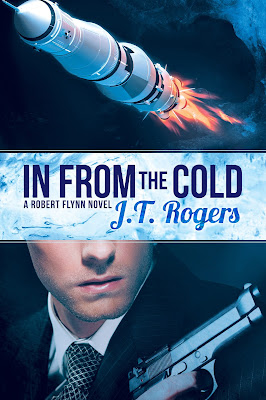 Robert Flynn abandoned a sterling military career when his best friend and fellow soldier, Wesley Pike, died under his command. More than a decade later, Flynn’s quiet life is disturbed by the troubles of a fledgling CIA and Alexander Grant, a flashy agent with a lot to prove. As the space race between the United States and the Soviets heats up and the body count rises, the two men fight to find common ground. Grant knows Flynn believes in the cause, but all Flynn sees is the opportunity to fail someone like he failed Wes. An attack by a Soviet agent spurs Flynn to action and a reluctant association with the agency, and tilts Flynn’s world on its axis with a shocking discovery: Wesley Pike may be alive and operating as a Soviet assassin.

With Grant to bankroll the operation, his superiors looking the other way, and Flynn’s hard-earned peace officially forfeit, Flynn reunites his old team with the singular goal of finding Wes. But they get more than they bargained for—Wes is amnesiac and dangerous, brainwashed into becoming the perfect weapon. Flynn struggles to reach his friend, lead his team, and navigate his charged relationship with Grant—something neither of them expected and aren’t sure how to parse—while coming to grips with his long-buried feelings for Wes.

Before I get started with an exclusive excerpt from my debut novel, In from the Cold, I’d like to thank the fine folks at My Fiction Nook for hosting me today! Happy reading!
EXCERPT from IN FROM THE COLD

The next few days were unnervingly normal.
Life at the bakery continued apace. Flynn had returned to work early Monday morning as though the events of the weekend were nothing but a bad dream. Only the stubborn sting in his shoulder and his disaster of an apartment served as concrete reminders. Mrs. van Wilder had let him move his things into the empty suite on his floor during the repairs, which she assured him would be entirely covered by the CIA, the same as her medical care.
But Flynn himself hadn’t heard from Grant or his associates since Mr.  Cartwright had dropped him off Sunday afternoon, and now Wednesday was drawing to a close without so much as a phone call from the Agency.  Not for the first time that day, Flynn’s thoughts began to drift to Ollie’s file and its worrying implications. Flynn was so deep in his own head that he missed the bell signaling a new customer, and he startled when a familiar voice greeted him.
“What’ve you got for me, Flynny boy?”
Theodore Kelley was half-draped over the display case, tapping his cane against the wooden floorboards in teasing impatience. He was a tall, square-jawed man with a head of thick black hair that had begun to gray at the temples. Dark glasses, hiding eyes blinded in the Battle of Peleliu, were perched on his nose. Flynn had known Teddy since they were kids—boyhood neighbors who’d met at Sunday mass, Flynn a couple of years older—though the war had seen them follow different paths. Teddy’d opted for the Marines, though nowadays he was one half of Kelley & Donovan, a small Brooklyn law firm that was recovering from some thin years. Flynn hadn’t seen as much of him since Teddy’s son, Thomas, was born, but once a month or so, Teddy made a point of stopping by the bakery. Given what had nearly happened with Grant, Flynn thought Teddy’s appearance that afternoon was timely.
After all, Theodore Kelley was one of the last men Flynn had kissed. They’d stopped their affair years ago—and at some point, it had been an actual affair, Teddy married and very much in love with his wife, unable at first to turn down his best friend and once-lover in those times Flynn needed comfort—but there was still an easy intimacy between them. Their relationship, such as it was, had always been more pragmatic than romantic. Staying close had been a given.
Flynn smiled, genuinely glad to see his friend, even if the weekend’s events were still weighing on him. He never did get around to making that call.
“Couple stale bagels. You interested?” Flynn answered, walking over to lean on the counter in a mirror of Teddy’s posture. Teddy grinned, face tilting toward Flynn’s new position.
“I’ll take what I can get, I guess.”
“Come on. I’ve got a couple loaves from this morning, and some cookies coming out soon.”
“Well, you know my weakness.” Teddy laughed. Flynn started putting together a bag, wrapping bread in paper and tying it off with jute.
“Let me know how many piecrusts Patty needs this year. I’ll get them made and sent over. She can freeze them, you know. They’ll stay good for a long while. Feel free to overorder.”
Teddy shook his head with a sardonic purse of his lips.
“You always send more than we ask for, anyway, Rob.”
“I guess.”
Invested as ever in the well-being of Teddy’s family, Flynn asked after business and Tommy. Teddy caught his old friend up on recent cases and holiday plans, finishing, as always, with an invitation to Christmas dinner. Some years Flynn went, and he felt warm and welcomed and was happy to be there. Other years he couldn’t bring himself to, and he warmed himself with whisky instead and kept his own company because it was all he was fit for, he figured.
“I’ll let you know soon as I can. I promise.”
“Uh-huh,” Teddy said, head held at an angle, as though he were listening carefully to something only he could hear. “There something you not telling me, Rob?”


Flynn’s eyebrows lifted, and he glanced up to catch his own innocent face reflected in Teddy’s glasses.
“Not that I can think of.”
“We both know you never think very hard.”
“Well, when you’re as naturally brilliant as I am, you never have to,” Flynn pointed out, slipping the wrapped items into a burlap bag with canvas straps. He slid it onto the counter so Teddy could hear where it was placed.
“Robert.” Teddy never used his given name. There was an expectant note in his voice, one that demanded an answer Flynn couldn’t give.
“You know if anything interesting had happened to me I’d tell you,” Flynn said, although Teddy knew well enough what he’d done in the war—what he’d been like—to know Flynn had a very high standard for interesting. “Not like I talk to anyone else.”
Teddy sighed, straightening with defeat. “All right, all right,” he replied. “A man can have his secrets—even you. If you change your mind, though....” He tapped his nose and hoisted the bag of baked goods over his shoulder. “I’m always just a phone call away.”
After saying their good-byes, Flynn turned the hand-painted wooden sign from “Welcome! We’re Open” to “Sorry, We’re Closed,” then finished his preparations for the next morning. Once everything was clean and in its place, he donned his coat and hat and braced himself for the winter chill. He was halfway home when he spotted the Bentley parked a street ahead. Desperate for an update, he quickened his pace, and his pulse fluttered in his throat. The rear door was already popped open by the time he caught up, and Flynn climbed inside without hesitation.
“What’s the news?”
“We’ll find out when we get there,” Grant replied without missing a beat. “Flynn, about before—”
“Is this an official meeting, or just Ollie showing us something new?”
“Flynn,” Grant insisted, frowning, and Flynn met his eyes, features a  perfect mask of neutral, polite interest.
“I wanted to apologize for being gone the other morning. I got an early call and had to be in Midtown to handle it.”
“It’s fine,” Flynn said, grateful that was all Grant was referring to, but angry there was anything for him to feel grateful about Grant avoiding.
“Right.” Something about the set of Grant’s mouth suggested he wasn’t quite satisfied with that answer. “How’s that shoulder treating you?” he added, reaching out and brushing his fingers against Flynn’s arm. Flynn hid his surprise.
“Fine,” he said again, glancing out the window, unsure of Grant’s angle but certain he had one. Flynn could feel the weight of shame and embarrassment settling over him. It was familiar. He hadn’t missed it. “Barely notice it. It’ll be healed in no time.”


Grant’s eyes narrowed, but he withdrew and leaned back onto his side of the seat. “If you say so.”

J.T. Rogers grew up wanting to be either a superhero or a spy—but rather than pick one over the other, she chose to become a writer instead so she could be both in her spare time. Her fiction reflects her childhood obsessions, blending together the distrustful, cloak-and-dagger world of spies with the high-octane action and camaraderie of her favorite superheroes.

The product of a bilingual education and an alumna of a handful of universities, J.T.’s passions include history, comic books, and Shakespeare. She has lived all over North America and loves to weave threads of authentic local color into her stories. Just ask her about Lucy the Elephant.

Currently, she’s living the dream of being overworked and underpaid. She writes to stay sane—or that’s the story she likes to tell, at least.