Blogtour: Eyes Only For You by Andrew Grey

Eyes Only For You 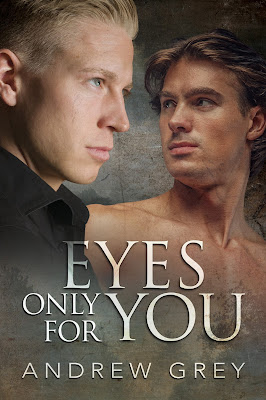 Marcello Bagnini has a history of falling for the wrong men, and it seems he’s done it again. Working out at the gym with his straight friend Jerry is becoming harder by the day—in more ways than one. Worse yet, Jerry isn’t the only one who notices Marcello’s wandering eyes. So instead of risking his friendship with Jerry and alienating the other guys at the gym, Marcello keeps his feelings to himself.

Real estate agent Jerry Foland has never explored his interest in other men, but there’s something different about Marcello, and Jerry’s starting to think he might like to see where his attraction could lead. However, Jerry’s controlling father makes it clear that it’s either stay on the straight and narrow or Jerry can say good-bye to his family.

As much as they try to stay away from each other, their lives overlap, both at the gym and when Jerry is contracted to sell the home of one of Marcello’s friends. Friendship grows into more, but Jerry’s father has his own agenda, and it doesn’t include having a gay son.

“And he’s someone you know, and you can’t figure out why you’re attracted, but you are, and you can’t seem to stop it no matter what you do?” Marcello supplied.
“That’s it exactly. What the hell do I do about it?”
“Beats me. If you figure out the answer, please tell me, and then we’ll both know,” Marcello told him. Jerry crinkled his eyebrows. He was pretty sure they were both talking about the same thing. He knew he’d been fascinated with Marcello for weeks now, and he’d seen Marcello looking at him. But he figured it was because Marcello was gay. Now he wondered if Marcello was trying to say that he liked him without coming out and actually saying the words in case Jerry got angry.
This whole thing was more confusing than anything he could ever remember. He wanted to ask Marcello just to come out and say what he meant, but he couldn’t bring himself to actually say the words in case he looked like a complete fool. So he stayed quiet and wondered what in the hell to say or do. Maybe the best thing was to just leave and extricate himself from the situation. That way he could go home and try to figure this shit out on his own. Not that he’d had much luck with that before.
“What do you want, Jerry?” Marcello asked.
It would be so easy to just say what that was. Close the gap between them and see if Marcello’s lips tasted the way they had in his dreams and if he felt as hard and strong as he did when the lights went out and Jerry was lying in his bed, letting his mind wander over thoughts he knew were dangerous. “I wish to hell I knew. Do you?”
“Yeah. I know what I want, but I can’t have it.”
“Why not?”

Jerry knew it would be so much easier if Marcello made some sort of move. That way Jerry could decide if he liked it, and if he didn’t, then he could back away and it would be Marcello’s issue. Maybe that’s why he didn’t. Jerry was pretty sure Marcello was interested in him when he said there was someone he liked but couldn’t have, and he figured all it would take to find out would be for him to lean in and get closer.
But he wasn’t gay. Marcello could talk about scales all he wanted, but guys who were with other guys were gay, and that was it. He understood Ronnie and Clay. Hell, he’d never seen his friend happier, either of them. And he liked Marcello. But he wasn’t gay and couldn’t be gay. Jerry liked girls, and that was how it was supposed to be. He had to put these other notions aside and just be what he wanted and what his family expected. There was no other choice.
“I can’t make the first move. I won’t trap or pressure anyone into anything.” Marcello leaned forward a little and then stilled. Jerry didn’t move either. Marcello was so close, his scent surrounded him, and Jerry’s heart beat like a bass drum. He felt his fortitude start to waver and leaned closer, holding his breath and parting his lips.
“Marcello,” a female voice called, and Jerry sat back, releasing Marcello’s hand, gulping for air. His cheeks grew heated as a slight, dark-haired woman entered the room.


Andrew’s hobbies include collecting antiques, gardening, and leaving his dirty dishes anywhere but in the sink (particularly when writing) He considers himself blessed with an accepting family, fantastic friends, and the world’s most supportive and loving partner. Andrew currently lives in beautiful, historic Carlisle, Pennsylvania.