ARC Review: A Kind of Honesty (A Kind of Story 3) by Lane Hayes 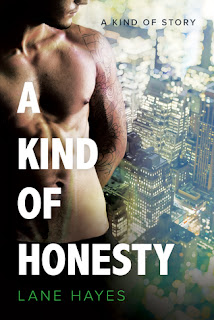 
Music is drummer Tim Chalmers’s great escape and the one thing that’s never let him down. But his band Spiral’s meteoric rise to fame has made it difficult for him to maintain a low profile. Unwanted press pesters him after a public breakup with a volatile ex-girlfriend who loves the limelight as much as he loathes it. Tim’s main goal is to avoid confrontation. However, when a handsome stranger in a dive bar turns out to be someone he might know, everything changes.

Carter Hamilton-Temple might be a successful financial consultant with more brains, sophistication, and charm than most, but he always falls for the wrong guys: closet cases or men with issues. He can’t fight his attraction to tattooed rock star Tim, but can he trust his own judgment? When the thrill of danger combined with a fierce physical connection proves too strong for either man to resist, a quiet liaison away from the public eye and curious friends seems like a safe bet. But some secrets are hard to keep. When rumors threaten to rock his world, Tim realizes it’s time to confront his fear with his own kind of honesty.

A Kind of Honesty is another win for Lane Hayes. I am in love with this series!

Tim, Spiral's drummer and the first-person narrator of the story, has been dating a model.

Wait. Let me rephrase that: He's been dating a scheming, conniving, money-hungry bitch. Fortunately, Tim breaks up with Miranda at the beginning of the book. (Unfortunately, she doesn't go away.)

Tim is bi and SO ready to act on his lustful thoughts involving men.

While in L.A., he visits a seedy gay club, where he meets the most beautiful man he's ever seen. The two spend a wild night together and go their separate ways. Imagine Tim's surprise when he sees his mystery man again . . . on a rooftop in New York.

Carter is Zeke's best friend. We met Carter in book 2, and I for one desperately wanted his story. Carter is wealthy and cultured. He's careful and discrete but knows how to get down and dirty. He leaves the boots on and wantonly wiggles his ass. Is it any wonder Tim loses his mind?


The sex in this book burned up the page. There's sex in a sleazy motel room, sex in the shower, and (bonus!) a butt-sex virgin! I think this might be Hayes' hottest book to date, and you won't hear me complaining.

You don't want slow or gentle. You want me to use you. You want me to fuck you so hard you feel me for days. You want me to be every fantasy you never let yourself believe you wanted . . . You got it bad, baby. You're desperate for dick, and I can't wait to make you mine.


This book isn't heavy on the angst, although there's some family drama. Tim's sister is an addict with a young son whose dad is about to seek full custody (and rightly so), and his mom is in la-la land.

The main conflict, however, is Tim refusing to be open and honest about his relationship with Carter. Tim is used to hiding. His first boyfriend screwed him over something fierce, and Tim just took it. He's always been too scared to rock the boat.

I loved Carter, but Tim frustrated me to no end. He seemed to care about his public image more than he cared about Carter. It's only when Carter calls him on his shit and says enough that Tim realizes what's really important and finds his own kind of honesty.

I needed a kick-ass epilogue and while the HEA was definitely there, it fell a little flat. I don't know what I was expecting, but I think Zeke and Benny's story ruined me (their HEA was just so perfect).

This book can be read as a standalone, but I don't recommend skipping books 1 and 2. This series is amazing and well worth reading in order.