Today we shine the spotlight on SB Alexander and 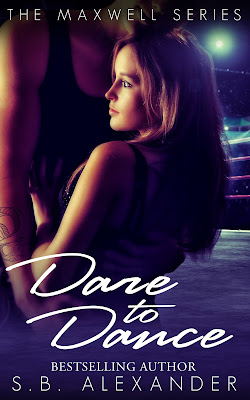 Hoping to sign with one of the biggest boxing promoters in the country, Kross Maxwell has to maintain a near perfect record. He can’t afford to lose any more bouts. But his head isn’t in the ring. Instead, he can’t seem to shake his past that’s been beating on his mind. To get back in the game, he goes in search of the girl he walked away from--the one girl who's always owned his heart.

Twenty-year-old, Ruby Lewis, is angry and frustrated with the way her life turned out. She dreamed of becoming a ballerina, but instead of performing for the rich and famous, she’s swinging her fists at girls twice her size in filthy, underground fights. She’d give anything to sleep in a bed, rather than the cold dark streets of Boston. Begging for her next meal, she often thinks of the friends she once had, the nice home she lived in, and the only boy to ever steal her heart. But Kross Maxwell wouldn’t want her now--not with dirty fingernails, ragged clothes and oily hair. But when she runs into him, the concrete wall she’s erected around herself threatens to crumble, and she can’t let that happen--if she wants to survive and get back the only thing that's ever mattered to her.


Dare to Dance can be read as a stand-alone. The book is intended for audiences 18+

S.B. Alexander’s books are filled with stories that tug at your heart, and are filled with romance, drama, action and suspense. As much as she loves to write, she also loves to read. Some of her favorite authors are Stephen King and Edgar Allen Poe, although in the past three years she's gravitated toward the paranormal and new adult genre, which is when she started her journey to write her first book, On the Edge of Humanity. Since then she's written other books, including the popular new adult novel, Dare to Kiss.

Alexander’s career has been colorful—a former navy veteran, high school math teacher and college professor, sales consultant, coach, and manager. She loves baseball, especially the Boston Red Sox, white powdered donuts, and handbags. Her husband calls her the bag lady. She enjoys playing golf, is moved by music and great stories, and will go out of her way to help people.

She believes words are the key to opening the door to extraordinary places with amazing characters that tell a great story.