Review Tour: Into You by Jay Northcote 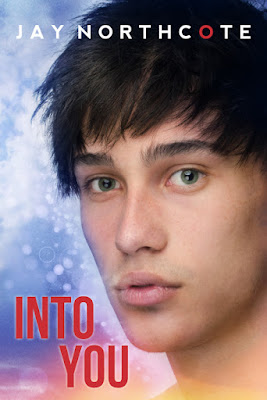 What do you do when the body you wake up in isn’t yours?


Olly and Scott promised to be best friends forever. They grew up on the same street, went to the same school, and did everything together. But one hot summer night, teenage experimentation caused hurt feelings and confusion, and their friendship was destroyed.

Four years later they’re both eighteen years old and in their final term at school. Scott is a football star and Olly’s preparing for a main role in the school play. After a heated argument in the street—witnessed by their mysterious, elderly neighbour—they wake up the next morning stuck in each other’s bodies.

With no idea how to get back to normal, they have to co-operate in order to hide their secret. Spending time together rekindles their friendship, yet feelings run deeper for both of them. With the end of school fast approaching, the clock is ticking. Unless they discover how to change back, they could be stuck in the wrong bodies forever.

The sound of music playing pulled Scott from a thick blanket of sleep into
wakefulness. He lay curled on his side; his room was darker than usual, as though someone had come in and closed the blinds while he slept. His bed felt weird, softer than it should be, and it smelled different.

He sat up, blinking in confusion as he looked around. He took in the room, the details unclear in the half-light that crept around the edges of the blind, but it was enough for him to realise where he was.

The posters on the wall were new, but the layout hadn’t changed in four years.

It wasn’t possible. Logic told Scott there was no way this could be happening.
He’d gone to sleep in his own bed—he hadn’t been drunk or high. So why the hell was he waking up in Olly’s room with no recollection of how he got there? And where the hell was Olly? The music that had woken him was coming from a phone on a docking station by the bed. He picked it up and pressed some buttons until it stopped. His brain was fogged with sleep and he couldn’t think clearly.

Scott got out of bed on shaky legs. His hip ached as though it was bruised.
Actually, his whole body felt weird. Perhaps he was sick? Maybe this was all some bizarre hallucination?

Pulling the cord to raise the blind, Scott flooded the room with light. He looked down at himself, only….

He closed his eyes and shook his head. When he opened them again, he still didn’t see himself. His body was too thin, his skin too pale, the hair on his legs darker than usual, and he definitely didn’t own any snug purple briefs like the ones he was currently wearing.

Stomach roiling with disbelief and terror, Scott turned to the full-length mirror on the wall and blinked.

Olly’s reflection stared back looking as horrified as Scott felt. Scott raised his hands to his face, and so did Olly in the mirror.

“This isn’t happening,” he said.

The voice was Olly’s too, softer and a little higher-pitched than Scott’s own.
It was the weirdest, most vivid dream Scott had ever had.

He pinched himself hard. “Ouch!”

Why wasn’t he waking up?

Olly shot up, heart pounding at the shrill sound. He opened his eyes and blinked in the sunlight.

He looked around wildly and closed his eyes again, refusing to believe what he saw. Obviously he wasn’t awake yet because he couldn’t be in Scott’s room. He hadn’t set foot in Scott’s house in years.

Olly cracked his eyes open again but still saw the white walls, the posters of Scott’s football heroes that Olly remembered from years ago, and the freakishly tidy desk that definitely wasn’t his.

The alarm clock by the bed was still making an awful racket, so he found the button to silence it.

“Scott?” he said hesitantly, then coughed.

What the fuck was wrong with his throat? His voice was deep and rough sounding. Oh God, no, please don’t let him be getting a cold. He couldn’t afford to lose his voice with all the play rehearsals coming up.

He pushed the duvet off and swung his legs around to get out of bed. He’d find
Scott and work out what the hell was going on. Maybe he had some weird amnesia after his accident yesterday, although he hadn’t hit his head. There had to be some explanation for why he was apparently in Scott’s bed rather than his own.

Then Olly looked down at his legs—and froze.

“What the fuck?” No long floppy fringe falling in his eyes. Instead he found short-cropped hair and his ear piercings were gone.

Now convinced he was dreaming, because that was the only possible explanation, Olly got up to look in the mirror. Scott’s handsome face stared back at him, the mouth slack with surprise and the blue eyes wide.

Olly shook his head in disbelief. No way could this be happening. No way.
This was the stuff of Hollywood movies, not reality. But cold, creeping panic rose in his gut, because apart from the fact that he appeared to be in the wrong body, everything else felt normal. Way too normal for it to be a dream.

“No,” he said loudly, putting his hands up and touching Scott’s nose, Scott’s
cheekbones, Scott’s lips. He felt every brush of his fingertips. “Oh, Jesus Christ on a bike, this is not happening. No.”

Jay Northcote does a great YA!!!

Back when they were younger, Olly and Scott were besties, running around their 'hood, spending mucho time at Olly's house, sleepovers, and even having tea with the old lady next door when a ball flies over the fence. Until a kiss and a lie changed it all, and now Ollie and Scott don't even speak to each other anymore.

Olly is out and proud, and Scott has a pretty girlfriend he doesn't like much. Olly is into literature and the performing arts, and Scott is a football jock. Soccer for you Americans.

In their last year of school, they stay as far away from each other as possible. Friendship is over. Dead. Finito.

Taking a corner just a little too fast in his car, irritated with clingy GF, Scott bumps Olly off his bike. Their subsequent shouting match is overheard by the little old lady from their younger days.

And the next morning, Scott wakes up in Olly's body and vice versa. Holy crap, right?

What follows is a comedy of errors in parts, and in other parts it's an exploration of walking in someone else's shoes. Because, see, not all is as it seems with Scott, and Olly's hatred is thisclose to still loving Scott.

Forced to work together to keep anyone from finding out what happened (like anyone would believe them, anyway), Scott and Olly start spending a lot of time together and begin seeing each other for who they really are. There are humorous moments, and confusing emotions, jealousy, and finding out things they never knew. Of course, being teenage boys with morning wood, there are some really, uhm, awkward moments when, in each other's bodies, they take matters into their, ahem, hands.

Their story is told in dual POVs, which was a little confusing initially, because even though Scott looks like Olly, he's still Scott inside, but to everyone else he's Olly, which made it a little hard to follow early on, but then I found my groove and it was all just fine.

As Olly finds out, once he's in Scott's body, Scott's homophobic and belittling father has made Scott's home life pretty unbearable, and you can imagine how Olly as a gay boy feels hearing the nastiness first hand. At the same time, Scott as Olly realizes how warm and welcoming Olly's family is, and how much he's missed out on - how much he's missed feeling part of that family. And how freeing it is to live your life being who you truly are.

It's a really cute story, one where both boys get a chance to see into each other lives, and especially Scott gets to find the courage to be who he really is, instead of someone his father wants him to be. And the more time they spend together, trying to figure out how to switch back, the closer they get again, until they are once again friends and then truly in love. And repeat the kiss, this time without the lie.

This is definitely YA, with intimate scenes limited to the above mentioned handjobs, some kissing and such, which is what I expected at most. The writing is engaging, and I was enthralled from start to finish, and slightly upset when it was over. Utterly adorable, bit fluffy, bit of angst, and a good dose of magic, with a great HEA - what more could you ask from a YA romance?


** I received a free copy of this book from its author as part of the review tour. A positive review was not promised in return. **

She comes from a family of writers, but she always used to believe that the gene for fiction writing had passed her by. She spent years only ever writing emails, articles, or website content. One day, she decided to try and write a short storyñjust to see if she couldñand found it rather addictive. She hasnít stopped writing since.