Morning My Angel by Sue Brown 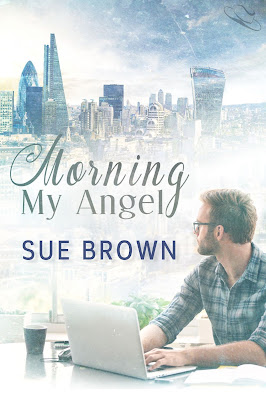 Josh Cooper, top US security field agent, is sent on an inter-agency assignment to London, when a partner in his firm goes missing in suspicious circumstances. Used to working in sole charge of his well-honed team, he clashes heads with the handsome, but pompous Cal, his UK co-operator and superior. Josh’s gut tells him something is wrong. He’s being kept out of the loop and Cal’s agenda is running on a different path.
He also has a personal issue to deal with. He’s involved in a cyber-relationship with “Charlie”, an unknown man who connected with Josh by accident. Their banter has led to deeper respect and a sexual interest, but now Josh is faced with a growing attraction to Cal. Between this conflict and the tension of the mission, Josh’s heart and head are overworked and confused. Things can’t get much worse.
Then Josh discovers the enemies he’s seeking have a new target: him.

Sue Brown is owned by her dog and two children. When she isn't following their orders, she can be found plotting at her laptop. In fact she hides so she can plot, and has become an expert at ignoring the orders. Sue discovered M/M erotica at the time she woke up to find two men kissing on her favorite television series. She had an Aha moment and put pen to paper that same day. Sue may be late to the party, but she's made up for it since, writing fan fiction until she was brave enough to venture out into the world of original fiction.Come over and talk to Sue at:sue@suebrownstories.comHer website can be found at:http://www.suebrownstories.com/