Thanks so much, Sandra and company, for hosting the Take Two video tour! Throughout the tour, I'll be taking you on video stops of one of my favorite places at the North Carolina coast and the location for Take Two: Bald Head Island.

Take Two is a second chance at love story set during a movie shoot. It's a sweet and sometimes funny story about love that won't quit, and includes anachronistic pirates, silly dialogue, and general mayhem as action star Sander Carson, a.k.a. Sam Carr, tries to woo back his estranged husband, pirate expert and history professor Wesley Coolidge. You can find all the videos after they're posted on my YouTube channel:

I hope you’ll enjoy this lighthearted romp and that you end up believing in second chances! The book is now available for preorder at Dreamspinner Press, Amazon, and all the usual suspects. -Shira 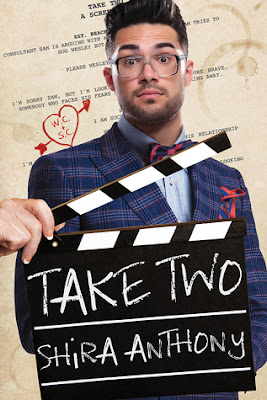 Shiver me timbers! When Professor Wesley Coolidge accepts a summer job as a historical consultant to a pirate movie being filmed in North Carolina, the last person he expects to bump into is his soon-to-be ex, movie star Sander Carson. Just like the flamboyant pirate he's playing, Sander, aka Sam Carr, is used to getting what he wants, and he makes it clear he wants Wesley back in his life.
Sam acknowledges it's his fault they split up. He lost Wesley when he left their life in New York City behind for a career in Hollywood. But Wesley has finally managed to put the pieces of his heart back together, and he isn't interested in Sam and Wesley: The Sequel. Sam soon realizes that convincing Wesley to give their relationship a second chance will take much more than apologies and reminders of good times past. If he wants Wesley back, Sam will have to show Wesley that they really can sail into the sunset together--a real-life happily-ever-after that won't end once the final credits roll.

The entire scene was surreal. Gorgeous boat, beautiful scenery, good wine, and me by my lonesome. In the grand scheme of life, it certainly wasn’t the worst outcome. Still, he wished he wasn’t alone.

He pulled his cellphone from his pocket and tapped the preset for Carl. If they couldn’t be together, at least Wes could describe the alternate universe he’d just stepped into for him. It took a few seconds for the call to connect, and Wes imagined the signal snaking its way down through Florida, then skimming the waves to the southwest, across the Gulf of Mexico, and over to Guatemala.

“This is Carl Stephens. I’m unavailable to take your call at the moment. Please leave a message and I’ll get back to you as soon as I’m able.”

Figures. Wes shook his head and disconnected the call. He’d catch Carl another time. He didn’t want Carl to feel guilty about the change in plans. It wasn’t as if he was suffering here in North Carolina anyhow. He replaced the phone in his pocket and glanced up at the fly bridge again. Why not? He’d never been particularly shy, and he figured he’d feel more comfortable hanging out with the crew instead of pretending to be some pampered Hollywood celebrity. He refilled his glass and headed up the stairs.

The fly bridge was every bit as Wes had expected. Sleek, with the newest instrumentation, radio, and radar. The seats and console were white, as was the rest of the yacht, and the panoramic view was impressive. The captain sat facing the console, only the top of his head visible over the high-backed leather chair.

“We aim to please,” the captain responded without turning around. His clipped British accent reminded Wes of a young Peter O’Toole in Lawrence of Arabia. “Are the accommodations to your liking?”

“You mean the presidential suite? I only wish I could spend a month or two sailing the Caribbean in accommodations like that.” He sighed.

“I might be able to arrange that.” The captain spun his chair around so he faced Wes. Except he wasn’t a captain, and he wasn’t British at all—

“Sam?” Wes knew his jaw had just dropped to the deck.

Sam Carr—no, Sander Carson, Wes reminded himself—grinned back at him. It was too easy for forget that the Sam he’d married no longer existed. “That would be me.” The British accent was gone, replaced by a hint of a soft southern drawl. Well, at least that was authentic.

“What the hell are you doing here?” Wes demanded.

Sam appeared entirely nonplussed. “Is that any way to say hello to your husband?”

“Not for another 46 days and seven hours.” Sam leaned back in the captain’s chair, causing the thin fabric of his T-shirt to stretch tight over the muscles of his chest. He looked better than Wes remembered. No doubt he had some expensive fitness coach he worked with every day to manage pecs like that. His bright blue eyes were as disarming as they’d always been, the hint of stubble on his strong jaw only made him look more attractive. Like a movie star. Which, of course, Sam—or Sander—was.

“You haven’t answered my question,” Wes said, trying to ignore the jab to his gut at the reminder that their divorce would soon be final. “Why are you here?”

“I had a few days off from shooting, and I thought I’d take her out for a spin. They delivered her last week, and I haven’t had a chance to—”

“Wait a minute. You mean she… this is your boat?”

“Yep. Bought and paid for,” Sam said with pride.

The pieces began to fall into place. Marv leaving suddenly. The shoot in North Carolina. Sam wouldn’t have had anything to do with Carl’s boss’s change in plans, but he’d have known whom to call to find out about Wes’s plans. And Jeffrey. Shit, he remembered where he’d heard that name before: Sam’s personal assistant.

Wes made a mental note to read his secretary, Viv, the riot act when he got back to New York. Which would be very soon, if he had anything to say about it. She didn’t usually handle the details of his personal life, but she had access to his Outlook calendar. Come to think of it, she’d been asking him a lot of questions about his personal life lately. And she’d always loved Sam.

“Contracts can be broken.”

“You never read the fine print, do you?” Sam was clearly enjoying this.

“What have you done?” Wes glared at Sam.

“I didn’t do anything. The studio’s attorneys, though….”

“You set me up.” Stating the obvious. Sam was a hell of a lot smarter than he appeared. And way more devious. “What do you want from me, Sam?”

Sam tilted his head to one side and rubbed his chin as if he were considering the question. “You haven’t figured that out yet?” he asked.

Wes wouldn’t dignify the question with a response.

“I want you, Wesley Warren Coolidge. What else?”

4.5 stars for this lovely, romantic second-chance-at-love novel by the ever so fabulous Shira Anthony.

First off, I adore second chance at love stories, especially when there's a bit of animosity to begin with.

Wesley Coolidge is a History professor with extensive knowledge of pirates. When he's hired to be a consultant on a new pirate movie, he doesn't realize that the lead actor of the movie is none other than his soon-to-be ex-husband Sander Carson, aka Sam Carr.

Sam/Sander has finagled Wesley being hired for the movie, which is being shot on Bald Head Island, therefore mostly cut off from the mainland, except for the daily ferry runs, and plans to win back Wesley's affection after realizing he himself is mostly to blame for the demise of their marriage and relationship. Miscommunication and taking Wesley for granted, while Sam was running off chasing his Hollywood dreams, all contributed to the end of their marriage.

Wesley has no interest in rekindling the flames, having filed for divorce and moved on to a new boyfriend. Sort of. Sam still gets under his skin, but he remains firm in not wanting to start anything again, and seems to basically use his new BF as a shield.

Until he can't, for reasons you'll find out when you read this fantastic book.

Sam makes no excuses for wanting Wesley, and pulls out all the stops to win him, even when he's advised to not make grand gestures, but fails epically at first.

There's a bit of a subplot with the movie director and the assistant, and I actually quite liked the juxtaposition of that developing romance against Sam and Wesley's reunification.

The author's exquisite writing style and beautifully written descriptions of the island and its surroundings painted a complete picture, and I couldn't help but read and read and read until the climactic high-point and subsequent happy ending.

This book won't rate high on the steam scale, and if that's all you're looking for, you might be disappointed. There are really only a couple of bedroom scenes, though the book isn't about what happens between the sheets but about two men, who are still in love with each other finding their way not back, but to a new, better version of their marriage. There is still much hurt and pain, especially on Wesley's side, and it takes time for him and Sam to work through those issues. Both Wesley and Sam have lessons to learn, and I would say that it's Sam who grows most in this book. I may even venture to say that he matures in front of the reader's eyes, especially when he finally realizes that it's not about what he wants but about the man he loves, and giving him what he needs, and actually listening to what he's saying.

A sweet second-chance romance set against a beautiful backdrop, this book will sweep you off your feet. Highly recommended.

Shira Anthony was a professional opera singer in her last incarnation, performing roles in such operas as Tosca, Pagliacci, and La Traviata, among others. She’s given up TV for evenings spent with her laptop, and she never goes anywhere without a pile of unread M/M romance on her Kindle.

Shira is married with two children and two insane dogs, and when she’s not writing, she is usually in a courtroom trying to make the world safer for children. When she’s not working, she can be found at the Carolina coast aboard Land’s Zen, a 35’ catamaran sailboat, with her favorite sexy captain at the wheel.

Want to hear Shira sing? You can listen to an excerpt from a live recording of Shira performing Tosca on her website: http://www.shiraanthony.com/wp-content/uploads/2012/06/tosca-visse-darte-exceprt1.mp3


Where to find Shira: