Hi! I’m Kim Fielding, and do you know what I get to do for a (partial) living? I get to make stuff up! And not just little things, like how one character met another or what they ate for dinner. I get to create people—and believe me, they feel very real in my head. But when even that isn’t big enough, I get to make up entire worlds. Mwah-hah-hah! Writing fantasy is as close as most of us will ever get to godhood. It’s a wonderfully fun thing to do.

But as fun as it is, writing is also hard work. And creating entire fictional universes? That’s tough, sisters and brothers. I mean, sure, you can indulge yourself with all kinds of fripperies. Merpeople. Vengeful deities. Kindhearted giants. Extraterrestrials. Architect werewolves. But you also have to give long, careful thought to how things work, because even if the world isn’t real, you have to make it feel that way to readers. You have to consider the details, both big and small. Geography. History. Politics. What do people wear? What do they eat? How do they bathe, and how often? (I’m writing romance, folks. I’d prefer at least minimal hygiene.)

I enjoy a good story set in entirely fictional places. But perhaps my favorite stories to write—and to read—are those that take place in worlds very similar to our own, but with a few important twists. One of my recent books, for instance, was set in a San Francisco quite similar to the real one, but in a United States where slavery was never abolished.

My newest book, Flux, is the second in a trilogy taking place in a world that may at first appear alien. But I’m going to let you in on a secret—it’s just our old familiar planet, with a few important differences. One difference is historical. In this universe, the Roman empire eventually expanded to what we’d call the Americas, resulting in the founding of city-states that have endured for hundreds of years. No, the residents aren’t living like ancient Romans did because time marched on for them as well.

The other major difference is magic. They have it. Wizards, spells, exotic creatures. As you might imagine, magic has shaped their lives in many ways.

I love playing like this—asking myself What if? and stirring the pot with my omnipotent hands. But I also truly enjoy thinking about the ways human nature remains the same no matter the setting. So despite the other-worldly backdrop, in Flux you’ll find some familiar concepts too. Anger. Greed. Bravery. Despair. And, of course, love.

And you know what’s the very best part of all? When readers come to love my worlds as much as I do. 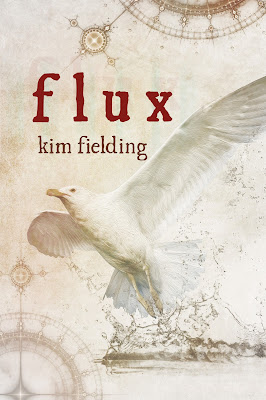 Ennek, the son of Praesidium’s Chief, has rescued Miner from a terrible fate: suspension in a dreamless frozen state called Stasis, the punishment for traitors. As the two men flee Praesidium by sea, their adventures are only beginning. Although they may be free from the tyranny of their homeland, new difficulties await them as Miner faces the continuing consequences of his slavery and Ennek struggles with controlling his newfound powers as a wizard.

Now fugitives, Ennek and Miner encounter challenges both human and magical as they explore new lands and their deepening relationship with each other.


They shouldn’t have wasted moisture on tears. The vomiting hadn’t helped either. By the time the sun set, the bits of Miner’s exposed skin—his face, his hands—felt hot and sore, and both men were as dry as old paper. Ennek had slept most of the day, slumped against Miner’s chest, but as the sky alit with oranges and reds, he stirred.
“I’m sorry,” he said in a sandpaper voice.
“For what?”
“Not being… better. Stronger. Smarter.”
Miner wasn’t sure whether to laugh at Ennek’s foolishness or cry at the man’s inability to see his own worth. He ended up doing neither, instead caressing Ennek’s back under the shredded shirt, murmuring nonsense syllables at him like a parent might to a distressed child. After a time Ennek pulled away a little. His eyes were very shiny, but he wasn’t crying. “I think we’re not far from land,” he said.
“I saw a gull this morning.”
Ennek nodded. “Good. I can try to steer us to shore. I’m not sure how soon I can row us there, though—”

“You’re in no condition to row us anywhere,” Miner said, because Ennek was still pale and drawn.
“Well, neither are you.” Ennek pointed at Miner’s wrist. Then he frowned and took a closer look at the cut on Miner’s arm. “And this is beginning to fester. You’re dehydrated too.”
“So are you. So much water and nothing to drink.”
Ennek looked out over the edge of the boat and frowned in concentration. “I’ll wager I could remove the salt,” he said, almost to himself.
“You’ve already made yourself sick enough doing magic,” Miner protested.
But Ennek ignored him. He knelt and leaned over the side, scooping up a double handful of sea. Then his frown deepened for a moment and he brought his hands to his face. He sipped cautiously at the liquid and then grinned triumphantly. “It worked! Come here.”
Miner considered arguing but decided that would be pointless. He scooted around until he was next to Ennek, also along the side of the boat.
“Get some water,” Ennek said.
Miner stole a glance over the edge and imagined himself hanging over as Ennek had just done. “I… I can’t.”
Ennek gave him a patient smile. “That’s all right. It probably wouldn’t have worked with your wrist anyway. Hang on.” He leaned over again and brought up more water. “Drink it before it drips away.”
Miner leaned down and put his lips above Ennek’s palms. It was a strangely intimate thing to do, to drink from someone else’s cupped hands. But the water tasted only a bit brackish, and it felt wonderful as it moistened his tongue and throat. He drank it all, and then Ennek gave him another handful and another, and he would have kept on going, but when Miner saw him begin to sway and noticed the way his breaths became harsher, Miner stopped him. “Drink some yourself,” he insisted.
Ennek managed to drink only two handfuls before he collapsed.
“Don’t you dare throw up that water!” Miner said anxiously, moving Ennek’s head into his lap.
“Trying not to.”
Miner rubbed softly at Ennek’s temple. He didn’t know if would help, but he doubted it would hurt. He felt so useless, just sitting there like a great, timid lump. Ennek closed his eyes, and Miner thought he might have fallen asleep. But then ten or fifteen minutes later, he opened them again. “This is a stupid way to die.”

Kim Fielding is very pleased every time someone calls her eclectic. Her books have won Rainbow Awards and span a variety of genres. She has migrated back and forth across the western two-thirds of the United States and currently lives in California, where she long ago ran out of bookshelf space. She’s a university professor who dreams of being able to travel and write full time. She also dreams of having two perfectly behaved children, a husband who isn’t obsessed with football, and a house that cleans itself. Some dreams are more easily obtained than others.