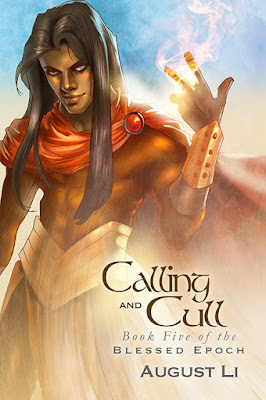 Whose hand will orchestrate the change in the world?

The decade-long war with Johmatra is over, but peace hangs by a thread in Garith’s kingdom. Yarrow, isolated in his island realm, refuses to abide by the treaty or to follow the dictates of the priestesses. Others—Octavian Rose among them—are uneasy with the growing military power of the temples, and the mage island of Espero remains a tenuous ally. Garith knows his people cannot weather another conflict, and that infighting will leave their lands vulnerable to further invasion. The arrival of a Johmatran ambassador with his own agenda calls everyone’s loyalties into question.

Sides will be chosen, and the consequences of those choices will have repercussions no one can foresee. Even among the turmoil, Yarrow is determined to have his vengeance against the thirteen goddesses and heal the world’s magic. But how far will he go, and what lines is he willing to cross? As unlikely alliances are forged and enemies are revealed, Prince Thane seems to be the key to forgotten knowledge that will shape the future—and some will do whatever it takes to control him.

Fashion in the Blessed Epoch

My series, The Blessed Epoch, deals with some weighty subjects like religion, politics, xenophobia, and complex philosophical questions. I’m going to set them aside for today and focus on a lighter, more fun aspect of world building. Even though I don’t adhere to it myself, I’ve always been interested in fashion, especially historical fashion, when people’s garments had to serve several functions along with expressing personal style and status. I’ve put a lot of thought into the clothing worn in The Blessed Epoch, and I hope you’ll enjoy reading about a few of them.

Fashions by kingdom and region

These two kingdoms were, until very recently, the majority of the known world. It has only been around a decade since the marriage of Garith of Selindria to Cothryn of Gaeltheon joined the two great nations and ushered in the Blessed Epoch. Both countries are vast and stretch from cold, snowy, and mountainous regions in the north to semitropical areas to the south. Regional differences aside, clothing is fairly similar throughout the kingdom.

Though industrialization is creeping in, the society is mainly agrarian. Clothing for farm workers is simple: trousers and shirts for men with possibly a vest or doublet overtop. Women generally wear a chemise or underdress with a heavier robe or shift overtop. Footwear is simple and sturdy, and decoration is rare and often considered frivolous. In colder weather, cloaks and furs are worn for extra warmth.

The clothing worn by nobles and the wealthy is surprisingly similar to that of the peasants. Often the only difference is the quality of the fabric—velvet instead of coarse wool for a man’s doublet—or decoration—beading or embroidery on a woman’s gown.

These volcanic islands to the southeast of Gaeltheon are the traditional homeland to the Esperon mages. An older civilization than those on the mainland, it also considers itself more enlightened, educated, and progressive. This attitude, combined with the heat, has led to a distinctive style of dress that is a combination of comfort and luxury. Billowy trousers in light, sometimes even see-through, fabrics are worn by both men and women. Sleeveless tunics and cropped vests are popular, as Esperons have no restrictions against revealing the arms or torso. Footwear is sandals from simple to elaborate. One common article of clothing in a sash worn around the waist and allowed to hang down between the legs. These accessories are often covered in intricate beadwork and adorned with tassels and other trimming.

Both genders tend to wear the hair long, and though clips and bands are used to manage it, extreme styles are rare. Likewise, jewelry is common on the wealthy island, but tasteful pieces of high quality are preferred over gaudy displays. Esperons might like for others to believe they are above caring about their appearances, but this couldn’t be further from the truth.

The archipelago at the mouth of the Kanda River fell under the protection of Yarroway L’Estrella when the mage claimed it as his reward for deciding the Battle of the Starlight Bridge. Before that time, it was inhabited solely by the Emiri race, a seafaring people with a culture vastly different from those living in the kingdom. The people of Selindria and Gaeltheon consider the Emiri corrupt, decadent pirates. Until Yarrow claimed the islands of the Twenty-Nine, the monarchy’s goal was to drive the Emiri from the kingdom.

The Emiri are a people with little regard for rules or restrictions. They have no qualms whatsoever about nudity, and in the semitropical heat of their homeland, they often enjoy going without clothing. While the Emiri place little value on material possessions, they are fond of beautiful things, including brightly colored cloth printed with sea flora and fauna. Of course, the Emiri are even more at home on their ships than on their islands, and when sailing, the opt for functional garments, usually of sturdy leather, that gain a distinct appearance and style by the way the sailors patch and repair the garments. Other uniquely Emiri traits are their long ropes of hair adorned with beads and shells and the permanent ink, called “paint” that covers much of the face and body in swirling, organic patterns.

More than anywhere else in the known world, the elites of the city-states of Johmatra use clothing and jewelry to reflect wealth and power. The trends set forth by the aristocrats trickle down into everyday society as average citizens attempt to emulate the extravagant styles worn in the palaces. Johmatra is a wealthy region, with some city-states richer than others. The desert provides crystals, gemstones, and precious metals used to make elaborate jewelry. The nomadic tribes in the north of the region weave cloth that is highly sought after for its lightness, durability, and the beautiful, intricate patterns it displays. These clans also provide minerals for cosmetics, which only slaves are ever seen in public without, as neglecting to wear makeup is considered uncivilized and in very poor taste.

The aristocracy’s attempts to preserve the bloodline of their illustrious ancestors, Fane—and the genetic deformities that have resulted—have also influenced Johmatran aesthetics. Since close breeding over centuries has left most nobles unable to grow hair, everyone else keeps their head clean-shaven. Hats and helmets mimic the conical shape of the aristocrats’ skulls, and gauntlets imitate the elongated fingers. Wealthy commoners ride in litters carried by slaves, in obvious imitation of the nobles, many of whom are too weak to walk on their own.

The final influence on the Johmatran appearance is, unsurprisingly, magic. Those descended from Fane, the only people permitted to practice sorcery, cut arcane symbols into their skin and coax them to scar, amplifying their power. The common people follow this trend and carve patterns into their skin, though without any enchantment behind them, they are only decorative.


The Future of Fashion


This Blessed Epoch series is, among other things, the story of cultures coming together and people learning how to share their world. The style of dress reflects this, and as trade and travel become easier, the clothing traditions are blending. The recent contact with the lands across the Lapir Mountains, known erroneously in the twin kingdoms as Johmatra, has introduced fine, light cloth to lands more accustomed to heavy wool. Dyes and cosmetics are bringing color to the drabber wardrobes of the Selindrian and Gaeltheonic people—particularly wealthy women.

However, there is a backlash, and decades of war have magnified already present cultural misunderstandings. For many in Selindria and Gaeltheon, appearance has become a symbol of nationalism. Men wears beards to distinguish themselves from the Esperons, who shave, and cosmetics—even among women—are ridiculed as decadent and a representative of the Johmatran heathens.

The revealing styles worn by the Emiri and the Esperon mages have led to greater restrictions placed on the women of the kingdom, who are expected more than ever to dress modestly, in contrast to those who are considered barbaric and perverse. It’s difficult to say whether this trend will last, or if other influences will change the fashion landscape….


Where to find the author:

And if you are new to the Blessed Epoch, the first four books are available here in a special edition bundle. 582K words for only $9.99 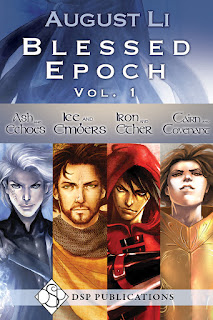