Blogtour: Baby In The Woodshop by Ashlyn Kane/Claudia Mayrant/CJ Burke

Babe In The Woodshop


Hi, Sandra and My Fiction Nook readers! It’s nice to meet you. We’re Ashlyn Kane, CJ Burke, and Claudia Mayrant, here to introduce an exclusive scene not included in our new release Babe in the Woodshop.


So what’s the book about? 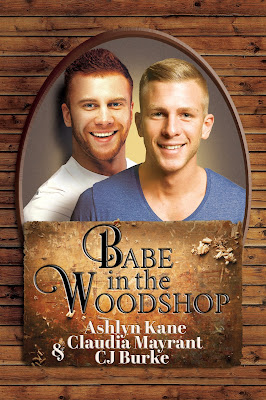 When long hours and crushing stress push Bellamy Alexander to his breaking point, he walks away from his consulting job and drives until he runs out of gas. Fortune deposits him in front of Antonio’s, a place with decent pizza and an opening for a delivery boy. Even better, he finds an apartment right across the street from his new job. And best of all, Chris McGregor, the property manager who runs the custom furniture shop below Bell’s new digs, is super hot—and super into Bell.

It seems too good to be true—and maybe it is. Things aren’t exactly going smoothly. Bell avoids telling his mother the truth about his new job because he doesn’t want to hear how he should go back to the corporate world. On the other hand, he doesn’t think he wants to deliver pizza forever either. He’d like to think about settling down, but Chris runs hot and cold. Between Bell’s uncertainty and the hang-ups Chris refuses to talk about, they have their work cut out for them. Fortune may have caused their paths to dovetail, but it will take more than wood glue to hold them together.

The story is told entirely from Bell’s point of view, and it takes him some time to puzzle Chris out. Watching Bell work it out is half the fun, but we thought we’d give readers a little hint into what’s going on in Chris’s head. Here’s Chris’s take on the first time he met Bell—slightly abbreviated so those of you who’ve read the excerpt on Dreamspinner’s site don’t get too much deja vu.

Chris was just finishing up a piece of trim for a cabinet when the bells in the storefront chimed, meaning Fred had arrived with his dinner. Usually he’d take a break, but he didn’t feel up to a chat, so he just shouted out, “Sorry! Hands are a bit full, but you can leave it on the counter, Fred. Money’s under the ashtray.”
It wasn’t like Fred was exactly a thrilling conversationalist. He was all business when it came to pizza. And besides, he was—
“But what if I’m not Fred?”
The unexpected voice surprised Chris into knocking a finial from the worktop onto the floor.
“You okay?”
Chris turned away from his work and took a step toward the front of the shop. "Fine," he said, wondering why he couldn’t place the voice. But his confusion disappeared when he saw the man waiting with his lunch, because he’d never seen the guy before. Chris definitely would have remembered him: tall, blond, blue-eyed. Sort of sunny-looking.
Chris remembered all at once that he was filthy. It was an occupational hazard he didn’t usually think about, but, well, first impressions. He wiped his hands on a towel. “Sanding makes dust,” he excused. Not the most scintillating opening line, but all he could come up with on short notice. “Where’s Fred?”

His visitor shrugged, looking at—Chris’s towel maybe? It wasn’t the cleanest. Maybe the guy was judging him. “I don't know. Jenny took away my beer and gave me the keys to the Rabbit, along with your pizza, delivery of which did not actually involve driving. But all she said was that there was someone who gets priority for weekends. I assume that’s Fred?”
Ah. So the pizza guy was new in town, which meant he was most likely a student. Chris felt a twinge of guilt, though he thought the guy looked a little old for undergrad.
The conversation unfolded a little more smoothly from there. When the guy—Bell, which was an interesting name—mentioned that no, he’d just run away from home, Chris’s curiosity was definitely piqued. He figured people were more likely to want to run away from Pineville than to it, especially young, good-looking guys who seemed out of place delivering pizza.
Then again, Chris didn’t know much about what good-looking guys did these days, so he made a joke about pizza delivery rules.
Bell made better conversation than Fred, and he was cuter too. But he did seem kind of preoccupied with something. “You okay?” Chris finally asked.
Bell seemed to come back to himself all at once. “Yeah. It’s—you’ve got sawdust in your beard.”
Of course he did. Chris would’ve been embarrassed, except there was no help for it. He had sawdust everywhere; always did. Sometimes he had to shake it out of his underwear.
Bell didn’t want to hear about that, though, Chris told himself. “Oh.” He reached for a new towel—obviously the first had been unsatisfactory—and did his best to brush the offense away. “Better?”
“I just wanted to make sure you get the full Antonio’s Pizza experience, unmarred by any environmental pollutants.” Bell's eyes twinkled when he mentioned the full experience, and Chris could almost believe he was being flirted with until Bell copped to having a background in marketing. Apparently he knew just what to say—and how to say it—to a man in Chris’s demographic, which was past thirty, gay, and single for too long.
Chris was tempted to say something flirtatious back, but he was thwarted by the phone ringing.
A half a minute later he was watching Bell walk out the door.
He should probably get used to that. Even on the off chance that Bell was gay, guys like him weren’t interested in guys like Chris.
Oh well. The view was still pretty nice from behind.

Babe in the Woodshop releases September 30 from Dreamspinner Press.


Ashlyn Kane is a Canadian former expat and current hockey fan. She is a writer, editor, handyperson, dog mom, and friend—sometimes all at once. On any given day she can usually be found walking her ninety-pound baby chocolate lapdog, Indy, or holed up in her office avoiding housework. She has a deep and abiding love of romance novel tropes, a habit of dropping too many f-bombs, and—fortunately—a very forgiving family.

Claudia Mayrant has been exploring the world around her since she was old enough to get around under her own power. Her early travels took her on her bicycle “all the way to but not on the main road.” Happily, since then, she’s enjoyed visiting as many places as she can, from bustling marketplaces and enchanting castles to funky dives. She can’t possibly decide which she likes best, but details of her favorite people, places, and things usually get put in the fiction blender so they can make an appearance in her stories.

Claudia maintains that each new adventure requires the appropriate footwear, which explains her closet. Her passion for taking photographs of the things she sees, does, and eats far exceeds her skill with the camera, but no matter the setting, she has fun trying to get a good shot.

For all her love of travel, she’s most relaxed back in the South on a Gulf Coast beach with good friends, refreshing beverages, and plenty of sunscreen. Her smartphone isn’t literally connected to her hand, but anyone would be forgiven for thinking so.

CJ Burke’s first book was the self-published A Fancy Witch, illustrated in crayon with particular attention to the witch’s footwear. While CJ is now long past first grade, she’s still hunting that perfect pair of equestrian boots.

CJ’s life has always been centered on words. She’s written a couple of those familiar yellow books about computers, and more user guides for obscure software than necessary, but she’s never given up the habit of plotting romances in her head during boring lectures or staff meetings. Along the way, she’s been a lifeguard, an English professor, and a dozen other things in between. In a perfect world, CJ would work between an independent coffee shop and an amazing yarn & fabric store, then go home to alphabetize her spices while dancing around the kitchen to whatever’s on the 80s channel.