Welcome to our second week of celebrating the fabulous

In today's post, we'll talk about the Men Of Myth series, and five little-known facts about Brandon. Of course, all the way down at the bottom will be another chance to win!

First in the Men Of Myth series, Submerging Inferno: 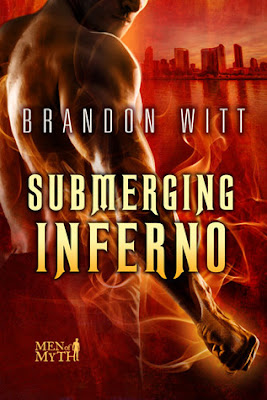 Brett Wright and Finn de Morisco come from vastly different worlds. Disowned by his family for being gay, Brett builds both a life on his own terms and walls around his heart. But nothing can prepare him for the evil that stalks him in the night or from discovering the dark secrets of his heritage.

The youngest of a doting family, Finn lives a sheltered life that allows him to trust easily and makes him quick to jump to the rescue. While using his knowledge of the supernatural world to help Brett uncover the truth of his ancestry, Finn learns neither his magical life nor falling in love is as simple and risk-free as he believed.

New knowledge comes with a price—one that may prove too high for them to pay.

Second in the series, Rising Frenzy: 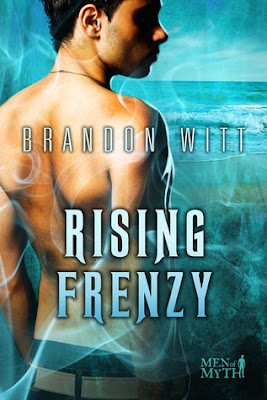 Heartbroken, angry, and hurting, warlock Finn de Morisco can feel darkness growing inside, altering every aspect of his life. There are moments when the man he used to be seems to have been devoured completely. Retreating from his family and everything he once held dear, Finn attempts to escape the despair left in the wake of Brett’s rejection—only to find dangers he never knew existed.

Still struggling with the decision to leave everything he knew behind, Brett Wright is swept into a maelstrom as he searches for his place within his newly discovered family. Life beneath the surface of the ocean should have been unlike anything he’s ever known, yet prejudice over his demon ancestry and homosexuality follows him. Even the existence he begins to build may not last as those he is learning to love face extinction.

I did as told, and was rewarded. What I first thought were large mushrooms were... well, I didn’t know what they were. I didn’t have a word for it. They grew from the ground and had a vaguely mushroom shape and appearance. They varied in colors, ranging from deep browns to rich reds, earthy yellows, and candy-hued pastels. I looked from one to the next. Each seemed to have a different texture. Some looked spongy, others had a glistening sheen like chocolate, still others appeared plump and fibrous, like meat or fruit. The bulk of them had textures that I couldn’t immediately compare to any food-like substance I’d seen before. Creatures, all fairies I guessed, milled around the space inside the tree, stopping to sample randomly from the mushroomlike things, pulling off chunks. Some bit daintily from the edges. Others stuffed the entire portion into their mouths, or muzzles, or gaping jaws, whatever their present form required.

Stepping up to an orangish, spongy-looking shroom, I reached out and touched the upper surface. Sure enough, it sank in like soft foam and then filled back up to its original shape when I removed my pressure.

“Taste it.”
I hesitated.

“Really, taste it. It’s safe.” Schwint’s hand, warm and firm, crept up my back and came to rest behind my shoulder. “Actually, that one’s a perfect place for you to start, you loving pastries and all.”

I curved my fingers into the spongelike texture, gave a squeeze, then made a twisting, ripping motion. It felt like tearing apart a bath sponge, one of those frilly ones that come from some sea creature. A sea sponge, I guess. I lifted it to my lips as my eyes darted to Schwint. He nodded his encouragement. I sank my teeth in.

The texture was nothing like what my fingers experienced. Thick, firm density surrounded my teeth and coated my tongue—like biting into fudge or the center of a chocolate truffle. The spicy scent flooded the back of my throat and instantly wafted up my nasal cavity, completely overwhelming my senses. Pumpkin! Not the cloying sweet syrup-like flavor, nor the fibrous fruit pungency. Somewhere in the middle, not sweet, yet not entirely savory. For the billionth time in the past hour, I let out a groan.


Schwint laughed again beside me. “God, I love hearing you make that sound. I can’t wait until I’m the one responsible for it again.”

And third in this series, Clashing Tempest: 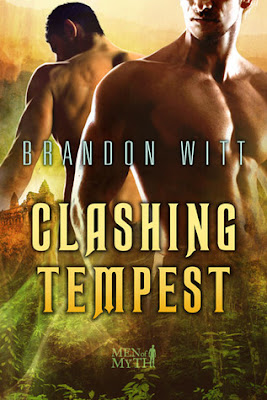 Finn de Morisco knows he is walking into a trap when he enters the Vampire Cathedral to rescue his sister Cynthia. Aided by Schwint and his other sister, Caitlin, he intends to free Cynthia and avoid enslavement. But when he confronts the master of the Voice that has tortured him, Finn faces a grim choice: compromise his soul or lose his family.

For centuries members of the Chromis tribe have disappeared, and Brett Wright is on a quest to discover the fate of the captive mers and to stop the abductions. Despite the risk of tribal warfare, he embarks on a dangerous ocean journey to find other mer tribes experiencing the same plight. When destiny brings him back to land, Brett encounters new allies and old dangers while coming to grips with the past.


Which one of these surprised you the most? Tell us in the comments!


Thanks for celebrating with us. Come back next week for more of Brandon's books, a personal story he's chosen to share, and another chance to win.