ARC Review: Into You by Jay Northcote 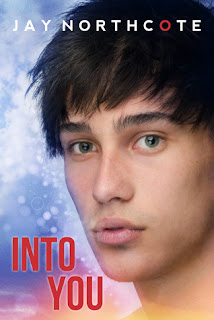 
What do you do when the body you wake up in isn’t yours?

Olly and Scott promised to be best friends forever. They grew up on the same street, went to the same school, and did everything together. But one hot summer night, teenage experimentation caused hurt feelings and confusion, and their friendship was destroyed.

Four years later they’re both eighteen years old and in their final term at school. Scott is a football star and Olly’s preparing for a main role in the school play. After a heated argument in the street—witnessed by their mysterious, elderly neighbour—they wake up the next morning stuck in each other’s bodies.

With no idea how to get back to normal, they have to co-operate in order to hide their secret. Spending time together rekindles their friendship, yet feelings run deeper for both of them. With the end of school fast approaching, the clock is ticking. Unless they discover how to change back, they could be stuck in the wrong bodies forever.

Olly and Scott are in their last year of secondary school, preparing to take final tests that will determine if they get into the university of their choice. They used to be best friends, but one kiss the summer they were 14 changed everything.

Now Scott has a clingy girlfriend he barely tolerates and Olly can't look at Scott without contempt. Scott plays football and takes economics courses. Olly prefers psychology and literature, and is into drama.

When Scott, driving his new car, takes a corner too fast, causing Olly to fall off his bike, they have a shouting match right there on the street. And Olly's elderly next-door neighbor, she of the black cat and numerous plants, isn't happy, because that's not how things were supposed to go.

I've always been a fan of body-swapping stories. There's something compelling about being someone else for a day. Even returning to your younger self, like Tom Hanks did in Big, is an opportunity to see your life from a different perspective.

When Olly and Scott wake up in each other's bodies, they have to work together to figure out how to set things right. Scott needs to rehearse as Olly for a play, and Olly needs to go to football training. They have to become friends again and come to terms with their feelings for one another.

Scott has been living a lie but is scared to come out to his overbearing father. And Olly knows that underneath his resentment, his crush on Scott still lingers.


I really enjoyed this story. I couldn't put it down. It's incredibly sweet and will make you believe in second chances. Despite the rather magical plot, this book is really about being true to yourself and finding that one person who's meant for you.

The narration (dual POV) was a little confusing at times because when Olly is mentioned it's really Olly's soul (being? consciousness?) but in Scott's body, and vice versa. So I would have to imagine Olly looking like Scott (and being Scott to the world) but still being Olly. I don't think there's a way around that though, and I got used to it as the story progressed.

I realize that saying I wanted more makes me sound like a grade A perv (I mean, the MCs are teenagers and live with their parents! ), so I'm not gonna say it. See? I didn't say it.

The story ends with an endearing epilogue that I would bill a HEA, even though Olly and Scott are so young. Sometimes you know your own heart, even at 18.