Hello! I’m Cate and I have a brand new book that just dropped yesterday. It’s called A Fallen Heart and it’s the second book in the Zero Hour series.

Thank you to everyone at My Fiction Nook for hosting me today and giving me an outlet to talk a running theme in all my books: food.

Despite the fact that I have about eight hundred allergies, I love food and every single one of my books includes the characters cooking or eating out at least once (usually a lot more than that). For me, food is a part of all the greatest things in life: huge meals on holidays, indulging during celebrations, fancy meals on date nights out, and sweet and savory breakfasts during quiet Sundays at home.

Often deciding where or what my characters are going to eat is just an excuse for me to look at new menus and recipes. In A Fallen Heart, the boys head out to a diner for boozy milkshakes. Trust me when I tell you I did ample research on all kinds of recipes for this one, but the winner for me was the Irish Coffee Milkshake with Whiskey Caramel from Hungry Girl por Vida.

You can check out the recipe and the drool-worthy photos here: http://www.hungrygirlporvida.com/blog/2013/03/15/irish-coffee-milkshake-with-whiskey-caramel/

Unfortunately I didn’t get a chance to try it out before I got pregnant, but it is definitely at the top of my list of things to make once baby is here! 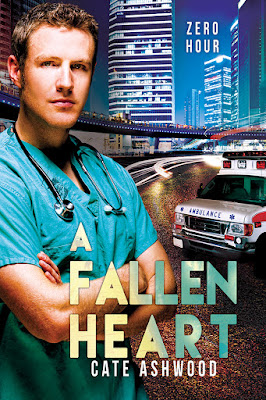 After his last disastrous relationship, Joseph Ford has absolutely no interest in getting attached again. Concentrating on working as a trauma nurse and keeping his life as simple as possible are his only goals. Unfortunately, his plans could be derailed by the charming, sexy Nash.

Things are looking up for paramedic Ridley Nash when he transfers to Station 217. He gets along with the crew, likes his partner, and is finally on a team willing to accept him—gay and all. It’s everything he’s always wanted, but when he meets Ford, Nash knows his life is about to get very interesting.

As Ford and Nash find themselves stuck in the middle of a homicide case, things become more complicated. For the last year, the mutilated bodies of teenage boys have been showing up all over downtown. With no leads, the police are getting desperate. One of the victims is found alive, and he’s the best chance the police have to catch the killer—if only they can get him to talk.

Will Nash be able to catch Ford when he falls, or is there too much standing in their way to make it work?


FORD’S CHEEKS were as pink as the tips of his ears, but the smile he’d permanently worn for the last hour had Nash feeling like more of a hero than he had the last time he’d gotten pulses back during a cardiac arrest. Halfway out of the city, he’d worried taking Ford on a hike was a bad idea, and by the time they were slipping through the gate that marked the beginning of the trail, he’d been sure it was.
But something changed once the city and the noise fell away. The sounds of traffic were replaced by birds and rushing water. It was like a cleanser for the soul. It hadn’t taken long at all for Ford’s sullenness to transform into awe at the beauty of the area.

They crossed Brothers Creek and made their way south toward the Crossover Trail junction. It was downhill and less taxing than the initial climb. He and Ford talked about nothing at all, Nash enjoying his company. He still had trouble believing that three weeks earlier, he hadn’t known Ford existed. He’d developed feelings for him, swiftly and surely.
They passed the junction, and a few minutes beyond was a dense copse of trees, the ground covered in large ferns. Nash grabbed Ford’s hand and tugged him off the trail, navigating between the ferns and up a small hill, far enough into the forest that he could no longer see the trail.
“Are we going to see another giant tree?” Ford asked.

“Nope. We’re going to cash in that rain check,” Nash said.
There was a wicked glint in Ford’s eyes. Nash noticed an overturned tree that had been kept mostly dry by the others. He backed Ford up against it before dropping to his knees. Wet earth soaked through his jeans where he knelt, but he was too focused on getting Ford’s pants open to pay much attention.
“You’re doing it wrong,” Ford said staring down at him, his body already starting to shiver. Nash wasn’t sure if it was from cold or anticipation, but he was about to remedy that either way.

Cate Ashwood wrote her very first story in a hot pink binder when she was in the second grade and found her passion for writing. Her first successful foray into romance writing came five years later when she wrote her best friend, who was experiencing a case of unrequited love, her own happily ever after.

Cate’s life has taken a number of different and adventurous roads. She now lives a stone’s throw from the ocean, just outside of Vancouver, British Columbia with her husband, son, and two cats. Her life is filled with family and friends, travel, and, of course, books.