Add to your Goodreads here. 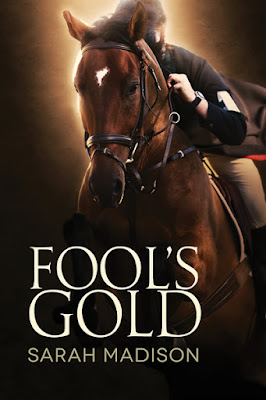 Eight years ago, Jake Stanford had it all: a spot on the U.S. Olympic Equestrian Team and the love of his life, Rich Evans. A tragic accident wipes out everything in the blink of an eye. Hard work and sacrifice get him another shot at Olympic Gold, but only if he puts his past behind him and agrees to work with Rich again.
Bound by secrets he cannot share, Rich was forced to give up Jake eight years ago. Now he has a second chance to help Jake realize his dreams. But the secrets that drove them apart haven’t changed, and Rich must face them or risk losing Jake forever.

In the beginning of this book, golden boy Jake appears to have it all - Olympic-caliber horses he trains with daily, a superb facility afforded him by his father's money, love with a hot boyfriend who works with him at the farm, and a shot at the Olympics with the help of his fantastic trainer, Tom.

Until it all comes to a crashing halt, when an accident on their way home from a cross-country training ride claims the life of three of his horses, and leaves him without a boyfriend, without the horse he planned to take to the Olympics, and almost losing his own life.

Unbeknownst to Jake, his father's machinations in the hospital achieve severing his relationship with Rich, who was also severely injured in the accident. Eight years later, Jake is lonely, focused entirely on training up for the Olympics in Rio, and hoping he'll get another shot at the gold, even if he has nobody to share it with.

This book was an easy read, though I must say that if I weren't a horsewoman myself, I would have found it difficult to understand some of the more horse-related terms. In some cases, I thought that it might have been boring for a non-horse-crazy reader to read about the proper wrapping of a horse's legs before loading it into a trailer, or possibly wondering which part of a saddle a pommel is.

Me, I appreciated immersing myself in the world of Eventing, where not only does a rider have to master a cross-county course, but also excel in Dressage and stadium jumping. It's a hard sport, hard on your body, and hard on the horse, to gallop across uneven terrain and clear Olympic-size jumps, including drops and water jumps. It requires a lot of trust between horse and rider, and an excellent feel for your horse. All too often, either rider or horse, or both, are injured due to the difficulty of the course. At the same time, Dressage requires a perfect seat, shifting your weight and legs minutely to get the horse to change gaits, to extend from a collected trot into a forward trot, or to change hands while cantering down the center line. And on the third day, you get to canter through a stadium course full of twists and turns, while trying to clear jumps taller than yourself.

So clearly, this book appealed to me with all the horse talk. What didn't appeal was Jake's father - even though he did redeem himself in the end. I disliked him not only for his homophobia, but also for his behind-the-scenes responsibility of nearly destroying his own child's happiness.

I liked Rich a lot, the younger version who came across as so carefree, and also the older man, who still carries the scars from the accident, inside and out. I appreciated that he stood up to Jake's father, and actually got the man to see reason, eventually.

The writing flowed easily, and there weren't any major lulls in the story. The writing is also descriptive, and it was easy to imagine the visuals the author described. I liked the relationship between the two men, even though their backgrounds were as different as they could be - they worked well together, and they did talk honestly for the most part.

An enjoyable read, but I wish the book had delved a bit deeper into the changes Jake's father undergoes, as well as allowed Rich to point out the inconsistencies in Jake's behavior. It felt almost too easy in some cases, but maybe that was intentional. This is a romance, after all.

I would recommend this for lovers of M/M romance who have a bit of background in the horse world, or are willing to look up some of the specific terms they will encounter in this book.


** I received a free copy of this book as part of the review tour organized by Signal Boost Promotions. A positive review was not promised in return. **

The opinion detailed in the review is mine.