Hi. I’m Susan Laine, the author of Skyships Over Innsmouth. Thank you kindly, My Fiction Nook and Sandra, for having me here today.
Skyships Over Innsmouth is a Lovecraftian horror story with elements of both science fiction and steampunk, plus an M/M romance side plot. It comes out tomorrow, on August 2, 2016, by DSP Publishing. 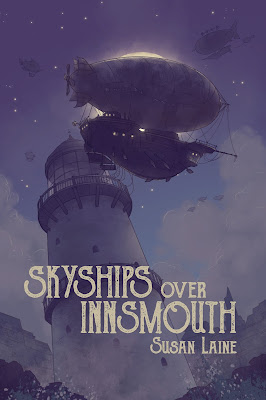 Twenty winters have passed since the Cataclysm brought down society and robbed people of their memories. Humanity, vastly reduced in numbers since the initial chaos, has started anew in Canal City with the aid of library books and steam technology. The Scout and Ranger Corps was established to search for possible survivors and to replenish dwindling resources.

Dev is the captain of the scout airship Smoke Sparrow, and Shay is the scholar of their newest expedition. Their destination is Innsmouth, Massachusetts, a small fishing town that is mentioned in obscure books but shows up on no maps. Might its secrets offer answers? But within the fog-covered, ruined hillside town by the bay lurk unspeakable dangers and horrors beyond imagining. The expedition team soon learns that Innsmouth is one town that should have been left forgotten.

Today, in this guest post, I’m here to talk about horror. As a teenager, I loved reading horror. I read all the best: H.P. Lovecraft, Stephen King, Edgar Allen Poe, Bram Stoker, Clive Barker, Dean Koontz, Ambrose Bierce, Anne Rice, Neil Gaiman… etc. etc. The list is too long to name them all, as I’m sure all readers of horror well know.
Much to the chagrin and occasional amusement of my friends, I regaled them with my own short horror stories, one or two pages long. Basically, I lived and breathed horror. (Of course, I also read a lot of murder mysteries, science fiction, fantasy, and such, but that’s not what this post is about.)
Why so many teenagers love to read shocking stories that frighten them and give them nightmares? Well, I read horror fiction then and now because it scares me… but in a safe way. I became intimately familiar with monsters, ghosts, undead, vampires, werewolves, and horrible ancient gods with tentacles at an impressionable age, scared out of my mind—all in the comfort of my soft chair in the quiet of my childhood bedroom.
Of course, the paranormal subgenre has since the early days separated from what one might call true horror. But supernatural beings remain a staple of horror fiction. Vampires who seduce us with their kiss of death, werewolves who hunger as primitive beasts, monsters who reveal the ugliness within us all, ghosts that warn us of the terrors of the afterlife, frog-like horrible gods dwelling in deep space, waiting to be awakened by foolish humans….
I admit, my tastes for horror fiction have since my teenage years waned. On TV and in movies these days horror seems to be about disgusting and nauseating splatter fests rather than what’s eerily inexplicable and frighteningly unfamiliar. That development disappoints me. Perhaps we’ve just seen too much to be scared that easily anymore. Nonetheless, if I want a chill to run down my spine, I’ll choose to revisit Lovecraft, Poe, or King any day of the week.
To me, horror fiction creates that elusive yet instinctive flight or fight response. I get nervous and agitated, goose-bumps and chills on my skin, tension in my muscles, my imagination running amok, most likely screaming. That’s a wonderful sensation when a piece of literature can instill such a thrill. I can only assume that’s what draws most readers to horror fiction.
Now, whether my story Skyships Over Innsmouth is scary or not… I’ll leave that up to you, fellow readers of horror. A shudder or two would be a wonderful reward from you, and I’ll happily settle for that.
--------------------
Here’s an excerpt for you:
Like the gaping mouths and eyes of the dead, the dark windows and shadowy doorways seemed to close in on them. The buildings seemed more intact the deeper they went into the town, suggesting that the harsh weather was blocked by the outer structures, leaving them to take the brunt of heavy storms and snowy winters. With no one left to repair them, the walls of the buildings were cracked or crumbled at the base, and some had started to tilt precariously while others had collapsed.
This is a ghost town, Malia thought. With so many structures exposed to the elements, it was unlikely anything useful would remain. Birds and wild animals would have gotten to the food and other perishables, while clothing and furniture would be mildewed and weatherworn, likely reduced to rags.
For the first time in her life, at least as far back as she could remember, Malia needed to hear a human voice in the unnerving silence. “You and Shay have spoken much about this place and this mission, then?”

In the stillness, she could practically hear Dev gulp. Finally he spoke, his tone low and hesitant. “Shay might be the learned leader of these expeditions, but I’m the captain of the ship. I need to be prepared for anything. Good background information helps.”
A noise alerted Malia, grabbing her attention, a small scratching sound that reached her easily in the stillness.
“Shush,” she whispered to Dev, crouching, her rifle at the ready. Next to her, Dev did the same, gearing up for trouble. She gave him a nod to move off, and he responded by shifting in a hurry to the other side of the street, into an alcove. Malia snuck into the shadows of a wall and waited for whatever it was in the fog to come to them.
The fog had become thick and heavy, overbearingly damp, and blinding. They had no way of seeing beyond the edge. Malia cursed the inclement weather, gripping her rifle tighter and then releasing the hold because too tight a grip would make her unable to adapt to all manner of looming threats.
The scratching noise changed to a wooden clatter, followed by the padding of feet.
Like silky veils parting to reveal the stage of life, the pearl-gray mist gave shape to a tiny figure, moving sluggishly down the street toward them. Malia held her breath, not wanting to give her position or presence away. Her last indrawn breath reeked of rotting fish, mold, and decay, and she felt like vomiting.
Then she saw….
--------------------


That’s all, folks. I hope you’ve enjoyed this guest post. And thanks again to Sandra and My Fiction Nook for arranging this visit.

Anthropology is Susan’s formal education, and she could have been happy as an eternal student, but she’s written stories since she was a kid, and her long-term goal is to become a full-time writer. Susan enjoys hanging out with her sister, two nieces, and friends in movie theaters, libraries, bookstores, and parks. Her favorite pastimes include pop music, action flicks, eating chocolate, and doing the dishes, while a few of her dislikes are sweating, hot and too-bright summer days, tobacco smoke, and purposeful prejudice.

You can also sign up for Susan's newsletter here.