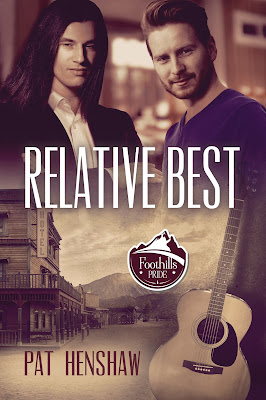 Sometimes love sneaks up when you’re least looking for it….

Zeke Bandy, owner of Bandy’s Finest Hotel in Old Town Stone Acres, California, is too busy for love. Not only does he oversee the operations of the historic hotel and uphold his family’s tradition of offering refuge to strays and runaways, Zeke also sings and plays down-home music two nights a week at the Stonewall Saloon and for occasional celebrations. Then Zeke meets Victor Longbow, the man of his dreams.

Vic isn’t looking for love either. In fact, because of his upbringing in a strict, white foster family, Vic’s not sure he believes in love. He’s in Stone Acres to open a branch office of a national brokerage firm. He’s also hoping to find a vintage photo of what might be his Native American ancestor.

After their paths cross, they become friends, then more. Connected by their experiences as orphans raised by flawed fathers, Zeke and Vic realize that some men must find love, hone it, and create families for themselves.


Yeah, he was too hot for me with his high cheekbones and exotic hair, but I could practice on him and dream, right?

Life at the Bandy Hotel 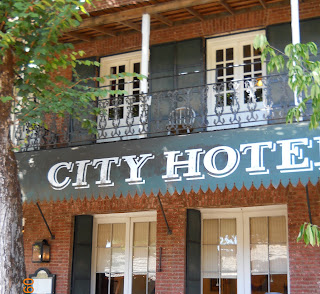 The central structure in Relative Best is a grand old hotel, Bandy’s Finest Hotel, the kind you find in a lot of frontier towns in the West. It stands back to back with Stonewall Saloon where the first book, What’s in a Name?, began.


When I was writing Relative Best, I borrowed details from a lot of hotels where I’ve stayed in my life as well as forts I’ve visited, since the Bandy is a mixture of both.
My earliest recollections of a grand hotel come from the Broadmoor in Colorado Springs, Colorado, where my family would occasionally vacation.
Like the Broadmoor, the Bandy has high, decorated ceilings, wainscoting, and elaborate wallpaper. I remember as a child wandering around imagining what the rooms would have looked like in the late 1800s with the men in their suitcoats and vests and the women in their long skirts and feather-bedecked hats.
While much smaller in scale than the huge multistoried Broadmoor, the Bandy adds a little bit of class and elegance to Stone Acres which has had its ups and downs over the years.
Another influence when I created the Bandy was the much smaller City Hotel in Columbia State Park, California. The Bandy like the City Hotel has smaller rooms with no closets, but unlike the City which has only ten guest rooms, the fictional Bandy has three stories with guests on the second floor and permanent residents living on the top floor.
The Bandy is also much more elaborate than the more austere City. The Bandy has preserved the tall, patterned ceilings and dark wood wainscoting, the dimly lit wall sconces, and the colorful carpets from its frontier past. It also sports an intricately carved check-in desk and a cage-like lift.
I purposely used the word “lift” to describe the elevator in order to give readers a sense that the convenience isn’t carpeted or mirrored and doesn’t look like hotel elevators today. It, like everything else in the Bandy, is a relic of the past.
When the main character Zeke updated the Bandy, he compromised on a full update, so the hotel rooms are a mixture of those suites with full bathrooms and those that share a communal bathroom at the end of the hall.
The Bandy started as a fort where soldiers were billeted four or more to a room with bunkbeds being the order of the day, with the third floor being not a series of rooms but the battlement (walkway) between the protective walls on either side.
When I solidified this bit of history for the Bandy, I turned from looking at frontier hotels and started examining places like Sutter’s Fort in Sacramento, California. While Sutter’s Fort doesn’t have its dominant structure as part of the wall, it is located where I live which made it easy to use as a model.
Fort Ross, near Fort Bragg on California’s northern coast, however, does have a structure that more closely models the Bandy. The Official’s Quarters, established in 1833, not only billeted soldiers but also housed guests like the Bandy did.
Using my memories of all of these buildings that I’ve visited at various times in my life, I came up with Bandy’s Finest Hotel, one of the premier historic buildings in Old Town Stone Acres. I hope you enjoy your visit there as you read Relative Best.


And if you can recommend a historic hotel you think my husband and I should all visit, please tell us about it in the comments.

Pat Henshaw, author of the Foothills Pride Stories, was born and raised in Nebraska where she promptly left the cold and snow after college, living at various times in Texas, Colorado, Northern Virginia, and Northern California. Pat enjoys travel, having visited Mexico, Canada, Europe, Nicaragua, Thailand, and Egypt, and Europe, including a cruise down the Danube.

Her triumphs are raising two incredible daughters who daily amaze her with their power and compassion. Fortunately, her incredibly supportive husband keeps her grounded in reality when she threatens to drift away while writing fiction.