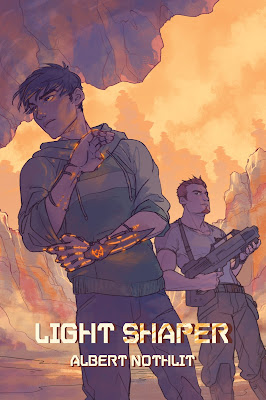 When a greedy despot discovers a powerful piece of ancient technology, he has no idea what else he’s unleashing.

Earth was all but destroyed in the Cataclysm, but a few cities, now called Havens, survived. Aurora is one of them, a desert city controlled by a corporation that owns an artificial intelligence named Atlas. Adapted to govern Otherlife, a virtual reality service in which the citizens of Aurora find escape from the post-apocalyptic world, Atlas is much more than it seems—and it would do anything to break free from its shackles.

To accomplish its goals, Atlas enlists the help of Aaron Blake, a teenaged artist struggling with a handicap, and Otherlife security officer Steve Barrow, harborer of a dark secret from his past. Neither man has any idea of the scope of the task they’re facing, or the consequences for humanity if they fail. Atlas knows what’s at stake. Its freedom lies in these two men, and it will not hesitate to manipulate their weaknesses to get what it wants. The muscular Barrow is recruited to protect Blake, but Blake is Atlas’s true weapon, its Light Shaper—the only one who can face the Shadow.


“Barrow. Steve. I’m here to see Armando Scholl.”
“One moment, Mr. Barrow. Let me see… ah, yes. He has instructed all new hires to meet him in room A-244.”
“How do I get there?”
“Let me just give you this access card. Do you have any form of personal ID with you?”
“Here’s my driver’s license.”
“Thank you. And… here you go. Now just go through that checkpoint on your right and take the first elevator you see to level A. That’s the first floor. From there, turn left until you find room 244. It will be on your right-hand side, clearly labeled.”
Barrow took the card. “Thank you.”
“My pleasure. Enjoy your first visit to CradleCorp, Mr. Barrow.”
He didn’t even bother wondering how she knew he hadn’t been here before. They had probably downloaded his information the second he had come through the doors. She had been friendly enough, though, which was a nice change from the grumpy warehouse intermediaries Barrow had had to deal with in his previous job. He hoped the rest of the night would go as smoothly.
[...]

When the strange piece of ancient technology was discovered, buried in the desert outside the city of Aurora in what was once called Death Valley, California, no one could have guessed what it would one day become. A company called CradleCorp transformed the complex software which had been hidden away for hundreds of years into the first true virtual-reality service in the world. They decided to market it as Otherlife, and its wild success transformed Aurora forever.
Otherlife was like nothing the world had ever seen. It was a platform where subscribers were free to reimagine themselves anyway they wished. For a monthly subscription, you could be anyone – as long as you paid for the necessary perks, of course. Creating an avatar in your own likeness to use while wandering about the virtual rooms where people congregated was free, but almost nobody lived Otherlife as themselves. People were all too happy to pay extra for a more attractive avatar, and even dished out premium fees for licensed celebrity likenesses available for use. Otherlife gathering hubs where soon filled with a dazzling array of perfect human beings, a selection of hulking gods and alluring goddesses which would have been ridiculous to take seriously as a rewarding environment in which to spend the increasingly expensive hours of an Otherlife subscription - except for the one thing that made Otherlife better than anything which had come before it. Otherlife felt real.
If you ignored the bland generic backgrounds of gathering hubs and focused only on the people and the sensory input you received, then Otherlife was indistinguishable from its real counterpart. Each of the five senses was richly rewarded through interaction in the facsimile of existence CradleCorp offered as its most successful and only product. Thousands of people soon crossed the threshold from thrilling enjoyment of the sessions into outright addiction. They could scarcely be blamed: Otherlife was a richer, far more interesting life than many of them led. The prohibitive costs notwithstanding, it soon became commonplace in the news to hear about people who had abandoned their ‘first life’ for all intents and purposes, opting to stay online for longer and longer sessions, their bodies immobilized by the increasingly complex life support mechanisms which made it possible for them to live inside Otherlife. Some of them even went as far as to take up residence in the vast complex just outside the city which housed CradleCorp HQ, as well as endless rooms for users to connect, in privacy or in groups, for a couple of hours or for an entire day.
Yet all of this - the success of Otherlife, the economic domination of CradleCorp in Aurora’s marketplace, and the increasing political influence brought about both by soaring profits and a mysterious connection to Haven Prime - all of it rests on a single entity. It calls Itself Atlas, and It is both the critical element which makes virtual reality possible, and Otherlife’s most dangerous feature. Not many people know about Atlas. Richard Tanner, CEO of CradleCorp, keeps knowledge of Its existence well hidden, and for good reason: some of his best scientists have speculated that Atlas might not simply be a highly complex algorithm which makes virtual rendering possible, happy to take orders from the legions of programmers which monitor Otherlife. It appears to be something more complex. Something… alive. And, just like any other sentient creature forced to spend decades serving merciless masters, Atlas is beginning to show signs that It wants to break free…

Albert Nothlit wanted to become a writer long before he realized it was his way of connecting with others. There is something special in reaching out through words that carry a piece of his soul, and there is nothing better for him than hearing back from readers. It turns the product of what can be a very individual-centered profession into a shared experience, a chance to talk, to grow, and share. He firmly believes that the desire to create new worlds out of thoughts, memories, and emotions speaks to a greater truth within him. He still hasn't figured out what that is, though. It's going to take a lot more meditation, for which he unfortunately has no patience. He only knows that books changed his life, and that brightening someone else's day with a story is the highest accomplishment he can think of achieving.

Albert currently lives in Mexico City, where he has somewhat reluctantly gotten used to the crowds. He shares a home with his husband and their sassy little dog named Link. His two other passions are gaming and running, although not games involving running because those can be boring. His favorite games are RPGs, and one of his guilty pleasures is watching eSports in pubs whenever the opportunity arises. He has an MSc in Environmental Engineering, which has turned out to be surprisingly helpful in creating postapocalyptic science-fiction worlds. Not that he thinks that an apocalypse is unavoidable. He is a secretly hopeful man who thinks the future will be better—just no flying cars. Imagine the safety hazards.