Hi there! Thanks so much for joining me on my blog tour for Keeping Karma, and a very special thanks to My Fiction Nook for hosting!

Keeping Karma is a re-release, but it’s also been cleaned up and re-edited. It has a brand new cover that makes me smile every time I look at it! Of course, that’s probably due to the fact that aside from writing, animals are something I’m incredibly passionate about. My house is full of them! Current count is three large dogs, one weird cat, two tortoises, two snakes, and three prairie dogs. Yes, the small brown rodents who pop up out of their holes and make a barking noise. They’re hilarious!

I’ll be giving you a good excerpt at the end of this, but before I do, there was a very important topic I wanted to discuss: SEX.

Did I pique your interest? Most people definitely perk up at that word, haha. Well, I do want to discuss sex, but in a very specific context. Namely, the volume of it in MM romance novels.

When I wrote Keeping Karma in 2009, it was put out chapter by chapter in a serial format. One chapter a month meant that there had to be a sex scene in just about every chapter of the book. That’s the main reason why this novel has so much sex in it. The other big reason for so much fooling around between Alex and Dylan was simply because it was what readers wanted at the time. Sex sold, and sold well. Things have changed in the landscape of sex in MM novels, and while readers still enjoy a good sex scene, I’ve found that they’re much more interested in the actual story.

The entire MM genre has changed a lot in the past ten years since I’ve started publishing. Social media has hugely influenced the way new books are presented and reviewed. I fully expect that what is popular today in romance will not be popular a year from now, but if you wait, it’ll come back around again. The romance genre is fickle. Maybe books filled with sex-fests will once again be sought after! I’ll have plenty of them to keep readers happy, if that’s the case!

So, if you haven’t read Keeping Karma before, just know that there IS an excellent story behind all the groping! Big thanks to Dreamspinner Press for agreeing to republish it, and once again a huge thank you to those loyal readers of mine. You can read a bit about Alex and Dylan below! 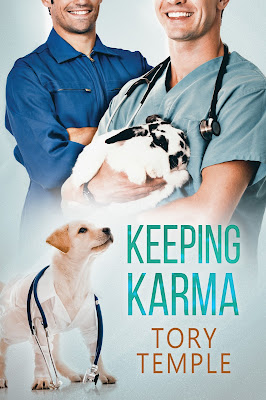 Alex Myers is keeping deeper secrets than just his pet ferret, Karma, who is illegal in California. Both Alex and his twin sister, Tabitha, can “hear” the thoughts of animals. It’s an ability he puts to good use working at an emergency animal clinic while studying to become a veterinarian.

One night, local animal-control officer Dylan Travers comes into the clinic with an injured fawn, and it doesn’t take the two men long to act on their mutual attraction. But the closer they become, the harder it is for Alex to keep Karma and the rest of his menagerie from Dylan. And then there’s the matter of his ability…. Will Dylan even believe him if he tries to explain?

Add to that debilitating migraines from especially “loud” animals and a scheming coworker threatening the clinic, and Alex needs Dylan’s support more than ever. Alex just wants to keep his job, his pets, his lover, and his sanity. But he can’t do it alone.


Alex liked the cards and letters; he knew their clinic wasn’t like a veterinary office with regular clients and patients, but the doctors and other employees still loved animals and tried to do their jobs with all the respect that people and their pets deserved. It was nice when a little note came in the mail.

“These are cool,” Dylan mused. He appeared to be reading some of them and skimming others, picking up the cards and looking at the photographs of the animals. “I’ll pretend not to see this one.” He waved a picture of a ferret at Alex.

Alex laughed. “That’s Bones.” Bones was actually what the clinic could call a regular, since he had a horrible penchant for escaping his cage and finding all sorts of things to eat while his owner was at work during the day. Bones had been in three times for emergency surgery to remove items that blocked his digestive tract.

“Bones is illegal in this state.” Dylan raised a brow and put the picture back carefully.

It was true. There were only two states in the union that still had a law against ferrets, California being one of them. It didn’t stop the clinic from treating them in an emergency, however. Alex knew the Veterinarian’s Oath extended to all creatures, great and small. “Yeah, well,” he shrugged. “You can tell Mr. Penkava that the next time he brings Bones in. He’s about eighty years old and it’s the only thing left he has from when his wife was alive.”

The truth was that Alex knew the animal control officers had a hell of a lot more important shit to worry about than raiding people’s homes to look for illegal domesticated pets. Now, keeping an alligator in your pool or a cheetah in the back yard, that was a little different. But California was full of ferrets that had been snuck in from neighboring states like Nevada and Arizona, and it would be an impossible task to track all of them down.

However, Alex figured he’d just keep the information that he had a ferret of his own at home to himself for now.

Alex was just starting to wonder if Dylan had really come in to find out about the deer or if he was merely bored when Dylan wandered back over to Alex’s desk. “So,” Dylan said, looking around the office again. Alex realized with amusement that the man was trying to look casual about something. “What nights do you work?”

When Alex began to understand what Dylan was trying to be casual about, his amusement vanished and blinky surprise crept in instead. Was he being hit on? It had been so long that Alex had forgotten what it was like.

“I have school work to do the other three nights. I don’t really have much free time.” Alex cursed himself for saying that last part, because the point was for Dylan to ask him out, wasn’t it? At least, Alex thought it was.

“So, you eat breakfast, right? Or lunch?” Dylan was perched on the edge of Alex’s desk again and Alex couldn’t help noticing the way the man’s jeans rested snugly over the firm bulge at the crotch.

He managed to tear his eyes away from Dylan’s dick and focus on his face. The green eyes held a touch of amusement and there were little crinkles at the corners. “Yeah,” Alex nodded, digging his own nails into his thigh under the desk. “Sure. I eat breakfast.”

“Cool. You want to eat it with me tomorrow morning when you get off?”

The words “get off” were definitely not meant in the context that Alex’s cock took them, and he tried desperately to keep his expression neutral even while his prick firmed up inside his scrubs. “Yup,” he answered, pleased when his voice came out sounding normal and not strained. “Yes. Breakfast tomorrow. Me and you.”

Tory Temple lives and works in southern California where she happens to spend a lot of time around firefighters. It makes for excellent storytelling, so Tory definitely uses that to her advantage! She is guardian to three pit bulls who only attack with kisses, two snobby cats, as well as other assorted friends from the animal kingdom. (Husband included.) Her fondest wish is to be a stay at home dog mom. You can tempt her with promises of cheese and/or Mexican food. On Saturday nights, she is usually watching Netflix and thinking about how to get the newest firemen in her head to hook up. Tory loves reader emails and looks forward to hearing from anyone who wants to drop her a line.