Blogtour: The Butch And The Beautiful by Kris Ripper

The Butch And The Beautiful 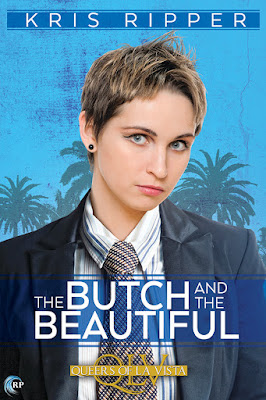 Jaq Cummings is a high school teacher who really wants a committed relationship—as long as it doesn’t keep her out late on school nights or interrupt Sunday mass with her dad. She is absolutely not about to fall for the hot-mess divorcée she hooks up with even if said hot mess pushes all her buttons. Jaq’s white knight days are over.

But one hookup with Hannah becomes two, then coffee, then more incredibly hot sex. And unlike most of Jaq’s exes, Hannah’s not looking for someone to come on strong. In fact, Hannah comes on plenty strong enough for both of them. But she’s just out of a disastrous marriage, she’s in the process of moving across the state, and Jaq can’t take a chance on yet another relationship where she defaults to being a caregiver instead of a partner.

Just when Jaq decides her relationship with Hannah is far too precarious, a crisis with a student reminds her of her priorities and makes it clear that sometimes, you have to take big risks to get what you really want.

Five (Really Only Four) Distractions from Writing
By Kris Ripper


All of these could be “parenthood”. But I’ll try to branch out.

Let’s be clear: sleeping takes up boatloads of time. Way too much. So much that I’m actively annoyed by it. And I’m an insomniac; if I get six hours, that’s a triumph. I’m up for three hour stretches in the middle of the night sometimes, so I try to get that writing time back, wrestling it from the yawning jaws of sleep. (See what I did there?) I used to be really annoyed as a kid when I had to stop playing in order to go to sleep, and the playing I did was basically fiction for kiddos; I always had a bunch of storylines going, and I was always afraid that if I took a break for frivolous things like sleep (or peeing, or brushing my teeth), I’d lose all the tension I’d built up.

Thankfully these days I have a computer and cloud back up. I don’t have to worry about that anymore.

I really resent eating. Sometimes more than sleeping. I’m not a huge fan of food, and the real issue is that the second I’m done with one meal I have to start thinking about the next one. It’s endless! (Or, I’m reminded as my stomach growls, I fail to adequately plan ahead, and then I’m hungry.)

I’ve been trying to branch out (my kid loves the whole shopping-preparing-cooking-eating process), but what it comes down to is…I’d so much rather be writing. If someone invented a pill I could take to get all of my nutrition in at once so I’d never have to think about eating, I would totally buy it.

3. The demands of other humans.


Oh yeah. We all know this one. Kids, partners, parents. Roommates, friends, coworkers. You know. All those other humans who exist not-on-the-page. This is a tricky one. Writing is a solitary thing in a lot of ways, but humans are made for a certain level of interdependence, and I say that as someone with about the lowest level of social needs I’ve ever seen. I need to hang out with friends once every few months to get my fill.

But that one time every few months? Non-negotiable, no matter what I’m writing.

What I like to do when I choose to engage with humans instead of writing is get myself specifically excited about whatever it is I’m in the middle of and sort of tease myself while doing other things. It’s basically, uh, the writer version of edging. Does that sound weird? Right. Of course it sounds weird. But it totally works. Instead of resenting the fact that I’m sitting in someone’s house watching Top Chef, I’m actually kind of enjoying my anticipation of the scene I plan to dive into once I get home.

It’s a little mental trick, and it takes a bit of practice, but I’m far less anxious about being “away” from my work. When I had a day job I did the same thing, lived from lunch break to lunch break, writing stories in those few minutes, and dreaming about them the rest of the shift.

Listen, I’m a grown up. I know it’s sort of the acceptable thing to wax poetic about how busy we are, and how much we don’t have time for this or that or the other, but I’m a grown up. I make my time. I prioritize what I want to prioritize. When my kid wants to do an activity that involves practices, I bring my Bluetooth keyboard and write. If I’m on the hook for a family party, I always have a notebook. I can brainstorm plot and character and rising tension in Gmail drafts on my phone in line at the grocery store.

Am I busy? Yep. Will it ever feel like there’s enough time to do everything I want to do in the day? Probably not. It seems like no matter how much or how little I’m doing, I’m always the same amount of busy. I remember being busy before I had a kid, and now I look at people without kids and I think But what do you do with all that free time?

But do I really, seriously allow other things to get in the way of my writing?

If I can’t make time during the day I carve it out at night. I type with my eyes closed, swaying in my seat. I scribble in a notebook while ostensibly playing Rescue Bots or Littlest Pet Shop with my kid. In short: I don’t prioritize a lot of things because I prioritize this, and I’m not always proud of those decisions.

You will never hear me complain I don’t have time to write.

What’s the thing in your life you make time for no matter what? Do you feel like people look at you a little judgey if that thing is an “all for you” activity? It feels like it’s so much more acceptable to work yourself to the bone for other people, but taking time out for something that inspires you is considered sort of selfish. Bunk, I say!

Kris Ripper lives in the great state of California and hails from the San Francisco Bay Area. Kris shares a converted garage with a toddler, can do two pull-ups in a row, and can write backwards. (No, really.) Kris is genderqueer and prefers the z-based pronouns because they’re freaking sweet. Ze has been writing fiction since ze learned how to write, and boring zir stuffed animals with stories long before that.

To celebrate the release of The Butch and the Beautiful, one lucky winner will receive their choice in ebook from Kris’s backlist. Leave a comment with your contact info to enter the contest. Entries close at midnight, Eastern time, on August 27, 2016. Contest is NOT restricted to U.S. entries. Thanks for following the tour, and don’t forget to leave your contact info!